Quite a good week and a varied one too :)

Well this week, various things have been going on and i'll sum it all up. Here goes.
Saturday:
Well this was a quiet day for the beginning, then a friend whos also a customer called and i ended up working overtime and i didn't fix the problem there and then. My lunch for that day was this:

Then in the evening i was relaxing and playing games on my desktop or playing ps3.
Sunday:
Well this turned out to be a rather interesting day. First off i was slightly tired but i woke up, listened to music, had lunch:

Then i decided to remake one of my older vlogs. now this was due to the fact since the weather has been amazing during that past week and i wanted to talk about some things. Here it is:
Its quite a long video and took about 8 to 10 hours to edit over the course of two days. Not bad but it was hard to hear since of the distance. But i'm looking into ipod touch underwater cases so next year or later this year might be intresting. That and it was funny with the middle section of that vlog. when i crossed the river, i had to cross it twice both ways. The first time was for carrying the bike across, which i got through safely, then the second time i had to carry my shoes, this was easier to walk with but i chucked it and one made it to the edge but one fell into the river and started floating so i just caught it and got part of my shorts wet, as you saw. That and then cycled to Gem Bridge, again as you saw. Then i cycled back home and had a shower and started to edit the video.
Monday:
This was a quiet day in work but i had to chat to Eclipse to sort out the issue i mentioned on Saturday. Then had to go to Browns hotel to check how much ram their receptionist's desktop could take. The receptionist had one of them cute, charming, innocent voices and her name was Chloe and had blonde hair. So i used speccy to check the specs. Turns out it was a gigabyte AM2 board that could take up to 16GB of ddr2. So my boss ordered a 2GB stick. Then this was my lunch i had for £1.49:

Then later on my boss did a order from one of our suppliers and parts for a custom build range of machine that my work sells. Then i got one of our older but more expensive machines to sell and reinstalled windows which creates a recovery partition. it captured the "image" and it can now reinstall using the hdd. quite good :). Then i ran home and continued editing the vlog i posted on sunday.
Tuesday:
Well this was quite a busy day at work. Fitted that 2GB ram for Browns hotel, built that PC that arrived from the supplier. that and some other jobs around. Funny thing that i cycled into work as well, anyways my lunch or that day was this:

Then i cycled home and my seat was wet :(, but dried it up and then relaxed and played some fat princess and Simcity 4, in the opposite order.
Wednesday:
Well this was just a nice staying in a relax day. But i did manage to have a chat with the Devs from Ridge Racer Unbounded, which to be fair, i did give alot of hate for. But recently my minds changed on that game. My lunch for that day was a nice Tika:

nothing important happened after that.
Thursday:
Well this was a nice day at work, was mostly tidying up but some relaxing as well. I did have a quick fap over one bbw model which was quicker than the girl i love since of the size difference and appetite, but then got changed and freshened up and then cycled off into work about 9:30, going along the railway line and viaduct then i saw the colleague just after me when waiting at a road to cross. so he crossed and cycled on and i was a short way behind, being passive with traffic on either side. Then helped out on various jobs and lunch for that day was quite a bargin and still under £2

Then i left at normal time after having a look at a dell with a apparent overheating problem, which i found a bit of dust in the heatsink. Which i cycled back and a package i ordered on monday or tuesday arrived. An ipod dock for my bike. It fitted quite nicely after 20 minutes of being accurate and tightening the screws for the dock. It looks very nice :)

Good Friday:
This was a nice day and decided to do some daring but casual things. It was another cycle trip to plymouth, this time i tried to go on gem bridge, this time it was easier to get to but the other side's ramp wasn't completed or bordered off which was a pain. So i went underneath and crossed the river by turning my jeans into shorts and walking across, it was easier than the other river i crossed but was still tricky, i did slice my right foot slightly but that was when i was taking my shoes and socks off.
Then after getting to the other side, i cycled back on the path through magpie viaduct and through a posh estate in horrabridge, then followed the path to yelverton.
Once i got to Yelverton, i decided to floor it since it was about 12:15 and usually i get to Mcdonalds in Plympton by 1pm. With that in mind, i rushed to get to Plympton, but also i had the chance to test out how recording on the ipod dock went. You can see the footage below:
So then after cycling down Plymbridge woods in sunny weather, i got to Mcdonalds in Plympton about 1:15pm. Here i brought a fair bit of food for £8.47 and won a apple pie and a Mcflurry. But i gave them to a girl that works there to give to Charley who was working there at that time but must of been at the back so i didn't see her, but at least i hopefully brought her a mcflurry like a said i would (thats if she got the ticket and used it, not sure she did) but heres the lunch anyway :)

it was really tasty but took about 15 minutes just to enter the three mcdonalds monopoly millions codes on my ipod using safari and tweeting the pic above.
After that tasty meal and giving the instant wins to some girl working there that was standing around the bin to give to Charley but gave me evils or weirded out look at me, i decided to walk and have a browse into currys, then comet then i cycled to Marsh Mills retail park to have a look in PC world and Halfords. PC world didn't have RR unbounded and there amount of AMD graphics card were not that nice or cheap. Halfords Cycle dept was much busier than last time i went in though which was good :) 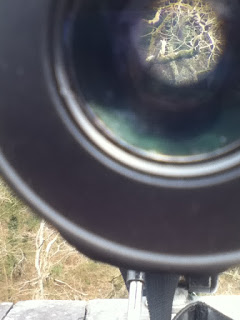 Well at 3pm i decided to cycle back and my legs were starting to feel the pain cycling back through Plymbridge woods, but i did get a nice shot of a Plymouth Peregrine. It might be hard to capture but you can see it on the right of the picture. Then more cycling and i was rushing to get back, walked up the steep bits of the hills along the way back, then as i got to the moors, i was cycling on the road to long ash and following the NCN 27 route on the road, but my boss saw me as i was, in his words "racing along like a crazed dervish".
Then i got back home around 5:30 and got changed then started editing the video of the test footage then had tea then edited for the rest of the evening then got in bed about 10 ish then uploaded the video and started writing this blog post. But i had a prank phone call from Lauren Wise and she chatted and asked how big do i like "my girls" to be. I said around 20 stone (around 300lbs) to 40 stone (500lbs) which shocked her then she asked me about the girls i like and then the top ten girls i want to sleep/have sex/get laid/bone/fuck with and i said them. She was shocked at some of them, one of which she said "was a right dog", but i said my reasons and said ok with a small laugh. Then i headed out to sleep.
And that is when i leave it here for now. But except the fact i've had to finish this on Saturday so, that was a nice day, quite quiet in work, i did fap over the girl Lauren called a "right dog" but then freshened up and cycled in at normal time. Then it was testing a overheating laptop which i had on for over 4 hours and was still working, which mostly was to watch my youtube subscriptions which was alot since HappyCabbie did private videos as an april fools joke. "oh ha ha". But after that i attempted to solder a powerjack with a soldering iron i ordered to replace the one i broke by accident. After that was tidying up and customer advice, then cycled home and put the bike away then get into relaxing clothes and finish this. My lunch though was a large pasty and space raiders and a "kids drink", all for under £2 :)

Thats been this week, before i go, i'll leave you with two things.
1st thing is Happy Birthday to a friend of mine, Whippin Sean
2nd thing is enjoy a pic of me on the bike taken on the ipod dock during my bike ride :)
Have a good easter and week from me, i'm off to have a nice indian for tea :) 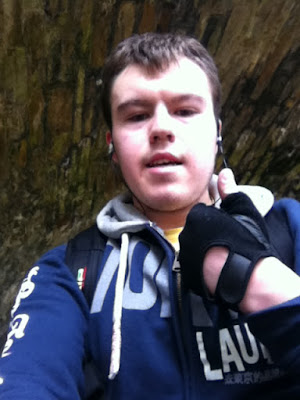 Newer Post Older Post Home
Also check out some reviews here
Also something about getting data, texts and phone minutes for nearly nothing (only if you OD on mobile data) and don't mind using the 3 Network is worth a click of FreedomPop