From an exam to a tablet to buying an Early Valentines

Well its been just over a month since i've post. And to be fair, in my life, not much has happened in my life except maybe two things.

I'll explain them for you now.

So this a day when i planned to get one of my New Years Resolutions sorted. Which was "To earn a Microsoft Qualification". So i booked the exam for it two saturdays before, paid Prometric and got a conformation for dates. Now the exam is for "Windows operating system fundamentals" which is basically an exam for learning basics in various parts of Windows 7, from upgrading to the OS, to using the right program to encrypt files. With that i leave you with what happened in the vlog:

After the exam, i went to Pizza Hut which was a 15 minute cycle from where the exam center was. That was tasty and while noming on a starter set to eat since i couldn't have the unlimited pizza or pasta since it had cheese in it. That cost me £6.95 which is below:


You see me eat it while explaining things i've done and current topics like the Gay marriage proposal, and how it would actually benefit the UK. Well done for the law being passed though, hours later after i recorded that. The funny bit was, i cycled in a BLIZZARD, yep, the snow had now touched my skin and did exist this year. Then after the exam it cleared up and was quite nice weather, and i did have to clean my bike when i got home. Also while cycling to and from Plymouth, the trail after Magpie Viaduct was obstructed. But i'm not surprised with all this recent wind and rain the UK has been having, or mainly Devon.

So i've also been intrested in buying myself an andorid tablet, now as you know. Andorid tablets are budget (or more expensive) versions of iPad. Now i've wanted to buy one which is under £100 and has a good resolution and it cost me £60 from Misco  . This is a GoTab GBT740RS. Now this tablet i will do a blogpost to review it but it is a pretty good Andorid 4.0.3 tablet.
OK trying to root it was pretty difficult but to sum up. I accidentaly nearly bricked (which i fixed) the tablet and couldn't turn it off. Now after draining the tablet out of its battery life, it has fixed that problem, as least as of 11/02/13. But i would get one while you can and hope its a good one, my work ordered one, from misco and turns out the touchscreen was faulty, reminds me i better remind my boss about that needing to be returned. 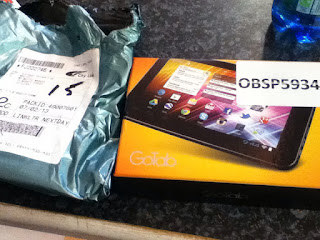 Now with 2 intresting events in one week. It was time to sort it out and get the girl i love's Valentines present and deliver it to her. Now as some of you might very well know, last year i outdid myself with the amazing story of delivering her £250 in cash. If you want to read on the story regarding that, click HERE.
But this time it gets slightly different, with Emma now on holiday this week, it was quite a worry wondering if it was worth getting her something.

There was an original plan 3 weeks ago to get some custom cupcakes ordered in with icing that said romantic things like "You are an angel", "I miss you so much" and "I love you". However that plan failed when i asked for a quote of that and the person i asked couldn't get them for today. Bit of a shame, but i do plan to use "Manda Moore's Cakes" to order some at somepoint this year, don't fret.

But after waking up at 9:40 after dreaming about me and emma together, i decided to prep up and get cycling to Plymouth. Leaving Tavi at 10:40 and arriving at 12:35 just below Drake's Circus. On the way though, i bought the present, which is actually a repeat of her 21st birthday except half value. But it still looks the same old design which is really good:
Now after browsing various shops and also buying a new pair of jeans from Primark. Now these were redued "twisted" jeans from a company called "Denim Co" and they are a 32" waist and length of 30" and they orginally cost £15 but they were reduced to £7, i've tried them on and they fit quite nicely.
Also i enjoyed a quick taster of Disney Epic Mickey 2. Now that game i wanted to try out, the controls are good but camera is really tricky to control. But it was quite good seeing Fantasia references and yet again, those mischievous brooms chucking water all over the place but seeing Yen Sid's lab was quite cool.

Now i bought the card from Clinton Cards, it was a cute one related to this range of cards they offer. That cost £3.00. Afterwards i went to Tesco Metro which then i wrote out the card on the lottery table, noone noticed luckily. But after that it was near 1:30 and Emma's kind hearted friend was supposed to be in town and eventually we met up by the sundial and i handed it to her then wished her luck on her boob job tomorrow :).
After that i decided to walk around then i ordered some Mcdonalds. A nice large big mac along with a big sprite and fried. This cost me £4.65 which is quite nice. Also i found there theres a 9.99 offer which looks sooo good and i will buy that often if i did get the chance to be with a girl. But for now, admire this pic of the food :):

After that i decided to cycle home and my legs were tired but i made it back home  in 2 hours or so. Since today was pancake day, i'll top this post off with the 3 pancakes i had after tea tonight :)

Well next month is not going to be as busy but hopefully things might end up amazing for me but its unpredictable but we can hope for the best.

See you in the next blog post or vlog

Mattie/omracer
Labels: 2013, bike, day, emma, emotions, Exam, food, Giftcard, Microsoft, MTA, Pancake, pizzahut, plymouth, Shrove Tuesday, Valentines
Newer Post Older Post Home
Also check out some reviews here
Also something about getting data, texts and phone minutes for nearly nothing (only if you OD on mobile data) and don't mind using the 3 Network is worth a click of FreedomPop