omracer's Night out: The Wet, Wild and exhausting one

Well, its the start of a week to myself, and what better way to start it than to have a long night out and go wild in the wet weather that was on the Saturday Night. It was a impressive night out, some good music, spent under £10 for the entire night (i'll get more into that later), hugged some girls and flirted and danced with some (even on video, which is why the vlog might be delayed, so i can edit them in). Here goes...


So i had work during the day, it was quite busy with some IT problems and lectures here and there, but i was also making sure both my ipod and my new phone were fully charged. Which it was and saved alot of panic, well partly panic since the GPS was not as powerful as the Tipo without a data connection. But i did get a nice £1.73 lunch with 2 Gingsters Chicken Slices and a expensive drink that was reduced to £0.40


After work, i ran home and made sure i've got everything i needed and cooked tea, i also was watching Despicable Me for the first time and i do say it is a good movie and it makes sense that a sequel has been made. But the tea was a small snack but full of carbs to give me the energy i needed, which was some Thai Noodles and Chinese Rice and of course some extras i usually add:
After that, it was about 8:35 and i rushed out of the door, but thinking i had taking everything, which i did for the most part, except i forgot my glasses which were NOT in my glasses case, it would of been nice to use them but only for the run home to be fair.

So i got to the bus stop about 8:50 and then got on the bus. Paid £4.80 for a single to Mutley and it was a quiet journey in, even though there was a girl i'm friends with on facebook that sat on the seat in front of me, i  don't think she realised who i was but i saw here out later and she smiled at me, which is fair play. Then i got off the bus at Mutley and this is where my vlog begins... 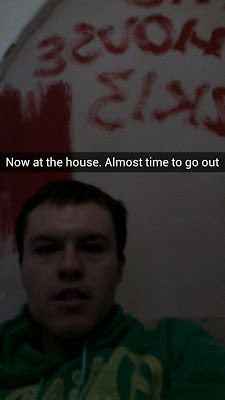 Then we were watching one of the matches on BBC3, then flipped over to "The millionaire Drop" or some show like that. Which had some girls on there with betting money on which answer is right and all that. The questions i saw were:
After that i run to oceana since it was nearing 11pm. Which of course if you get in before 11, its free. So i ran a unique route, since i can't use GPS offline, i couldn't record it using my tracks, but i have embedded the route below.

It was quite a easy route, although it was steep at the beginning, it was much quicker as James mentioned to me, so i got in there and it was looking quite nice as per usual.
Now i got in, passport worked fine, bouncer smiled at me. Then i went to the toilets, which is standard quality, but a piss is business to be done. After that, i checked out whats happening on my timeline, possibly facebook as well, then i received a few snapchats. I would talk about one and also what happened regarding that, but its a bitchy thing, which i don't feel would suit this post.

Later on the main club was open and it was getting busier, with various dancing scenes at times. it made it quite fun and the night was getting better at various points. But i've been in about 5 or so pics with girls and guys before midnight. If i find some, i'll link them here.
One of the funny stories to go with the above pic,  which i did kinda plan out. To sum this a up, a beautiful girl at the bar which i've known and liked her, was waiting to be served, as well as post right next to her, so i walk to the other side of the post and wait to be served some tap water, then these guys were next to me and wanted a pic, so this was taken then i had to write a note on google keep to show the bar staff, she smiled and got me the drink. While that was happening, the other girl peeped around and smiled at me, it was like a awkward "hi" but it still made me happy, that and seeing her arms was a bonus.

During the time in oceana, there was a different blonde that was trying to set me up with some girls, bbws in particular which was quite cool, although it didn't work out for me in the end, it was quite a fun idea and nice to chat to her. Many of them were quite not interested in me or were dating others which sucked but there could be a next time idea.

Also i've had about 3 people ask me if i actually eat the meals that i post on twitpic. I said to them that i do, it  was kind of surprising to them. Also i was getting some people being surprised at my dance moves, even a couple of people asked me to teach them how to dance like me, which was quite good lol.


From Oceana to Jesters.

At about 1:15am, i decided to run to jesters and it was quite a quick breeze to get there. So i got in there, paid £4 to get in, which was the last amount paid for the rest of the night. So i went on to the dance floor and started dancing then the girls i was supposed to meet up with noticed me and were in shock then Bronti came over and hugged me and we danced pretty hard.

Afterwards it was nice just hanging out and a bit of dancing with some more girls, i nearly lifted one from the floor. Also when i was dancing, this guy literally shoved his fingers in my mouth, i have no clue why. Then it was more dancing, especially a pretty sexy girl who is my type and i did text her a while back but that didn't work out so well, more on the how did you get my number backfire way of things, she even hugged me which felt good too :).

There was a point when i was chatting on a picnic table with a few girls, 2 of which i've fapped over and danced with. We chatted about food related things and a friend of theirs was asking what gets me off and then it turned into wages when someone asked me how much a taxi would cost to get me home, turns out i was sat next to a guy thats 21 and gets £1,300 per month (ex tax), made me feel pretty small there but its not too bad.

Later on after getting a glass of water and more dancing, i decided to go toilet and there was a valet in there, he would put any spray/perfume you wanted that was shown for only £1. That was tempting but i declined on the offer. Then it was nice to just sit and chat with bronti and her mate jay, we ended up doing a lap sitting pic together at one point.

But after that, it was time for me to head off home and start running on a 4 hour journey. But along the way i went into scholar to have a look around and also i looked into Goodbodies to see what the fuss was about and its an amazing place, it feels like a truck stop cafe but in a really cosy setting and the food was reasonably price but massive quantities, which might be perfect to help fatten a girl up on a night in or out before having sex perhaps. After that, it a knackering run up hills, streets, main roads and other usual ostacles in the journey. Below are just some of the sights i found on the way back.


I got home about 6:55 and then got chaged and got the nice drink above, then i decided to have a power nap afterwards, then started this blogpost. Then it was a nice afternoons at my grandparents house.

But this night has helped me get somewhere or maybe a chance with a girl, its a long shot but if i focus alot more on what needs to be done then it will hopefully be worth the effort, i wish i could be with emma alot more in. But i think i have to wait for a while before dreams could come true with her.

Anyways, my eyes are drowsy, i hope this gives you a nice glimpse of what this night out had in store for me and maybe there might be another in August. But for now, its more minor vlogs and also Coming Soon, its time for another set of these very very soon.
As always with shoutouts, they are added to a list, if needs be, it would be nice to have different people included. So from then on, Tweet me, Facebook Message me if you would like a shoutout for the next 100 people.

Good Luck
See you soon
Mattie
Labels: dancing, dark, flirting, food, girls, jesters, moors, night, night out, nightclubs, oceana, omracer, plymouth, running
Newer Post Older Post Home
Also check out some reviews here
Also something about getting data, texts and phone minutes for nearly nothing (only if you OD on mobile data) and don't mind using the 3 Network is worth a click of FreedomPop