omracer's Night Out: A BBQ with comforting company

So, with April nearly over, my mind reflecting over things and even decided to walk out of my best friends life since its just going to hurt seeing her happy with someone else. I was invited for a BBQ at the house, with the weather "hotter than athens" it was the houseood excuse to go. And this was while i was finishing off my review for the Dragon War Silvio Keyboard.


Also i'll mention this now, i did get a Feabie account, long story shorts its like fantasy feeder but with a nicer bunch of folks (and yes i've nearly flirted with trangender folks on there :O) and a facebook feel. Its free until august but there is some premium options and a limited free version.
There are a few people from Exeter and Plymouth (but no pic so whats the point and they are guys too).

Work was fine and more so on the quiet and wiping side. But at 4:40 i was rushing out and after taking some extra ££ with me i was home and ready to get changed and shower to make me fresh for this evening. I thought i decided with different jeans since i don't know but the shirt was still the ideal match, however after catching up with excited dogs and being asked how I know a receptionist that my sisters new boyfriend knows, I had the shower, fresh as always and then got changed into he usual plus a light jumper since it might get cold later on and the wind is stronger with this one. the run from 18 minutes past ended up a walk as my legs were tires from pelting it up home just 20 minutes ago, sure I needed other things, but I got on the bus right on time.

This was the 83 so I could pass and get off at Morrison's and buy some goods. the £4.50 was paid and a relaxing journey ahead of me was upon. there was more people on this bus, but its a double decker so it should be fine.the moor was full of sky blue scenic beauty. By 18:15 I was at morrisons and then out for a toilet break and then time to shop, which was for 2 things:

searching for those was OK, I did get some good deals and £9.50 was my total spend. Cl that was for 2 packs of 8 burgers and 2 packs of 6 burger buns. it was funny with the till playing up and the assistant popping over 3 times. But then it was time to run to the house:


Searching for those was OK, I did get some good deals and £9.50 was my total spend. Cl that was for 2 packs of 8 burgers and 2 packs of 6 burger buns. it was funny with the till playing up and the assistant popping over 3 times. But then it was time to run to the house:


A catch up to wait for others

I got there about 5 to 7 and it was just chillaxing and waiting for the BBQ to start with nath doing a chloroform joke and I was noticing 2 other girls here. Rochelle and Sammy. they were nice and all. But the chatter was hard to pinpoint so the jist was pretty much


At various points we were all listening to 90s tunes, Vengaboys cher and other tracks which were actual early 2000s hits. but bbqs #throughglass with burgers and meats being cooked.

Later on, Eloise, Lexi and Harry arrived, a bit late but better than others. Everyone greeted and Lexi was being herself. But soon i heard that jake was at co-op, i went over there along with nath and a mate i can't remember his name and then i browsed for various things, ideally, i was looking for waffles, which there wasn't any of, i noticed a big ass madrina cake, which was £6.49 but now £4.99, i hmmed and ummed and then ah why not *purchased it*, both were shocked that i bought it in the end.

When i got back to the house, they were shocked but James was well into the cake, but i put it away in the kitchen then it was time to have the first bites of burgers and also there was some fun feeding, yup, i told rochelle about feederism and she was quick to catch up on it, shes a gymmer so she was into the Gains and all. But #throughglass, the quality was good. 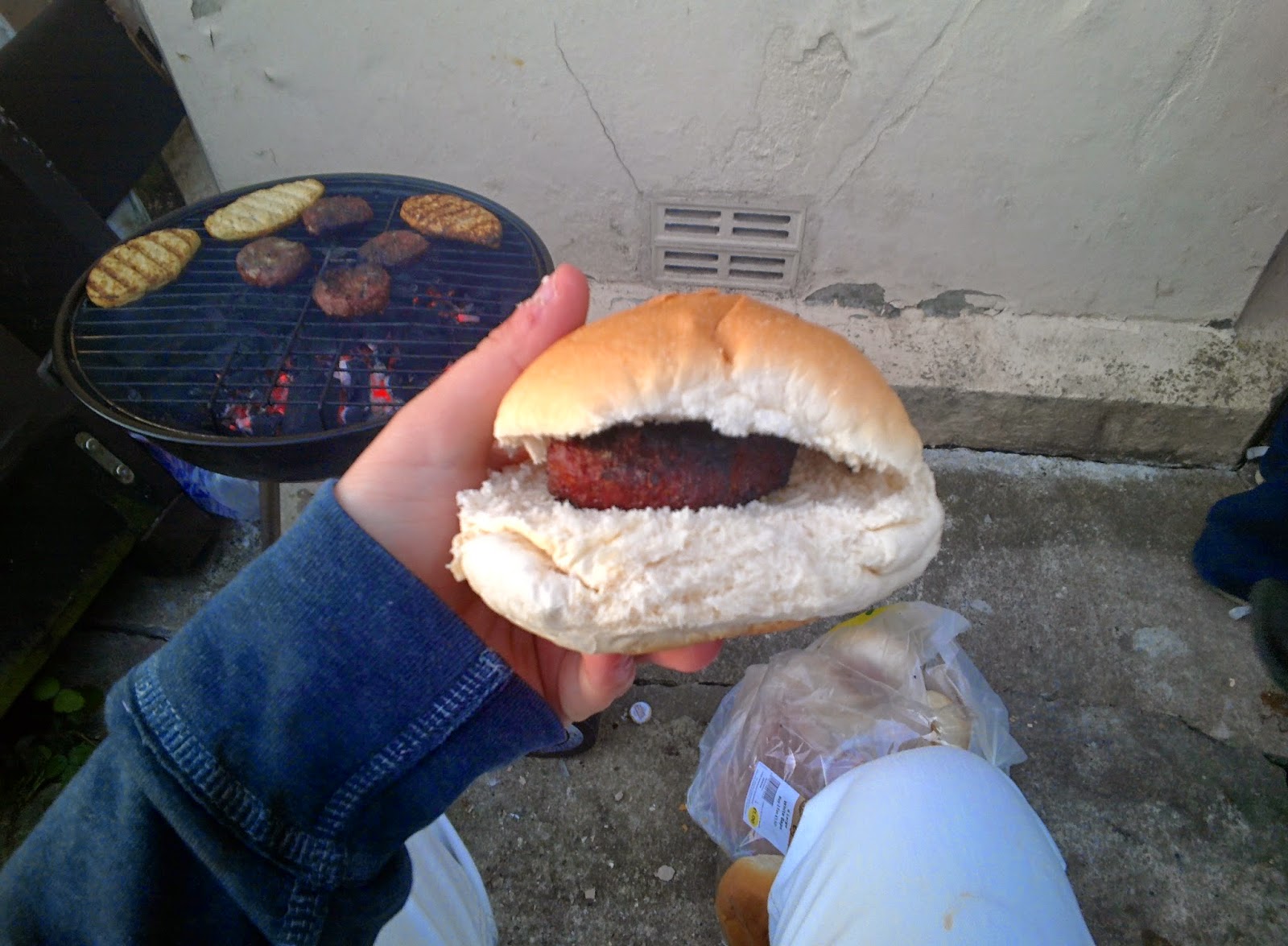 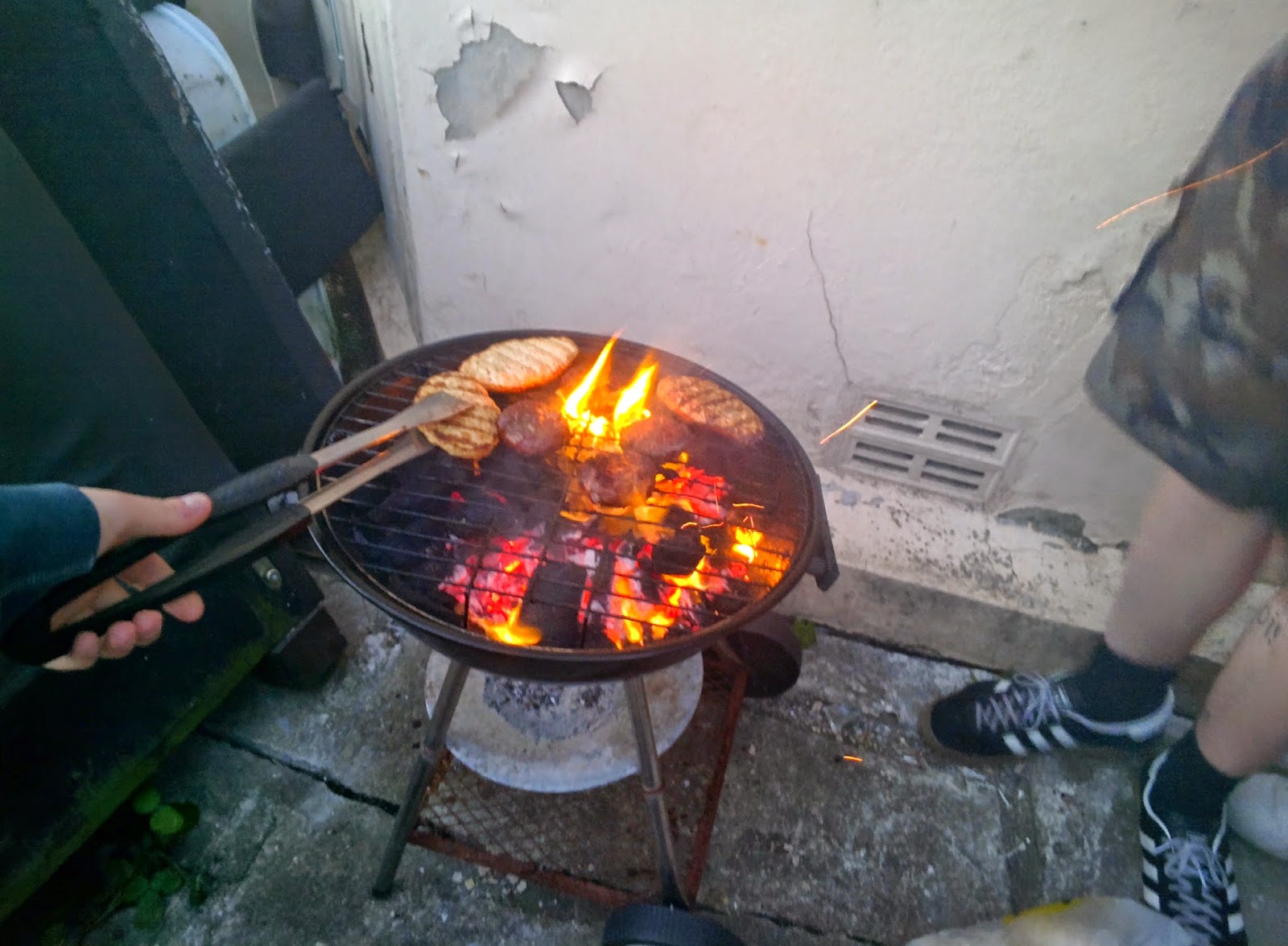 First BBQ feeding in 2015 by omracerfaps
But then there was some mini fall outs, phone calls (not mine), and it was like 3 groups, the kitchen, just outside the door and then the BBQ itself. I popped around all 3 at various times, there was a few things in but mostly deep talk. Ok the conversation about the US and actually how different things are and even the cleaner air over here while cleaner streets and cheaper over there and even how Canadas is similar to the US. But there was a talk of how i once put wooden pegs on my dick to help it grow i thought when i was younger.

By 10:20 I popped out to to get a drink. not much on offer from either Texaco or co op. Well there were cheap cans and Mountain Dew for £0.99 in Texaco but Co-op had nothing good and popping back, Texaco had just closed which sucked, so i decided to not bother in the end.
I came back, house shocked I took so long and the BBQ was ending and since it was chill up there we all went up to naths room, hayley was drunk crying, so I cuddled her, gave her back tickles and she felt better, I was semi and last time i did this was costing me £220. Part of me felt like i was being a cheating guy but it wasn't too bad, she liked it, it made me realise that Gracie was right, jake said that she was saying that since i paid for the date etc, which can be true but if i was shit then hayley would not of liked it. I did offer her a back Massage but she wasn't up for it but she was tempted to battle.
Nath had Sammy sitting on lap while his pc Blasting Music (yes i did get some Hotline Miami 2 stuff played) and he was playing Dragonball Xenoverse, Was too intense game, even for him, it had a PS home (RIP by the way) feel to it. Then it was Rochelle who left but Jake did shortly after. We also talked about not talking to girlfriends everyday was a good thing, which from what i've seen from other relationships is that actually that happens. Also pete showed me this bbw thats local and i followed her on instagram, stacy something but she looks good.

Swaggy offered a drink to hayley then to me which was nice and diluted, and i was thirsty as f. But this was after the fact i fed her rolo chocolate, which holy fuck it was amazing, she was into it and I GOT IT FIRST POV, which is something i've wanted to do with it for a while. I mean i was excited, more excited since it there was movement between us, like leaning and not just sitting down.

That got intense and it was even better when Hayley let me rub and jiggle her belly, at first there were abs but when she sat down, there was a adorable roll and i felt it and it was really nice and i just played with that for 15 minutes and she was relaxed and just casually chatting, Nath saw my D rise and then we nearly stopped but it was nearing 11:30 and Hayley walked me out, we hugged and gave her some nice cute advice. Then i made my way home.


I tried to run up the hill, but my legs were just going to walk, seriously. I popped in the dog n duck and it was too crowded and thought "nah its not worth it", I went to cafe sole instead and had a nice glass of water, it felt weird since the glass was hot since it had just been washed, it was a quick refresher anyway. Then i went for a piss and walked to the bus stop, the wind picked up and then the bus arrived slightly late by 1 minute and then i was starting to feel the sleepiness, which was a shame but hey, i've had a long day. By 12:30 or so, i was back in tavi and a normal run but walk home was the way to end this nice night.

To be honest, i got home and had to drink a pint of juice and then i was meant to upload thise before sleeping but i kind of crashed out. But it was a fun night. There will be some more blogs and vlogs coming up but for now, i can enjoy the sun and things. Especially since this is the same time, 2 years ago where i had my first Buffet in Sizzall, to be honest, i've not been since 2013 and that was with Charley and Amber.

Labels: 2015, april, BBQ, blog, Burgers, co op, drinks, feedee, feeder, fun, girls, guys, morrisons, omracer, plymouth, Sunny, texaco
Newer Post Older Post Home
Also check out some reviews here
Also something about getting data, texts and phone minutes for nearly nothing (only if you OD on mobile data) and don't mind using the 3 Network is worth a click of FreedomPop