A Different Feel to a 2015 Chirstmas

Well, its this time upon us, with Christmas finally here and the Presents bought and the wrapping and Haul done the night before, its also a wonder what can happen for another year of Christmas Festivities, from Feabie Christmas wishes, to last minute hard drive cloning issues and failing raffles. This year has a different feel to it. Lets begin:

A Festive Long joy of the Eve of Christmas.

Well this was a pretty ok day. Waking up at the 6:40 mark but then sleeping until a 7:40 alarm went off, snapchats to seek and internet to browse and a local beautiful lady i've seen on feabie that lives in plymouth and who is a stunning 365lb 18 year old and hopefully be with if luck proceeds me well to dream about dates over. Eventually i had to get up at 8:40 and cleaning and posting that i had now eaten ALL the Chocolate dates on my advent calender on snapchat before running to work about 8:55 to 9:05, there was a weird battery and time issues with my Vidonn, but hey its not perfect.

Then i noticed the place was open and just some raffle tickets my work is doing and drawing later today was to be done then it was q busy but quiet day of selling, with even a cute customer with his boyfriend being conecepted to buy a Roku Streaming Stick so they can have "Netflix and Chill" to have a baby (maybe it was a flirting tool), they giggled but didn't work. That and finding out i have to be at a customer's house for HDD cloning issues (SSD setups go odd). But that was also nice to be in a Xmas Reindeer jumper (the one used for the Christmas shopping vlog) and antlers which some people did compliment.

But also i did bring down another of the Viddon's i've bought since selling one might be a good idea, tempting people but hopefully it sells during the "new year, new slimmer harder me" period of January. But time was passing and starting to type this about 1:15 to give a head start of  the festivities on blogpost. Selling and talking to customers with this enthusiasm which recently i've had none is nice but when that happens, things turn sour afterwards.Time was passing and eventually it was time to announce the raffle ticket winners, since its not to do with me personally, you won't need to know them. But we might of managed to call the winners since £0.44 was left on VoIP credit.

But then soon the end of the day was happening and with life as usual, it was home visit time. Which although I missed the International Space station  passing over Devon and Cornwall, its worth it to make the effort for a loyal customer. And by loyal it was holy fuck I ended up coming home about 10:30 which my mum and sister were unhappy about it. Fucking RAM and SATA. But they did give me some Salmon Crackers which was lovely.

But then it was a pre-christmas meal  which was actually just leftovers and also some wrapping and a christmas present haul video to finally do, with it finally being wrapped showing all of the presents i've bought for family as well as a Poundland Shop i did on Tuesday which came to £19 including delivery.


Then it was time to rest until this Christmas began, from good films I have heard of and also Family to be around and the spirit of company. Also i did weigh myself which was actually a gain of 10lbs since I last weighed. Being 179 is not too bad, i'll end up 190 by the end of this festive period though, but we might weigh in after boxing day.

A Christmas of Damp and warmth

With getting that video up, I ended up sleeping at 3:30 which its quite energy draining, But the alarm went off at a nice time and after a fap and finding out shit weather, I got up and it was nice to get the onesie on and a Santa hat, but i was whining about not being able to do the tradition of my onesie video. But time was passing and the presents were moved into the Lounge, there was shit on TV and also there were debates about paying for skype premium to bond with Australasian mums relations. 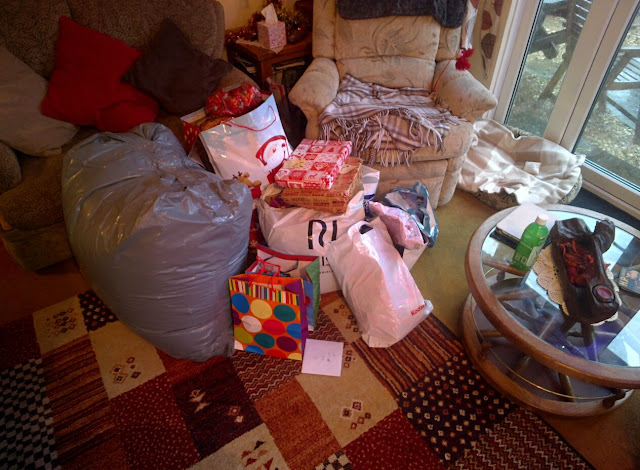 Present to give and be given

It was time to open the presents at 10:47. Well some of them at least, since my sister's boyfriend was joining us for Christmas Dinner. There was a range of presents for everyone, like beanbags, Lights, shower gel and not as much food related gifts which is a change this year. But i got quite nice stuff such as:


The stuffing of casual Christmas Dinners and a muddy Merry Christmas

After having the presents handed out, it was time to get the main mini tradition i've built up to over the years, A merry christmas wish to all wearing a onesie, which conveniently, i managed to do by walking rosie. Due to the shit weather, it was hard to walk to the usual spot wearing the onesie and Rosie biting my foot or pulling my lead, there were some near misses, Then i got the vlog done which was really good and summing up how the day is and how I feel.

Now then as i was walking back, I SLIPPED and fell on my ass, Rosie was pulling which is not the nicest of things but hey, thats how things can go. I got back and had a mini shower then until 1pm. I ended up video editing for that and by that time, it was time to eat.


The food looked amazing and I did fill myself up after 2 plates, sure i don't eat in one go as much as i used to, but wile watching Mission Impossible: Rouge Nation and enjoying the 3 bird roast and Gammon along with Red Cabbage, Parsnips, Mint Sauce, Bread sauce and Brussel Spouts as well as the legandary pigs in blankets.

Eating that was nice and the 2nd plateful was my sister's leftovers, which while uploading the video, was plenty of time to get eating. Stuffing balls is amazing too. But soon we all finished and it was time to get going and the 2nd half of Presents it was to be.


The gesture of Giving and been given part 2.

Now I was typing part of this up and then it was time to carry on with the presents to be given, there was a mixture of them which made it hard  to know for today and for other family half tomorrow, but I gave all of my presents to the family today which was nice and they liked it and I got some jeans and other members got earphones and shirts and even beauty sets. Which made it nice, the Dog and the cat were still being funny and playful but its their nature :).

The relaxed end to a busy day


Now it was time to relax until 3pm for the queen speech which was quite christian focused and more in all honest Kingdom Hearts related with light and darkness. The choir is good even though we were taking jokes about how some of them stand and also it was quite short which gave a "is that it feel".

Soon it was time for some entertainment, and by that i mean Everybody's Golf for PS Move, £3.99 which made sense since it expires today. More time to play golf with a good treat. But before that was some time with Brave which was a good film and then some concerts until my parents went for a walk and it was time for me, my sister and her boyfriend to play Everybody's Golf World Tour. The game was actually quite tricky to calibrate with move but it was very accurate and more like a different style compared to wii sports.

Then by the time my parents got back, both my sister and boyfriend had to leave for his family dinner and then it was just me and my parents to spend the night, we started to have a bit of leftovers for dinner while watching a Doctor Who episode ending I don't understand nor did many others. It was a mix of meat, onion rings, Sauces and potatoes. it was a nice filling end to the main food this day.

Then after this and a bit of music to rave to, it was time to relax and then we all watched films until the night was ending which was about the 11:40 mark. Which some of the films were odd with plot points and the other was just brutal and some a bit of both. Which by then i did have some messages about specking out a friend a pc for him to game and do graphics editing on, aria really do good deals.

And that was that, another christmas all done, all finished and even though there was a varied range of presents and due to illness, i didn't see the family we usually see but it was ok, they felt it was better for us which was a shame i felt but meh. Also I only saw one engagement on my social media which was Emma Grey but thats the only one i saw luckily.

For me its another day of it with another side of the family tomorrow, Until then, enjoy food comas and sleep.