With the Thursday before my Monday working finale. it was a nice surprise of how the family had a day off. including myself, luckily. I got money ready to buy a ps4 for my parents to give to me (gift of gifting without the hassle of them paying). No vlog for this. I was knackered from last night, carrying the poundland order of 13kg up 2 hills, that 1 hour and 20 minutes and carry a box and carry it back.


Also i got up at 9:40 this morning after a fap over a recent tinder match.  I was a late sleep due to getting the end of year blogpost up. I'm onto February now. Then i got up to check emails and have a shower, reading trump and the time person of the year. Eventually the shower with chocolate shower gel and that head and shoulders worked. My sister arrived and we caught up and chatted. i decided to get the gift card out.

Then it was the car conversation while dad was driving in fog films, memories and others. The queues were busy and we ended up going almost the way I run to the house for BBQs which is a nice detour. By 11:38, we got into the car park, we walked to the market. Then we all split up to walk around.


I headed to the oritental supermarket for a look,  but computerbase finally moved into the new store, it was So big and so much stuff now too, a guy wanted a GTX 1050 and the price was £150, £20 more than i paid :). Then i walked my way up and it was to the sony centre, I asked about ps4 anniversary controllers, they cost £300 nowadays  the console is £3,000. lol. I walked out of there and my my way through the usual shops, thinking of what to get, as an extra to sister's birthday and it was tricky. Then i walked into the game and saw the uncharted remasters separately for £15.99 or £19.99 used, nah, its better to get the old version of the collection.


Then it was up to Virgin Media Store and a chat to  a cute but petite blonde rep about cheap monthly plans and they ended up saying 3 or go to customer services to get a deal due to virgin money card. that was no luck.Then it was drake circus for ideas and went into places like HMV for dvd and others but it wasn't that right one. But then it was time to head back to the main town, walking in maplin and fire tv sticks for £34.99.

Then it was walking in the gap near TJ Hughes and exploring poundland, the queues were long and no deals. Then it was to cash converters with nothing ideal and nearby it was a white PS4 for £0.05 less than what i'm paying for mine. Walking up to the sundial again.
Then i walked my way back up, with Debanhams, being my next stop with different men items and some other deals. Then it was Mossbros, which i felt like a peasant, but the lady asked me if i needed anything, i said i was ok and walked around.


Then i popped in to warren James, I browsed, another blonde served me to check if i wanted anything, i said i was good . I think Nicole saw me and stared at me while getting something. theb i headed into drakes circus. When i was in there, i walked to M&s and got a bit of exploration done. But it was soon 2pm and i met dad.


We both walked to new look where overpriced usb hubs and clothes were around, but my mum saw and had a lovely jacket fitted on her but she was not sure if she wanted to be able to use if more than just the christmas party. But then it was up to the food court that we decided to have lunch. Mum and sister went to spud u like and me and dad went to burger king. There was some cute bbws there, I saw this lovely round blonde who had cute vbo and jiggled as she was walking, but me and dad got the guy next to her. But we both ordered large king meals. He had the Texas rib and I had the king. Both were the same price and it was £8.68 in total, which is under a £5 for a large meal :). 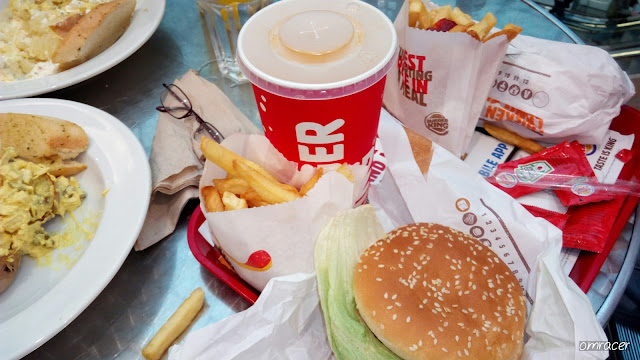 I then ate it and it was lush, the bread had a good taste to it, the sauce was the same as Big mac sauce. That was eaten nicely. After chatting and planning, we then walked around cath kidson and then I went into lush. Which i was then stuck with this lovely rep who was really nice and guided me . She thought it was for a girl, which she digged and I explained it might be for my mum or dad and she advised me on ideas for who it was. She suggested secret garden or Noel or something else. which I explained I might be getting it next week. But mum called so I was having to leave and meet them, which we then explored hmv and mu was going to buy 2 dvds for £20 on that offer.  Then we made our way back to the car in the rain, with £4 paid in the car park. An argument with mum on my cut jeans and how it's my fault if i trip up when running places was happening.

The we made our way to Endsleigh garden centre, with the usual christmas charm and maybe 2 items in Christmas present ideas. We made it in the fog. and then it was time to explore.

Wandering around a quieter garden centre was ok, sure some deals and items to think about but it was also some moments where I reflected or wasn't myself. But soon i decided to dive in and buy some balls for #dogwalkingwithomracer. Costing £4.99 each, they were strong when the sales rep showed me them. They were bought.


Then it was wandering around and finding the family who ended up looking at bird tables bit bottled that decision dive former Cornish teachers were hard to buy for. Then it was getting a bonsai tree with a sales rep giving plain solid advice and we went for the classic look without any hassle. But then it was time to buy some gloves for my dad. 2 pairs and they came to £14.48 so I bought these on my prepaid card. Then it was time to go.

Then it was time to head home with major traffic rush and also it was the RTA on yelverton a clip on one car and the other side was pretty dire, it was almost in the middle but it was a nasty one and especially with late night shopping, queues were high. But we finally got back about 6pm ish. With my sister getting out and Rosie having a quick walk, things were ok.
Soon it will be the proper Santa shop and I can't wait to see that happen.

omracer
Labels: 2016, blog, Christmas, december, drake's circus, drink, Endsleigh, food, Garden Centre, omracer, plymouth, presents, shopping, Wyvale
Newer Post Older Post Home
Also check out some reviews here
Also something about getting data, texts and phone minutes for nearly nothing (only if you OD on mobile data) and don't mind using the 3 Network is worth a click of FreedomPop