A Cornish Hot Day Out

With his amazing hat that's been happening, I decided to finally take that day out I was wanting to get done. After a chillaxing day  in the sun and shade in the hottest day of the year the day before, it told me that the best way was a day out to Cornwall. You can see the vlog below:


Ok, after shaving and fapping that night before, I had my eyes awake me at 6:25 which was 5 minutes before the 6:30 alarm. Eventually that alarm woke me up and I wax out of bed and getting prepared. Glass was on charge but has a problem of saying it's actual percentage to then saying 0% in a amount of time. I noticed that in the other recent blog of going to cadover.

After teeth cleaning, vitamin drinking and changing into shorts, I was running to the bus from 6:55 onwards, I got there by 7:07 and luckily with my old knowledge of school Buses, I was not late nor missed it. I got on when it did arrive by 7:15 and paid the £5.50 return in cash (my wallet was now empty from this) and went up top, I sat behind a friend but I don't think he saw me until later on, we chatted but the views were lovely to say the least.


I gotten off the same stop as my friend then we chatted until he went past the sundial and then I went to start the vlog before going to the toilet in drakes circus. Then I started to .and my way to the hoe with he most amazing heat and wind along with a blue sea and sea air.


But soon if was 8:50 and i was off to poundland to get breakfast and maybe glue to get glass fixed, this crack is worrying me so I want to try to fix it on the way there, since at Ives is 2 hours 35 mins approximately​. I got some uhu glue and 2 drinks and a sandwich along with a bag for £3.05. Poundland had no queues at that time of the morning luckily.

Then I rushed off to the station, the heat was stronger, the wind was off and my sweat was raining in me. But I got to tthe station by 9:12 and ordered the ticket and was ready to wait for the train by 9:15. The rep was nice and the cost was £10.40 to get to St Ives for a off peak return.


Then a quick toilet break was next but I'm glad I didn't take my laptop when I saw the train arrive, it was only a 2 coach which was nearly packed, a fair few got off and I managed to get in, sure thee was no table so eating was not ideal but I'm a creative guy. Then the train was off and our journey started. I manage to glue glass and uhu did fix it and the battery didn't say 0 when I tried it after a quick plugin and turn on. The conductor was checking tickets by St Germans.


Then it was near Liskard and things got busy, the train was starting to really get packed and by Lostwithiel, a chap was sitting next  to me and people were standing waiting for room.


But I tried that sandwich and it was nice, you could really taste the chicken and bacon in the mayo mash, no butter was a bonus and drinking the Aloe Vera made it nice too.
Then it was getting past Truro and people were getting off, not many people got off at par , with me thinking they might to get to Newquay, but nope. It was a bit less crowded as we were passing to Redruth and on to Hayle, which after that would be my next stop.

Just as the train arrives to St erth, the St Ives train was revving and started to head out. The drivers were looking at the train but sadly the policy is no waiting, which essentially meant a 30 minute wait. The amount of people getting off was a fair whack.

So with a wait to happen, I decided to get to the toilet, now St Erth is undergoing renovations which means the toilets are actually in a portable cabin along with the ticket office. Which queues for ladies to go toilets but no queue for the guys. Then I walked to the tearooms and looked at the railway posters and gifts on offer, something similar to what work has some of, but by 11:45 the train was arriving.

It was a bigger train this time and I got on and manage to get a good view of carbis bay as the train was passing but it was 12:10 and I was finally in st Ives.


The exploring of St Ives


As I and everyone got off, the pathway was packed, so I decided to walk a different path which had so much nicer views and I mean really nice.

Then I walked in further, passing in fit shops, gift shops and even a shop about chocolate pie, it was mesmerising on how nice the streets are with mixes of top brands and also locals and even a wetherspoons was heere too. I saw skimboards which I wish I could try but I don't have the right clothes for that on me either. I tasted some  chocolate pies which are basically strong chocolate with other flavours mixex in, I tried popcorn. And chilli myself, I might buy some for home.

Then I was looking for Phillips, one of the best pasty shops in Cornwall I've ever. Renew too, and with finding them, I noticed the hockey. Flavour was not there :(, so I went for a standard steak for a whopping £3.15.


A walk to lunch


As I went around the harbour go the north of st Ives, with dogs in the sea, kinis of all sizes, cars in lanes, it felt like a nice tourist day and I walked on to another beach then around that to a nice spot to eat lunch.

It was a nice pasty, only one big chunk of steak in there and the drink helped, ants were in my way and some got slapped to death but it was a slight chill and waves were picking up by 1:40, which by around then, I decided to head to the beach to dip my feet in the Atlantic ocean.


I headed out to the beach, it was nice and the water obviously was cold at first, with my feet bare and holding my socks and shoes, it was nice to set them free. Some waves were pretty sronrg, others were meh others were small but fast. It was still refreshing to say the least. Then I walked my way to the other end of the beach. With my feet in the sand and a heat while the wind was strong in some parts. But it was then the hard part. 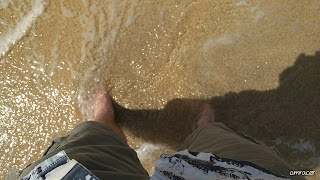 It wax a struggle to get my feet dry for the socks to be put back on. I eventually got on some tall rock and got it done, then I looked at the café and walked to the tate.


As I got to the tate, I walked up to it, then looked to see the entrance costs and was a no thank you vibe to it, so I carried on the backstreets to get back to the harbour.


To get in to the relaxing chill mood to kill a bit of time, which I spent £1.80 in total. £1.5 on fruit machines, but won £2 from that, £0.80 on coin pushers and then I left with one pound, so it was nice to enjoy Pacman ball again. With a old lady in a wheelchair winning on coin pushers, a new version of space invaders and no more point blank :(.
Then I looked in some shops, like one shop had micro usb fans and I tried it in the Redmi 4 and it turned the phone off, I'm like and the serving rep was confused as well.

Then I walked into salrock and saw £5 t shirts and trousers for £12.50, but I didn't go for then since I didn't need shirts.  But then I went to get some chocolate pies, I went for the three flavours popcorn, chilli and peppermint, that was a nice fiver spent.

The fun bit of looking.


I wax thirsty so I went to look for a slushie for £1, since a shop in Tavi has them for that but I had no luck when wandering around the streets. So I might have an idea to make my way back to the beach and see if I can get a slushie from the shops there, it was no luck but  I saw lovely views.

Then I went to the toilets and here is where my mistakes always happen, I hung glass up on the doorway but I put the bag of chocolate on the floor while going for a oee and washing my face to cool the sweat down, then I walked out forgetting the bag on the floor, which as I walked up to the station which was getting packed, it was not in my mind, after buying a £0.70 apple juice, I only found out as the train arrived, I regretted not getting it but getting home with no delay is more important , so I have to go without it

The journey back Plymouth


Now I got on and this was a packed train, I sat down luckily. The views were really lovely.


Once it had passed Lelant Saltings, the train was cleared out pretty much. Which then we arrived back to St Erth, which then it was another short wait to get this train back to get back home.
The another 2 coach train arrived and this was getting packed, I had to stand until redruth which some chaps got off, the conductor was quite cheery but struggled to get a refund for a mistake sold ticket for someone else, but she was ok with mine. Then it was nice views of the other side while end of work commutes were getting their way home.


It was passing Liskard and things really started to speed up, passing g route 38 by 6:23 and it was only 15 minutes until I had to be waiting for that bus, it arrives at 6:45 and then a nice bus ride back before the major effort of getting this up. It was lucky on the train skipping devonport which made it at a good time.

I managed to get off the train at 6:43 and ran back to the bus stop, I made it on time. The bus was late so I was not in a panic.


I waited and felt sweaty but after a few citybus passed by, I got on the same double-decker as the one I got on when starting and a smooth journey was the plan, a nicer breeze swept by and I was lower down this time. By Crownhill it was a mishap with a mobility scooter getting off the bus when she forgot to press the button, but that was done and passing the roadworks was sure to be easy and off back home.

By 7:30 I was finally at lidl and about to run home. But i checked in there to see if i could get a £0.30 drink, sadly there was no luck, which means I could finally get home and there was a bath in the works, showed parents the pics and pretty much crashed out at 2am with getting the video halfway made.

For a day out that isn't too bad. And I might do another one in August if things are free which might be the case. But for now, let's relax and work in this heatwave which might be for he rest of the week.