Well, this part of the holiday is now over, with the silvers tine event sorted, everything packed up and the antics to travel to the next airbnb, it was time this was going to be the Top Weekend ., then vlog Is below.


Well it was another 5am wakeup, but I forced myself to sleep until 6:20 until I actually got up then. I then starred to upload the vlog from yesterday. Since it actually is more stable on Youtube then it is uploading trailers to twitter. I then got showered and packing done. Then it was a pineapple gfuel ting, with cold water from the bathroom. Downed a bit of it.

I said hi and part goodbyes to the host and enjoyed the puppy one last time. Then it was the airbnb book to fill in before the final pack and the plug to find which was the bottom of the suitcase. But then I started to run back to Buckingham.

The run in the sun.


This was the knackering run, but now I had that shortcuts, I thought it would of made it easier for me, but I pelted,  with the sunglasses from trust from yesterday came in handy, even with sweat.


It was a 38 minute run, the shoes were the ones I used from the half marathon which was a year ago today. Bug they handles welled minus nearly tripping up a few times. Passing alpaca farms and also therapy centres, I made it to Buckingham 3 minutes before the coach to Milton Keynes was to arrive :).

The coach of calls


In the way back to Milton keynes, I check my voicemails with both milbiel and yay and it worjws a treat and called a few reps from the event yesterday. Which got some titles in and time to order as well as a secret order. Another £6.00 ticket 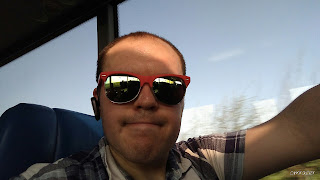 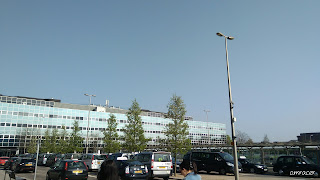 
Oh fuck, here we go, I get in to the station after unloading from the coach, then just as I get to the platform a train was about to leave, I pelted to it to platform 2, then it left, then repeated for another platform and it lefts then I walked my way to the shops outside and it was expensive, except the little shop nearby that had drinks for a quid but then it was 10:07 and I missed it. FUCK. So it was the. Having to wait around for the train at 10:47 which ended up going at 10:52. But there was a can of Rubicon for £1 which was ok.

I then called nan and also typed this up before getting in the train. This was OK and busy at the same time, luggage was full and eventually a lady with a dell sat on a chair with a rabble next to what seemed to be a journalist, so I got a seat row to myself and finished typing this up before getting to the station by 11:25. Also a girl smiled at me and she along with the guys in the seat in front of me, about one friend that gets a call if the queen dies, no if or buts, if that phone rings, the queen is dead.


That and the airbnv now said that 7pm is the check-in time so it was 7 hours to kill in London as well. Ooops, so I now has a chance to explore some places, but first to get to the lockers at Waterloo. I hope they ain't expensive.


The run in London


Oh yes, this was hetic, now what was happening here was that I found our the lockers at Waterloo would be £12.50 for the pwrious I needed, um fuck that. So a big of googling showed me a shop using Citylocker, this was £6.00 for 24 hours. So I decided to RUN to that shop near Lambeth north, of this was not the best idea. Like I ran on roads, bumped into people, ran through a protest, took pics every bow and theb. But after taking a few wrong turns I managed to get there in 42 minutes. It was not too hard to find once I was on the right road.


Exploring in a heatwave


The first reward was for me to have a slushie, like that would work and I was near a namco funscape, which exactly had what I wanted, after exploring it and the way there, with berry fanta as well.  when I got in and eventually explored It came to £2.50 for a paw cup, which was a 568 ml bottle. That was just sensational and £1 refills actually made it cheaper than others.


Then after that refill, I walked out and slurped it when browsing the London eye, the food underbelly festival and then wandered my way to convent garden, which after chats on smoothies and a guy not really having a phone case for the Redmi 4, things turned sour as I browsed..


The phone slipped out of the xaee and cracked the 2.5d gorrilla glass, oh fuxk, I was lucky it didn't damage anything major but that's typical luck, so after finding a toilet which I didn't go in since its £1.00 entry. I walked my way to oxford street and oxford circus.

Now this was good, sure there was topshop and also a phone shop, so I managed to find a £10.00 case and the chap designed a new 3.5mm jack in the case which solves the reason I ended up making the phone crack.


The I managed to find american candy stores, with kool aid for £0.99, fanta berry for £1.99 and other snacks, it tempted me but spending £21.5 so far in London is a bit much really. So I walked out,


I then made my way to Hyde park to rest my feet. It was a long walk, but worth it to rest my feet, even with seeing security hassling a guy and the dog was warning him away which is a safe move. But I for to Hyde park about 3:45 and then rested for an hour, even with 420 and a hashman of some sorts, Glass had died by this point and I didn't want to wire a powerbank to myself


By about 4:35pm, I started to make my way to somewhere else popular that I missed out on. The place with all of those screens. But since it was 420, OMFG that park was lit with pot and also raving, like even with police around, nothing could easily stop this hype, I meant it was hot, exciting, different artists were there and also it really showed the appreciation for weed. But then we walked on to the famous locations, well the Palace, which was packed and also TV crews were really building up, but it was the same soon enough...


I walked my way via Pall Mall, cops were everywhere, cars with "HM protection" were on, I then walked on and went up to Piccadilly circus, but the Tesco there was MANIC, so I walked in and glad i didn't buy. But then it was the sights of the places that really do show off what London is about.


A theatrical run back to the luggage

This was amazing how many shows were on in different places, like I don't have time to see them sure, but if i did, i would have to explore one or 2. They looked ideal to spend and evening, but instead it was nearing 6pm so I had to make my way back to the luggage shop, which that was a few minutes, with achy feet, with more crowds, drinkers EVERYWHERE, the sun does not stop this city AT ALL. But within a while, I made it so far


Although a shop I will be looking at more, this chap outside goes to me and "mat if i give you a £10, can you get me bulmersred, I swore at the till guy and he's banned me", I was reluctant at first but now, I got it down and he got the change and walked away after a handshake.

Then it was getting all knots of directions with Google maps (most of the day really) but it sent me round back roads, I managed to get there, the chap forgot to give me the tag which he asked for, but he knew it was me. I then got it back and it was to the Airbnb.

Another find of the maps of Google, I kept passing where I was meant to go, I passed into a quick shop and the chap was "please don't bring your bag back in with you", which means I can shout at him if i leave it outside and goes missing when i come out, I didn't say it but very close to. Then some guys laughed as I shouted "fuck I got the wrong direction". But then I got to it, it looked like a old business hub or even like a kids care home, but ringing the call button didn't work, I whatsapped the host and then i watched her, she walked out, a big cutie indeed, jean bulge, round face and lovely to chat to. She showed me the room and the shower, toilet, kitchen, it was far apart and it was nice that she gave me a towel as well. Bless her, front key and all. She asked how long i was for and I told her the plans. She giggled and smiled. Then she left me to it. 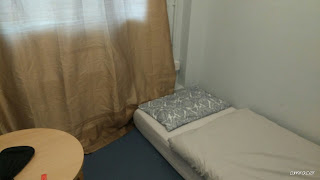 A rush for Fanta Elderflower

Now that shop I had to buy the Bulmers Red from, That also had a 1.75L bottle of Fanta Elderflower, most people have no idea its that and its "Blue Fanta" since it has a foreign name on but I got one and will probably get another for mum on the way back, gifting shopping etc tomorrow. But then it was also tesco which had a deal on for not 1, but 4 bottles of Apple and Raspberry Water for £1.50, which that is a steal in London, so I bought it and ran back to the Airbnb. Passing this, was also a 24/7 food van with slush for £1.50 or £2.00 for a large. Tempting tomorrow that might be.

And that is is, the day is done and getting it up will be the push but tomorrow will probably be a quiet blitz of it at one point. But for now, hot dreams

Labels: #ukheatwave, 2018, airbnb, april, blog, case, crack, Delay, drinks, london, Luggage, omracer, phone, run, slushie, train, vlog
Newer Post Older Post Home
Also check out some reviews here
Also something about getting data, texts and phone minutes for nearly nothing (only if you OD on mobile data) and don't mind using the 3 Network is worth a click of FreedomPop