well, this was a surprise that I really wanted to have happened and hopefully, it was one of the big moments of this year, it certainly feels like it. but it is indeed a date, one that got planned actually right after the blog post last week, of course, I'm nervous, who wouldn't be but she was the one that offered. There might be a vlog but then again, this is one important moment and typing is better than videos in one way, but you might see soon


well a lovely girl I saw joined feabie, she was a grey face originally and she message me and we chatted, while that was happening  she did upload pic and it looked real as far axe I was concerned, but she was an ex feedee since her ex was a feeder and also down here doing nursing in uni of plym, but we did talk and she was surprised I've never had s girlfriend and never had sex even after I told her about Gracie, but she was keen to impress me in a way.

But we did talk about work and the shop since that's important too and though £18k loss this tax year, it was still nice she seemed interested and then she said about meeting THIS weekend, which was what I call progress, so I happily agreed and she liked going to the burger bar I wanted to try out, by the uni. so we got that arranged for 1pm, which that is what I wanted so badly.

but then she wanted a Uber voucher in exchange for a selfie, just so I can see her face, which actually when chatting she wanted to see my penis, so we exchanged pics. she was beautiful, slightly double chin, blonde hair, normal lips, cute nails and she did show boobs but not my thing haha.

but then I sent her a Uber voucher next day and talked about KFC, but she also offers that we could go for back shopping then go to hers for feeding if I'd like to which I did say yes for that. so that was something BIG to look forward too.

then I didn't hear from her again, she has my number so it's not like I'm relying on her via feabie, but a worrying streak according to fewhale (nickname for an amazing girl I chat to on snap, that's another story) I need a girl best friend and she will stand me up.
so my mind wax aflutter.


new times happened and another girl call Lucy added Me in FB and then messaged me saying her ex stole money off her and wanted me to take her food shopping and would let me feed her, so that gave off a Nasty Matt O Kane vibe, so I was reluctant to do anything and removed her, but she did apologise the next day and chatted and she was keen to get fat and really wanted to meet me, but I said I was going on  date but did say we could if I get stood up, since that anxiety of if things happen is painful, so she was trying to want me to just meet her instead, bit said I'll let her know, it's harsh but at the end of the day, wanting money quickly is scammy. that and okay I did get her food from Atlantic fryers for the burger, 2 chips, drink and delivery, so it ain't a major loss. but that's that.

I wake up with Spotify blasting some jpop on home mini then I forgot a muted the mic, so shouted at Google to turn then Aland off, then checked snap and S was going to sleep since she finished her night shift and wished me luck, actually Katie, Molly, Leah,, and Zita did to be fair too.

but I checked feabie ABC then fapped then got up and that was 9:10 and checked desktop and to see a Scottish KH3 stream and realized UPS never delivered works copies of KH3 on Saturday since my rep said that an "unexpected task" in the warehouse meant it could not be shipped on Thursday and she asked for me to say if I was open on Saturday, which I was .

but then family got up and then we chatted and then I got change go #dogwaalmigwitnkrmscer and the HAIL was immense, the amount of it was so scary actually  but it was not settling from what I saw, the winds were flowing and that was 18 minutes before got home then had a shower and change into a nice cut jeans backstops outfit, that shirt had really gotten loose in me too, but by 10:45 I had started running to the bus.

I got there by 10:55 and chatted with a customer who already is a nice chap and he'll pop in to see me soon about something,  it then it was a 10-minute wait for a £5.80 day rider plus.

I got on and the sun was shining, I was typing and messaged her on that I was on the bus to plym now. the journey was quiet and I was passing mutely by 11:55, wet roads were slightly starting to dry. but I got off the bus by 12:10.


an hour to less to explore, the thing, so there's, wasn't much around, I first got to the coach station and saw falcon prices which were not too bad but actually more expensive for z pre-booked London return.

but some good deals in Poundland like microwave popcorn for £1 and then I went to menkind looking for bongs to funnel one girl maybe but we'll that's not there but there were Lots of retro stuff on offer which looks good. Belong Game had nothing much minus some Elgato stuff and maybe tested some mech keyboard as well as others. Then it was CEX which had some bargains in but then it was more cute stuff in the other Poundland like earphones. also, the screen has gone, some good memories there.


but then I was in the oriental supermarket some good food and possible reviews to try out, but then it was heading back up to Drake's circus.

The date to wait


so, it was 12:50 and I was heading my way there, nerves up, needing a pre ab got my way to the toilets to refresh myself. the phone was in charge in the box while I did it and 1pm passed, so it was time to walk around Drake's circus. I messaged her to say I was there but heard no reply.

I then went to the Apple store and got told about the pros with quad-core i5 for £1548 but still too pricey for me. so I walked down to the comfy chairs at Waterstones to have a check and wait and see. but by 1:40 nothing was happening so I decided to text lucy about meeting and heard NO word from her at all. so it was time to explore and do some shopping.


I walked into town again to get bits I saw and wanted, though hoping for a reply,  I went to menkind to buy the GPS cable first, £4.97 for a cable with GPS on it. maybe an omracer reviews soon.
then I went to BrandMax and saw some things, like jeans for £14 ( bit posh) a shirt that was £34.99 but reduced to £6.99 and then £9 for 5 2XL boxers which are a perfect size to fap in. so that was £30 for 3 things, paid that in Card. Then I went to Poundland and got the popcorn, rice, pot noodles, a 4 pack of instant noodles and that was it for £5.00.
then I made my way back to the bus. 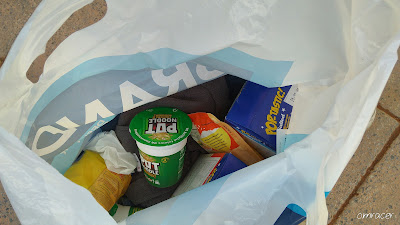 as I did that, I got messages from both ladies, one said since I planned the other day, she didn't both to let me know since she felt disrespected and Lucy pretty much "forgot" since she was having a roast at her mum's and the phone was in charge. so basically both girls stood me up, oh great, but how the fuck was I supposed to predict one girl would just message me out of the blue and wanted to meet me on the same day which is the only day i had off  for the (else i would have to cancel my work customers to have a girl possibly pick me up) date which was booked with another girl a week before.

Another time of wasting and back to the same, maybe I have dug in too deep, but I walked to the bus stop and the bus was there, so a wait, chat with a working neighbour and then got on the bus and on my way home, so basically a wasted day


I got on the bus home and typed this up, my hands were cold, my heart and body were feeling pulsing and sinking, this hurts. but hey, how else can I plan dates now since this will probably just happen again with Somone else and life will repeat, maybe I should just travel up to have a weekend in London and meet Christea, Emma, and maybe spend time with chubby cupcake since I can't even try locally anymore it seems, I fed both girls so I'm not a fake feeder, actually 3 with another feeder that's local but that was actually a voucher for her she didn't use and forgot but it worked anyway so no money spent this week on her. I got home by 4:20.

But I got home and then my parents got me some shoes and I told them the shoes they got me for Christmas I've slipped twice when wearing in just a couple of weeks apart (the second time, 2 cars were coming on the road so nearly hit by a car) on and they did get annoyed and the dog farted in my room which didn't help, but no replies from either girl so I made a very tasty stuffing chicken noodle bowl.


Then it was a nice night of typing up accounts and also warming up and reflecting on the sadness of today,.

Hopefully, February is a better chance to get resolutions done.

Email ThisBlogThis!Share to TwitterShare to FacebookShare to Pinterest
Labels: 2019, brandmax, burger, bus, cold, date, dates, Feabie, food, girls, January, love, menkind, omracer, poundland, shopping, sunday, wind
Newer Post Older Post Home
Also check out some reviews here
Also something about getting data, texts and phone minutes for nearly nothing (only if you OD on mobile data) and don't mind using the 3 Network is worth a click of FreedomPop