A Vegan Stand Up Afternoon

Well, this was actually surprised events that can always happen after I finally got the feed done and dyed my hair blonde which actually was received well. But hopefully, things go well.  there might be a video below.

A Blonde to change

Well with finally getting a day to myself last week, I managed to finally dye my hair with the mix that I bought in boots. sure things were a real laugh and catch-up on Instagram but it was finally good to get it done.


Work has been hectic in the rain and sadly with the change of hair comes bad luck, well the bike I have, the left pedal flew right off , literally just as I got to brentor, which was great  sure my customer helped me out once I left but I was having to run to the bike shop and Tavi cycles luckily had a spare pedal spike for £10 Inc fitting, I offered £15 but he refused, like something you have to offer.

Work has been a bit o a shock with the compliments of my hair though, I mean things been busier, orders sorted and also the vibe of customers to deal and be shouted at by. But that and losing the 64GB transcend drive to the second customer is a shit storm but we deal with these things. Also, i tried to join this plus size group on this and had to send a verification pic and then posted this in the group then got removed.

Now the date came about as a comment reply on FB when a girl I've liked and gotten to know in small doses said that I should let the feedees online starve and also should feed me instead. which actually that sparked a chat then we chatted in Snapchat and actually legit arranged a date on North hill by 2pm.

this was exciting since she is my ideal size and she was also a passionate maccies lover which might finally get a new years resolution sorted. she sent me a recent pic and was 😍😍😍 an, okay maybe I repeated mistakes by doing Uber eats with her and she sent me a few pics of if and her eating and she was 😍😍😍 and thus made it exciting, she's not been feeling the best either so maybe this was all for nothing. Either way, we have to try.

okay sure I was worried and also excited I chatting with S and she's off to Cali in summer, well especially with the Brexit killing arguments policies are doing. I don't blame her and she's got me to sort out her max if we get chance to after this. oh and Rosie walking in the rain at midnight is fun too. Then I woke up with the Google Home alarm, stopped it and was chatting and then fapped. getting up at 9 was so good, and I was energetic for what hopefully was to come. so I got a regen prepared and checked emails and chatted to a feedee I get on with and she was impressed I might be feeding this date.

I and mum then walked Rosie around the field, we chatted and Rosie was enjoying ball in the warmth, sure the field is covered in mats and sealed off with a low green border and all. but then I got home and started preparing for changing and a shower and messaged her to check if it was still going. No response, which is fair so I had to guess it was going and still prepared.
Part of me had bad doubts and as I was nearing to leave and run to the bus at 11:40. I was feeling their nerves. but with the original LED shoes, grey jeans I cut and a grey hoodie, it was nice to be ready to go.
I ran down to the bus, sure I passed a customer on the way and chatted with plans on her paying me for inks next Friday. Then it was getting there and sine the app said 23 minutes, I browsed Lidl for 10 or so minutes.

Then I waited for the bus, like only 12 minutes to wait and hopefully wait for a response from her. but nope, then got on the bus just as parents said they were driving in, that's typical of them, it's that overprotective vibe again. anyway, I got on and paid £5.80 for the return and the journey was on.

So, I was on the bus, typing up, some guy was asking everyone how they were when I just kept quiet, messaged her to say I'm on the bus and carried on typing. but by Horrabridhe, it was a surprise laura popped in the bus, okay sure she didn't recognize me and also she was still looking the same sleek black I saw her in years ago, like 8 years and then kept typing. the guy that asked how everyone was started chatting to her, which I learned she's a single form that, but sometimes moving on is always the way and is not attracted to her anymore which is fair then time passed by, Derriford by 12:50 and soon the bus was nearing town by 1:15. Then I got off the bus.

well, things were looking scared, it was only 30 minutes after I went toilet at Drake's circus, but it was tense since no word was coming from her, which sadly that made this seem like a tale of two different girls with the same name and it was. My first places were the usual Poundland, cex, game. which funny enough I saw Pete and he sold his S8 and then we had a selfie together. 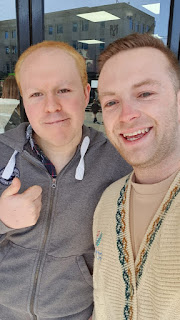 I met his girlfriend Steph as well, which she was lovely and shy, but we then parted ways as they were going to book holidays. I was waiting on the phone call or message. But my mind thought this was going to be another stand-up, and by 2 I was right since I did leave a voicemail via messenger. Okay it turns

My mind was looking for MicroSD cards with class 10 U3 for a change since it can affect vlogging, Carphone only had it for 34 quid on s Samsung and Office Outlet were even more money even with the 20% off. but I passed it. The food complex at Bretonside was doing nicely.

Then it was a wander down to the bottom of town, but passing Gregg's to see if they had a vegan sausage roll, which they did, that was to buy later, but also I noticed that a girl I flirt with on snap was apparently near me, I messaged her if she wants good, she snapped a pic of her boyfriends back so that was a nope.

Then it was browsing around the oriental shop and no luck with finding the burger sauce at all either. but was close to buying the seaweed there too. After that, I decided to walk up and check messenger and snap but no luck either, and the circle repeats, maybe offers were around but no luck. Soon after another voicemail left, I decided to go to Argos for the SD cards I was looking for, which for £24.99 they are not too shabby but then a customer called and had to nag at a visit to him and all.

Then I told S what was going on and she was fuming and apologised for this happening to me, okay sure she's blaming this for her just wanting a Uber voucher and ghosting but that isn't really her fault and more mine for thinking it helps make effort, but then I got to look at the Other messenger. Which actually was amazing, lovely design and maybe a twerkable there and solid metal too.

Then I walked my way to find the Vegan sausage roll and it was in the first Gregg's I went to originally so that was where I had to go After I messaged her one last time before I tried to find the Fanta grape before getting the bus home.

The search for grape and Bus Home

Then I decide to run up to the north hill spar to check, passing the meeting up point for this supposedly 5th date on the fountains, no Fanta grape in there. A run from there to Mutley and that was no help either. Sainsbury's was out, the premier was out and by the time I was at the bus stop, the bus was here 2 Min later. so I got on and if was a reflective way home for me. though I got back to Tavi by 5. I did then find a quiet place to eat the vegan sausage roll. God that was absolutely lovely, it tasted like

Then I got home and time to edit and everything else, now with an SSD too, I can't nag at speed. But there we have it, a sad afternoon but I kept my spirits up minus some tears by 3ish. But also when I catted to her the day after, it turns out she was a bit sleepy from a drug called pregabalin. But we still get on so maybe there's a second chance for us to meet, even if shes applied to be a curvage model. Maybe things might be better soon.

Labels: #vegansausageroll, 2019., 5th, blog, date, greggs, love, maccies, march, omracer, sausageroll, stood up, sun, vegan
Newer Post Older Post Home
Also check out some reviews here
Also something about getting data, texts and phone minutes for nearly nothing (only if you OD on mobile data) and don't mind using the 3 Network is worth a click of FreedomPop