well, this was an exciting time to see this amazing girl one last time before we finally part ways for a time. Especially after a relaxing day. The vlog is maybe below:


Let's be honest, I was just in the Airbnb and video editing until 3:20 and then I explored Greenwich but only briefly since that's the way home tomorrow. But then I got back at 4:20 and bought a sandwich and juice for tomorrow with me. I was close to going to maccies but I browsed and cancels an order.


There was a choice to use the river but £7.30 single is a rip-off. I did try some food out there though. But before all of that, she asked about the Greggs and thanked me and then we chatted about which Indian she wanted to go to., The one we planned actually was booked so it was to one near to her. Eventually, the time had passed the video was up and I was changed and running to Island Gardens station.

The travel and Kings to Cross and run.


So I got on the DLR. £15.30 on my account which is such a nice gesture from TfL. But I was on since it arrived as I was running down the steps. Then I called my grandad for a catch-up and text mum on WhatsApp. Same with her to say I'm on my way and she said she was delayed. So I got off at the bank and Ran to Kings cross in 20 minutes :).


The Tube Way there


She was excited, I was as well, though worried since a customer of mine always goes to London and back and I would end up going to his restaurant haha. But then I got on the tube and by 8pm, I was at Central Finchley. Also after the issue with the racism after the vlog, that had to change but now she was on her way so I met her in the car park for the station.

Hope it went well Mattie, did I see you on the tube yesterday evening? pic.twitter.com/jJ6v2TxxPO
— Jake Harris (@Jake__Harris) May 20, 2019

We chatted about various brings and things and it was nice to do it while she had some guy trouble of a family thing which it was good to understand but something I'm never good at understanding anyway. But we parked up an walked in, a van nearly ran her over. But we got there and it was empty, open but empty so the reservation was not needed. So we got to the Indian orchid nice and easy.

We had a nice corner seater and then settled down before chatting and planning what to order. She explained what panner is which was a square cheese that tastes like meat. but the was so much to choose. We both ordered eventually

It was still chatting to her about more thing such as my work, her work and we'll eventually it arrived. We taste and my mouth was knowing it was hot with the poppadoms at first, The sauce on the left caused that but it was very tasty to have it mixed in with the cool one.

She was shocked about me never having half of the food I've had until now when I've been away. But the way it was sounding, it was a different cuisine world out up that way and I under exaggerated what the spice would be like let alone the portion size. Since I usually pay £5 for the same back in the Ganges.

She was enjoying it and even spilt a bit of sauce on herself and I laughed a little bit, but then she went toilet and thought of wanting to have it boxed up, which the rep did lovely and actually knew her before coming here for the first time. she has a heart of gold that girl does.

It was amazing how she was getting full before me yet she's gone up a dress size and I joked about that's the next stage of feeding with new clothes to buy. she also said this is like my second date, the right in a way since some doubt escorts as an actual date and more a session and they meal with Lucie some will consider a meal or meetup. Eventually, we both couldn't handle ant more, well I wasn't full but the spice was strong indeed


But then it was nearing 9:30 and it was time to pay the bill and walk out with her, knowing this will be the last time maybe this year (hope not) that we will see each other. But she dropped me off for Totteridge and Whetstone and then drove off, she was tired more than anything but it meant a lot to the both of us. 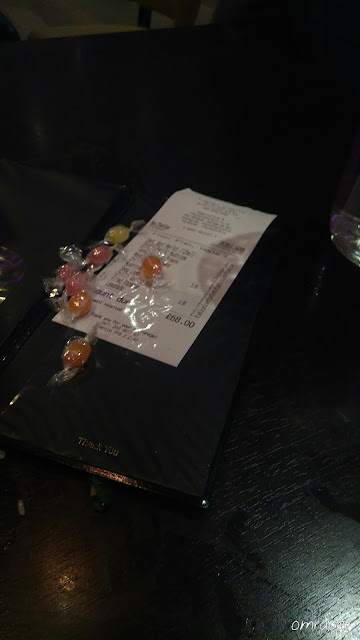 
It was quiet and calm tube from Whitestone until near the bank where a homeless guy was starting to beg for money, a few people gave him a quid or two. But then I changed to the DLR for the final time. Then I got on and it was nice and peaceful yet I didn't realise that these were self-driven trains and so I was in the front and film the way back.

Eventually by 10:40 I was back. Soi walked to the park to look at the Thames, and a FOX was on the road, it crawled into the park through the gate and well I did see its eyes when I was filming but it stayed away. And then I walked back, the final time before I pack up and leave for real home tomorrow, but planning has happened and Will be a good vlog if I don't sleep badly. See you soon. But I did miss her so fucking much and she's watching the game of thrones tonight and I will when I get home too.

Well, that was it, the best time I've had in a long time and finally heading back tomorrow was going to hurt.

Labels: #omracersholiday, 2019, date, Finchley, food, girl, indian, indian orchid, kings cross, may, omracer, oyster, sunday, time, tube
Newer Post Older Post Home
Also check out some reviews here
Also something about getting data, texts and phone minutes for nearly nothing (only if you OD on mobile data) and don't mind using the 3 Network is worth a click of FreedomPop