So the week back from the chance of meetups and chances to get productive, Time felt back to normal. But things I had planned which actually went wrong in some way. But we finally get to build up new things.

So after coming home on Saturday after work, One girl wanted to meet but I did say we could have met but since I was busy last weekend it didn't work out. But then I also got a message from one but 2 different girls, Now one I did message since she did look lovely. Eventually, we chatted and I got her an Indian, then dessert then her number, which for some unknown reason I found out later that week that when her screen was fixed, the number was changed but I think that was about £60 later. But getting a real name and actual real number out of it made it a very close call since it was close reporting her since there was a vibe of scam in the air. Hopefully, we do call but I think nothing serious will come from it yet but I and S found her real Bank address so its a unique twist in the plot.

That and work was busy, almost every evening was booked which is great, but also there were the thoughts of chatting to the amazing girl i met and also wanting to plan when to see her. Its looking like November but still a decision on that according to a poll will be before the Pokemon Pop up Shop Closes, Which actually I did the poll today but still it is looking like sure the food dates i've planned will be covered but I will do my best to get some footage of the pokemon pop up shop, but that closes on the day Sword and shield comes out. And I did send my phone to her which was just to do the right thing since its important to help friends out that actually need it,

Also, it was a chance of a new review. 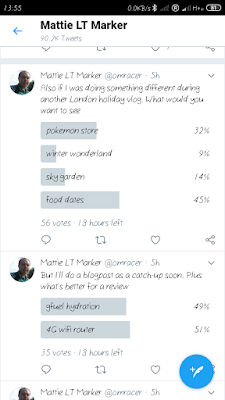 I'm surprised you want to see more of a 4G router for £35 instead of Gfuel Hydration but okay. Maybe I might get a collab for the review of Gfuel for a bit of attention or views. Also, I now have used my £10 credit on Cuniq and that now gets me 80GB of data for 2 months, which will be ideal

But also with announcement of Kik shutting down, it was looking glum for some of the chats. Well one feedee that I did chat too but she's engaged so it's just purely business on that end, but it also made closure on something that's been happening for the past 2 months which all I know is, for now, nothing will happen or not meeting at  least, But its friends only which is good actually so its not bad terms. And things have progressed locally with soon I will be able to see a friend in her new flat which will be great with her new place. But time will tell. Another girl from FF I talked to on Kik was one message then disappeared.

Now the main reason is that one of the other messages was from this girl,, we chatted and turns out she goes to one of the holiday parks near Exmouth which is cute, BUT she wanted £40 for her number and well okay I did take the bait and we chatted and yes fed her twice or so more after, but then it was getting to the stage like she was saying phone screen smashed AND she was robbed last night. Now that is a big burn on the skin so I reported her. But doing that is just stupid of Ka to do it but Feabie can sort that another day.

That and one girl I used to talk to ages ago i've gotten her number and its good to chat to her, she's really nice and again its just friends but she's a busy lady and does well to gain with the responsibility she has. But maybe I might meet her one feabie meet away.

Then it came to Sunday. Saturday was a wet finale

The birthday of a relative.

Well it was nice to catch up, I woke up at 9:45, was walking Rosie about 11 or so, then tech support on Directly until 12 which was shower time.


Then we walked in and got a seat, the cute girl from last time served us and well we all went on a roast Beef normal for all. Not bad for £8.90 each and they portions were huge and the pint of lime and lemonade is soo good.


Then we chatted and ate, I was hungry. We all enjoyed the roast and actually got really full so we skipped the dessert and then we walked out of there. It was slightly drying off as we left

Then it was more of catch up before we got home and the Rosie got really excited. Then we settled down and the cake was lit and we ate the Lidl chocolate celebration cake and then chatted. I also chatted to Kaylee and the other girl which was really nice. I might be getting both foods soon too.

Then it was time to say goodbye to the grandparents and sister at 4pm, which then we said it and I chatted then went to go #dogwalkingwithomracer. It was nice she enjoyed it and still chatting on WhatsApp and then as I walked back, the rainbow appeared.

Then I relaxed and got chatting and planned a few things and things went okay.

Later on, I managed to get the phone call but it seems it was a bloke on the phone, a male scouse accent it had the feeling of a catfish and asked some questions but its still something I have to work on. And well cookie dough to cheer a friend up is important as well.

But well that was it, another day done and new things await.

Email ThisBlogThis!Share to TwitterShare to FacebookShare to Pinterest
Labels: 2019, birthday, blog, Feabie, fifa20, food, girls, money, omracer, ps4, pub, rainbow, roast, september, sunday roast, whatsapp, work
Newer Post Older Post Home
Also check out some reviews here
Also something about getting data, texts and phone minutes for nearly nothing (only if you OD on mobile data) and don't mind using the 3 Network is worth a click of FreedomPop