So just to keep this blog post cleared up. a SHIT TON happened. It was worth it though.

The Saturday.
I woke up earlier for work and it was quite quiet, with various on and off jobs. But i did save a wedding reception by lending them an old laptop which had a VGA output as her macbook pro didn't HAHAHAHAHAHAHAHA, shit i forgot to take a picture for lunch. since i did reset and change the ROM on
. then Ran home and prepared for the 1st night out.  The vlog should explain most of what happened once i left. It was a boring night but ended up turning out great. Met some nice people and danced with a few people. There are videos of me so i will try and get them embedded or mirrored on here as and when. :)


I did get to sleep around 5am, after relaxing and getting a drink.
But i did get the drink from mcdonalds uploaded :) Well this

And this was the route i was running. The end point is where the Police Van picked me up.

Well i was awake around 8 or 9 ish, then i woke up and I had a nice breakfast which was a BBQ ribwich and some crisps :)

During that, i was editing the vlog i linked about. That took me around 3 hours, then i had a bath and after that my nan popped over and was talking to her for about 2 hours. After that, i had a nice chicken balit for a late lunch and early tea.

Then i was playing RR Unbounded and then Sid Meier's Railroads and also downloaded Ridge Racer Planetary sounds . THAT WAS THE BEST THING TO DO. The music was pretty much amazing Trance, House, Club music. Then i ran to the bus station and waited for the bus. I was the only one on it until it got into woolwell, then various people arrived on.

As i was in mutley, my sister called from america and she was surprised or shocked that the parents went out on a holiday for the weekend and the fact i was out for a bank holiday, but it was nice speaking to here a catching up for the last time on the phone. Then after the call which ended 20 minutes later. I got off then ran to union rooms but the queue was long so i went in the casino instead.

Then i Ran to the barbican and met alot of people. Then Partied in h2o and my shoes were sticking to the dancefloor which made it hard to dance, thats probably because of the tipped beer on the ground in the barbican itself. Then a friend invited me to Mcondalds so i ran to the top one and it was closed but then the door opened as someone was leaving and spoke to two nice girls. Probably the funniest thing i heard at the point was "my chips aint salty enough", not sure how i found it funny but it was.


Just had macdonalds and chatted about things with my main man @omracer twitter.com/jasminnegwalte…
— Jas(@jasminnegwalter) May 6, 2012


After they got a taxi home, i went to the barbican again and ventured some more then i decided to run to oceana and the queue was just long, really long, so i wandered around. Then went in Vue to take a piss, after that. to wait for the queue to go down,  i sat on the floor, next to this dark haired girl in a yellowish, flowery dress who was whining on the phone about having "her" id (probably was fake or not actually her's) but i was just tweeting about the long queue and listening to Sliding Beat. This song i've constantly played on my ipod last night. its from RR Planetary sounds. Have a listen :)
Then after some wating around, during which i also saw officer campbell (inside joke i'm not a part of but easy to understand). The queue went down around about 12:30 so i went in, paid. Said to the nice curly brunette hair'ed lass that it was 50p chaper tonight than last night, which is odd since of the Frankie Cocozza meetup would of made it more expensive. But as i got in. "CHRIST HOW THE FUCK CAN YOU WALK AROUND ITS SO FUCKING CROWDED". that was pretty much my thoughts when i got in there. But walked around, then met a good friend, Chloe Scott. it was soo nice to hug her :)

notice where my hands are ;P

Well after that, i met this guy nicknamed China John and shaken his hand and had a photo with me, him and Chloe. Then we went our separate ways and i walked around. Then went in the disco room and a bouncer said "You ware outside were you ?,  I heard you were refused entry, stay there". Luckily some friends of Charley's (Nicola Boyer and some others) saw me there so we danced and i think grinded but i'm not so sure. But then the bouncer disappeared then came back and said "oh your still there" and gave a thumbs up. Nothing happened and assume i wasn't in trouble.

Then later i walked to the ice room again and looked around and then i saw there was a balcony above and danced for a little bit then went out and upstairs and i then saw a girl i used to have a twitter crush on a year or so ago and also brought 2100 Microsoft Points for her 18th (which she thought was a joke when i said to her about it months before her 18th. She was wearing a nice blue or teal (depending on the lighting since of the coloured lights around the complex) dress and her hair was styled really nicely and also had a blonde friend which i've mentioned slightly in other blog posts. I was mostly trying to get her to reconigse me which was pretty difficult. I tried various sly and open methods such as walk past her, tap her on the shoulder and even sat next to her and he plush arm was touching my arms. But it didn't work.

I did go upstairs to the Paris themed lounge and relaxed and then saw a friend from Tavi College and Crappy City Plym. Summer Rosenquest and her bf, we chatted about various things then i walked with her downstairs to meet other friends of her which i also knew (megan case was one). It was packed and also i did see the Z-list Celeb...Frankie Cocozza posing with pictures while searching for meg. Which i was also behind the girl i had the twitter crush on. #

Then it was 1:30 and i decided to run to woolwell then order a taxi back to Tavistock. So i started sprinting, listening to Planetary Sounds and then two guys asked "Your mattie marker aren't you" i said "yes". He then wanted a pic of me and one of the guys, below is that pic :) 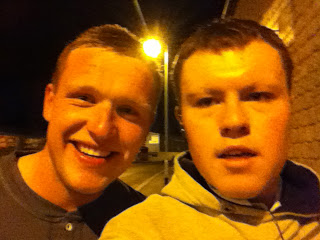 After chatting to them about various topics (one actually being about the girl i had a twitter crush on), i carried on my Journey to Woolwell before 3am. Then i got to the train station and some guy was talking to mer about his problems. No seriously, if you listen to this audio file (m4a Apple ACC) below you can understand what the hell he was on about and also the advice i gave him and vice versa. Varying from buying a drink and being told hes nicking drinks then being chased and assaulted ?


After that which ended around 2:30 at the E$$O (remember when Esso Gas stations used to be called that lol) by Devonport High School for Girls, by this time it was starting to rain and so i ran from here to woolwell, the rain was getting heavier and me wetter and also it was quite cold which wasn't helping.
So i got to Woolwell bus stop at around 3:05am. Now i called various Taxi companies such as TaxiFast, Silverline, Tower Cabs and they had waits from 30 minutes to 1 hour. I actually said "ah shit" on the phone to each of them. Then i found Crownhill Taxi's and they had a cab in woolwell so it was only a 10 minute wait and then he arrived and he dropped me off to the NHS clinic. From there the weather was dry and i ran home, then got a drink and locked up the backdoor and then went in bed.


So now i've been out in Plymouth 4 times. and hopefully i can do more but won't be for a few months. The rest of the week will be up on Fri :)

Cheers
Labels: blog, clubbing, fun, love, omracer, party, run, running, someone, special, video editing, vlog
Location: Plymouth Clubbing
Newer Post Older Post Home
Also check out some reviews here
Also something about getting data, texts and phone minutes for nearly nothing (only if you OD on mobile data) and don't mind using the 3 Network is worth a click of FreedomPop