Well as most will know. Its been a Bank Holiday this weekend. As most people do, they go out to get pissed/drunk/mortal/wasted on the Barbican in Plymouth then the usual clubs get busy. Now with a chance to go out, i decided to take it and enjoy myself. However, i was invited to a birthday combination of two girls. one of the girls really wanted me to be there, heck she even called the night before when i was at The House, so i had to leave at a certain time.

Although i did travel to my grandparents house for a roast at 12:30 which was quite a nice enjoyment and good to catch up with relatives that actually care (most people can relate to this). The roast was a roast gammon and you can see the desert as well :).


Anyway, after a nice catch up and helping to fix my grandad's laptop as usual, me and my sister headed off home and i started to prepare to get going. Technically i was editing the videos from the Saturday night but with getting prepared for the night, i had to make sure i had what i needed and make sure i actually catch the bus this time. So i ran at 16:38 and made it with 3 minutes to spare this time. I paid £6.35 this time, which is odd since i had a different day pass than what i purchased on the Saturday night.

While i was on the bus, around 17:20, one of the girls called me to make sure i was on my way there, i said i was at the flyover and then she said if i can get there for 17:50 or she would of held the boat up for waiting for me, which is kinda cute and did make me smile. Well i got off at the Plymouth Library Bus stop then technically the vlog begins at this point, well to introduce and tell you the happenings on this night.


But on the way, it was hot, i didn't want to sweat my favourite t-shirt out just yet, so i ran from PCAD to the barbican topless and on the way, just as i get into the Barbican, two girls i find hot caught my eye and got me over there, i do see them later but for now here are the pics of me and them: 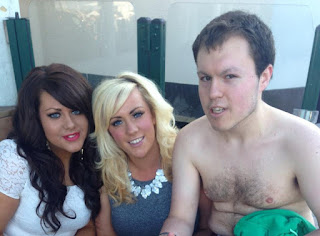 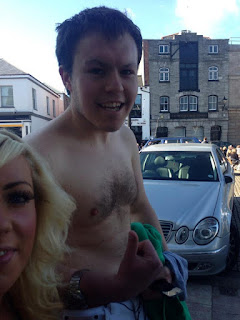 After that. I run and put the shirts back on to get onto the boat, when i was in the queue, you'd be surprised how many more women there were to men. No seriously, there was only 8 to 10 guys including me, the rest were girls. i must of been the only single guy on that, the rest were married or dating, it did feel kinda awkward with that but it wasn't too bad. ok maybe it was awkward and irritable when one girl asked me to chat to her boyfriend to keep him occupied while he was sipping a beer. But on the way in, some women was worrying if there was lines in her pencil skirt, i said no, other girls laughed. She does shout bacon strips a few times  in the night and i even have a picture, if i find it, i'll link it below :).

It was nice talking to a few girls and heck even a few 30- 40 year old women and believe it or not, some were ann summers reps. But some chats were pretty good, some were annoying and not everyday i have a blonde sit on my lap, her dad made a joke to me saying how lucky and i'll only ever get that once. Later on, i fed the same girl a slice of her sisters birthday cake.

Also i tried Ustream for the first time on my tipo using Data and it was not too bad, it might be a bit laggy but 3g when your on a boat is never a fast connection to be fair. You can watch the footage below:


Video streaming by Ustream
Throughout the time, the girl that invited me was getting more and more intoxicated, she puked a few times, fell over. But she was always wanting to hug me and wanted me next to her. As unknowing to why she wanted me around her, even infront of her boyfriend, it felt good both morally and a few times sexually. But chatting to one of her mates who i used to know until she moved up north was quite nice. There wasn't much  else that happened that i can remeber, except maybe there was this girl with a sexy flower dress and her boobs couldn't be contained, but thats about it. Enjoy some of the pics of views and one of the cakes. The other cake was featured in the vlog.

Some of the music was cheesy, some tunes were pretty , but i did pole dance twice. The first time i went OTT and hurt my groin, the 2nd was before i left the boat. Also there was a pot someone was bringing round for people to donate towards the cost for hosting the party. i put a tenner in, well it was a good-ish time so i felt it was worth it :).


And so the boat cruise was over, it was about 21:05 and then i decided to head out into the main section of the barbican, it was still packed and i was slightly thirsty. Well i haven't had a drink since i left my house and that was 16:50 and i've only had a slice of the above cake to eat after the roast at my grandmother's place.
But as i said in the scene at this point, i had none easily manageable change so i decided to go to my favourite casino for a few games of blackjack, it was not too bad, i was worried i would of not found a seat to be able to play, just by luck, i found one and played a few rounds. After i made sure i was intact with the value i gambled (£20) i got it changed and made it into 2 £5 notes and a £10, to be on the safe side.


So i left the casino and back to the barbican, just generally browsing, saw many people that knew who i was but i didn't know them. So i had pictures with many people with various poses, some with girls who i do like, some even wanted me to join them, but they ended up taking a cab. Anyways enjoy some of the pics  that were taken and a couple of videos too, one was featured in the vlog, the better one was uploaded after i uploaded the vlog, which makes it a shame.

While wondering around various bars and pubs that were free so i could order some water from the bar with ease, i met a girl who i follow on twitter. She has a gigantic appetite and i was with her for a short while, she asked cute questions, well ok mostly "do you think i'm fat" and "would you buy me a burger" type questions, but still it was nice meeting her. Then i met her friends who i know quite well and one i do like quite a bit. Sophie & Emma. Now this is a different Emma  although she has the same kindness as the girl i love, she treats me like a good friend and I've met up with her a few times. But we hugged and chatted for a short while then she wanted me to join her so I did.

Later on, about 22:30, i decide to run to oceana. Well that was a nice fast run, its better when you can listen to a cash cash remix of a amazing boss theme on the way which helps. I got in there, ID'ed and passport was fine, it was packed and just as i get in there, the staff open the main club up. Then the ice room opens and most people flood the dancefloor and rave to the casual dance charts. The night was pretty much dancing and wondering and pics with many people, although i did see a girl i liked and she tried to avoid me, her mate said hi though, well actually she did my pose as a welcome gesture. But then again, i need to plan something if i do decide to try to date Sophie H. Enjoy some pics of the night:

Well it was fun when wondering around oceana, various events happened around, people made out, chatting to various girls, seeing the girl that was involved in Saturday nights fun and we were dancing and she helped me out with these 2 guys who were trying to do a rave crowd around me. That and i sat down resting, i had kelsey sit next to me and she said how drunk she was. Also at another point, a girl i knew danced with me and hugged me. That and seeing one of my ex girls i fell for was a bit of a worry, that and Abbey's best mate Danielle said hi and her mate was next to her.


But as amazing as it was, things had to end. It was 1:30 and i decided to run home, which i did and worked out pretty fine, yes it was scary as fuck and my legs are killing me, even as i type this, but it was worth it. I scared a horse since i heard it clop and sprint out as i was running, using only my Tipo as a torch to show me the way on the middle of the moors. But it was getting nearer and nearer home, i was not giving up. By the time i reached tavistock, it was visible to see without light, birds were tweeting and i arrived safely at 05:03am. But below is a pic of Yelverton at 3:35am ish:

So this concludes the Bank Holiday for me. Its been a good one, with fun, sexual exploration on Saturday and a nice BBQ on the Monday to finish it all off. With work tomorrow and also another event for me to vlog this Sunday arriving (Sunday 12th may 2013) for the Go Sky Ride event, I'll be quite busy.

The search for love is still at the waiting for an opportunity for the chance to strike. Part of me is being a bit of a player and wanting to get to know other girls, 2 or 3 in particular. That i won't go into now but its an idea that i need to explore. But for now, hope this gave you a better insight with how my night went coinciding with the vlog.

Hope to see you in the next one and also thanks for the views, nearing 6,000 views is pretty good, blogs are never as popular are vlogs but i didn't work at this as early as i maybe should have.

Mattie
Labels: 2013, 21st, Barbican, birthday, Boat, Booze Cruise, clubbing, dancing, drinks, girls, home, night out, party, plymouth, Plymouth Sound, running, vlog
Newer Post Older Post Home
Also check out some reviews here
Also something about getting data, texts and phone minutes for nearly nothing (only if you OD on mobile data) and don't mind using the 3 Network is worth a click of FreedomPop