Well with product reviews and people having time off, it was time to get a meal out going, swaggy and miss dougall got it arranged, they called on the Friday after hose fair then after some tweetings, the house, me, laruen, elosie, muneetha and even charley were going to go.

Enjoy the vlog below:

The Tuesday I thought I would be clever and work an extra day, now it was productive but I was an idiot and left this wayyy to late. I got home at 5:15 then out by 5:40 and blitzed it to lidl, but the bus roared passed me as I  got to the morrisons roundabout and I pelted it to horrabridge, which was not too bad in 45 minutes from my house there.

I got there with a soaked shirt and sligltly wet hoodie, but after waiting 5 minutes, I managed to get on the right bus, then it was a quiet journey. Knowing I have a even longer run ahead of me, I had to get PFF at derriford, since the closest way to get to plympton was using back roads. This turned out to be one of the scariest runs I've done in and around Plymouth. The run consisted of running through science parks, a lane that was giving the feeling I was in the middle of nowhere, chavy housing estates and passing marsh mills. I did get from Marjon to the harvester in plympton, it was a scary time and with the help of Google maps and a torch on the phone. I made it in 49 minutes.

When I got near the pub, it was interesting that two girls in a black car started shouting my name, then we had a Snapchat together and they even offered a lift. Since it was close, I said its okay.

Insert snap if needed or found

Now I made it and after searching, I found the house and we all greeted each other, while I was still sort of drenched in sweat. But it was good to catch up. Various chats and it turns out laruen, charley and Eloise had bottled it. James even said how he put a bottle on that WhatsApp chat I used to be in but I got rid of the app.
Then I let them borrow glass while I had to go and change, but it worked and everyone was fascinated with it, I mean I heard that I'm probably one of the very few Plymouthian area people that have it. I think Pete got carried away about snapping tea 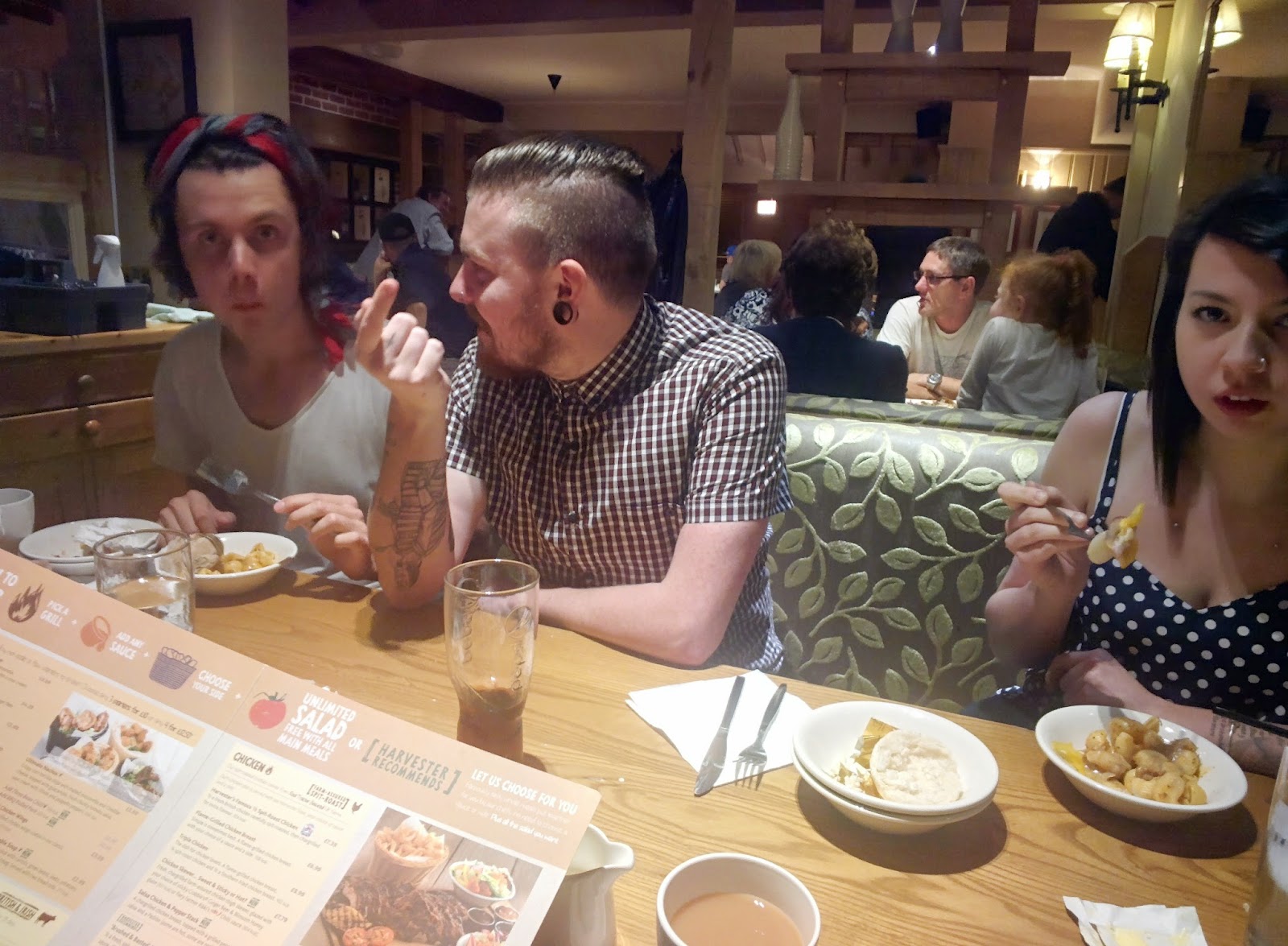 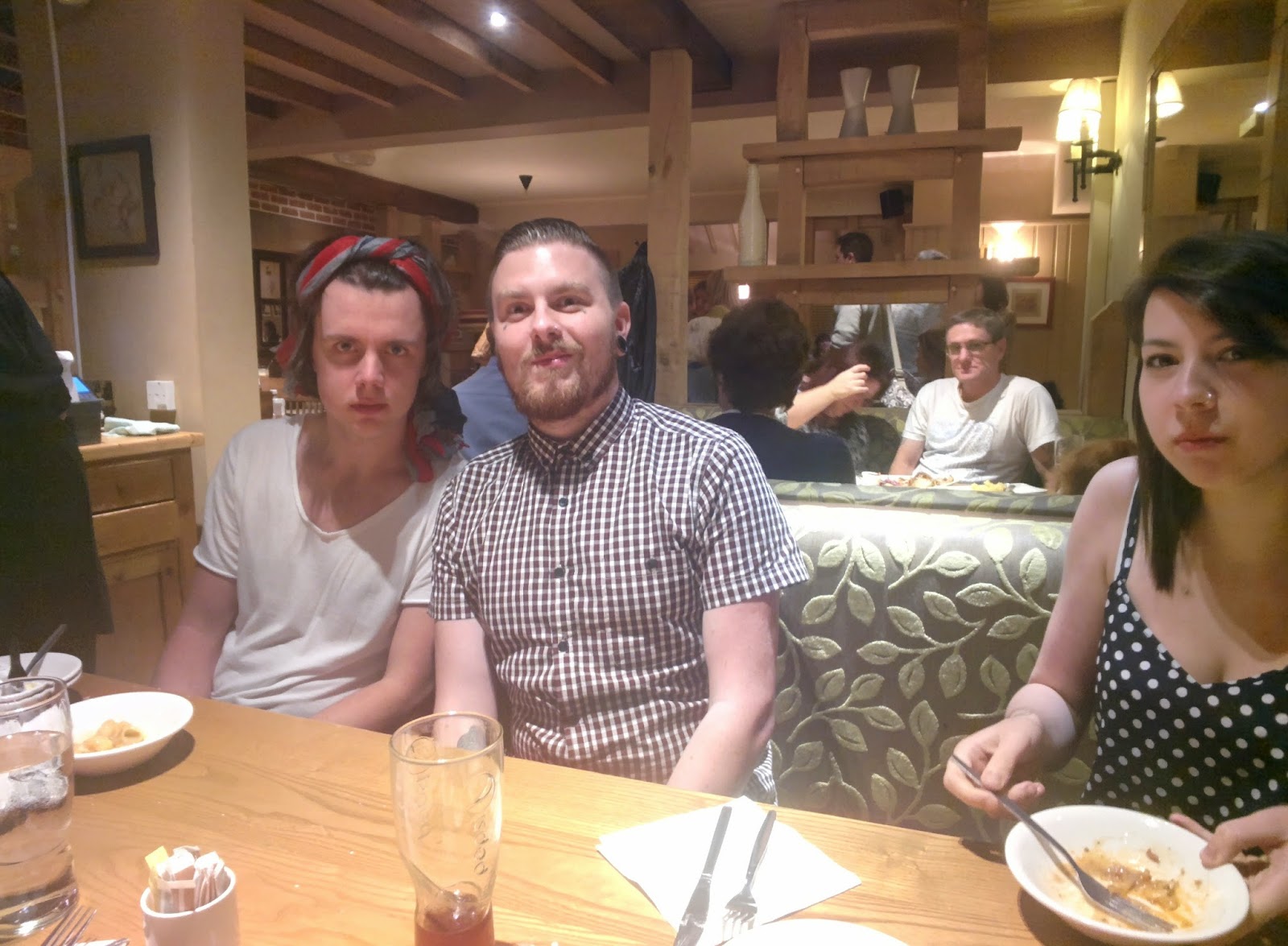 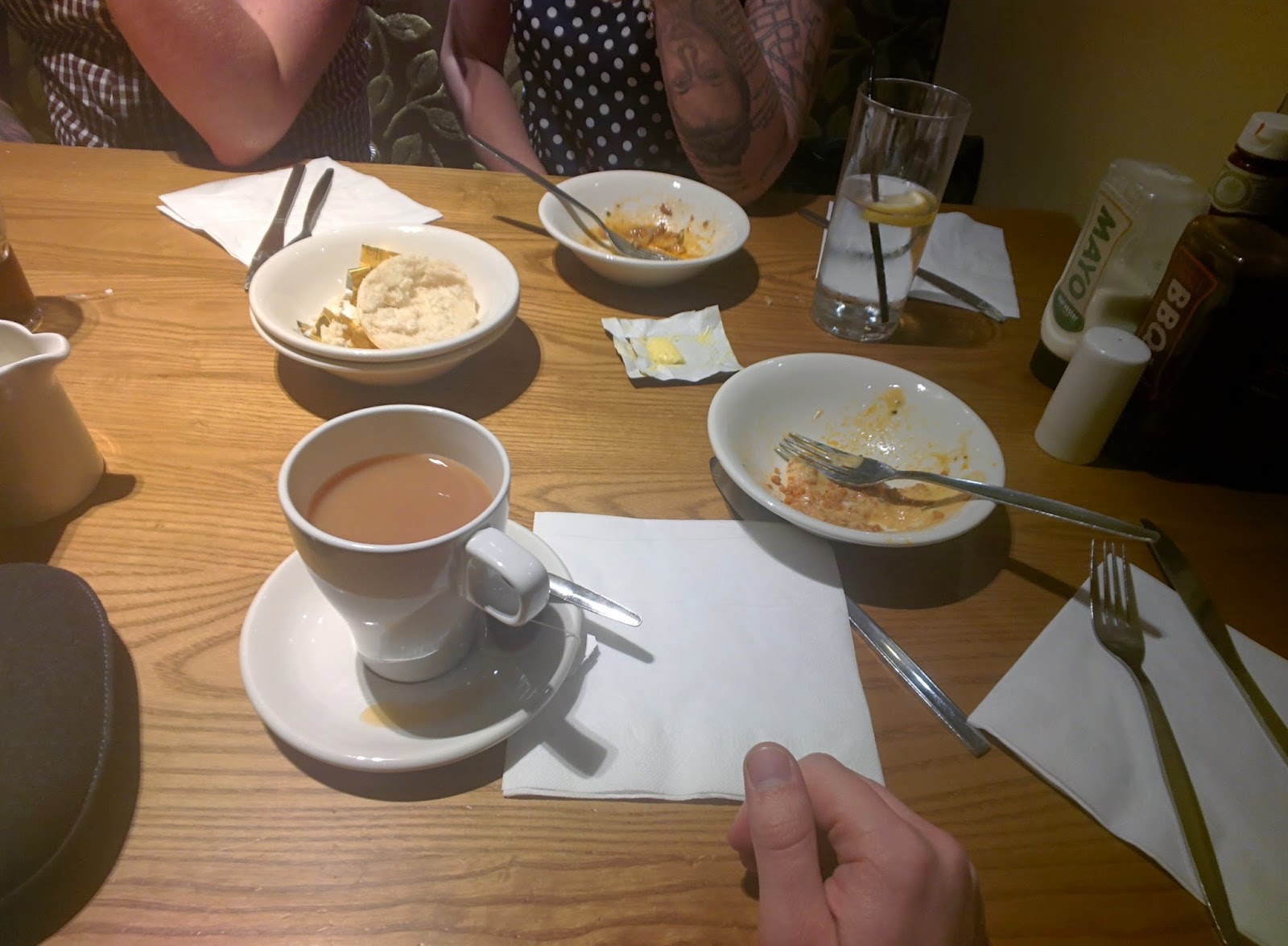 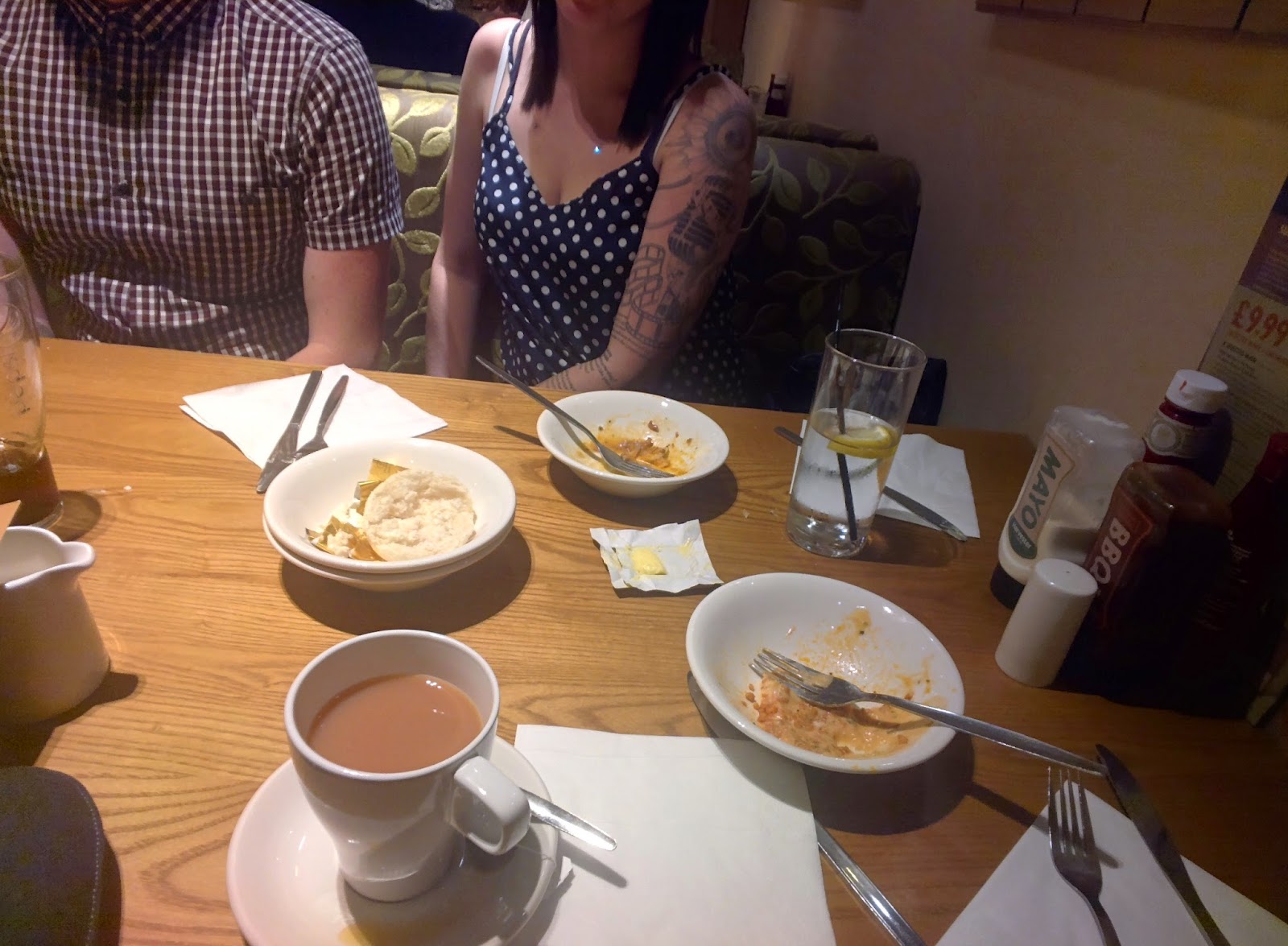 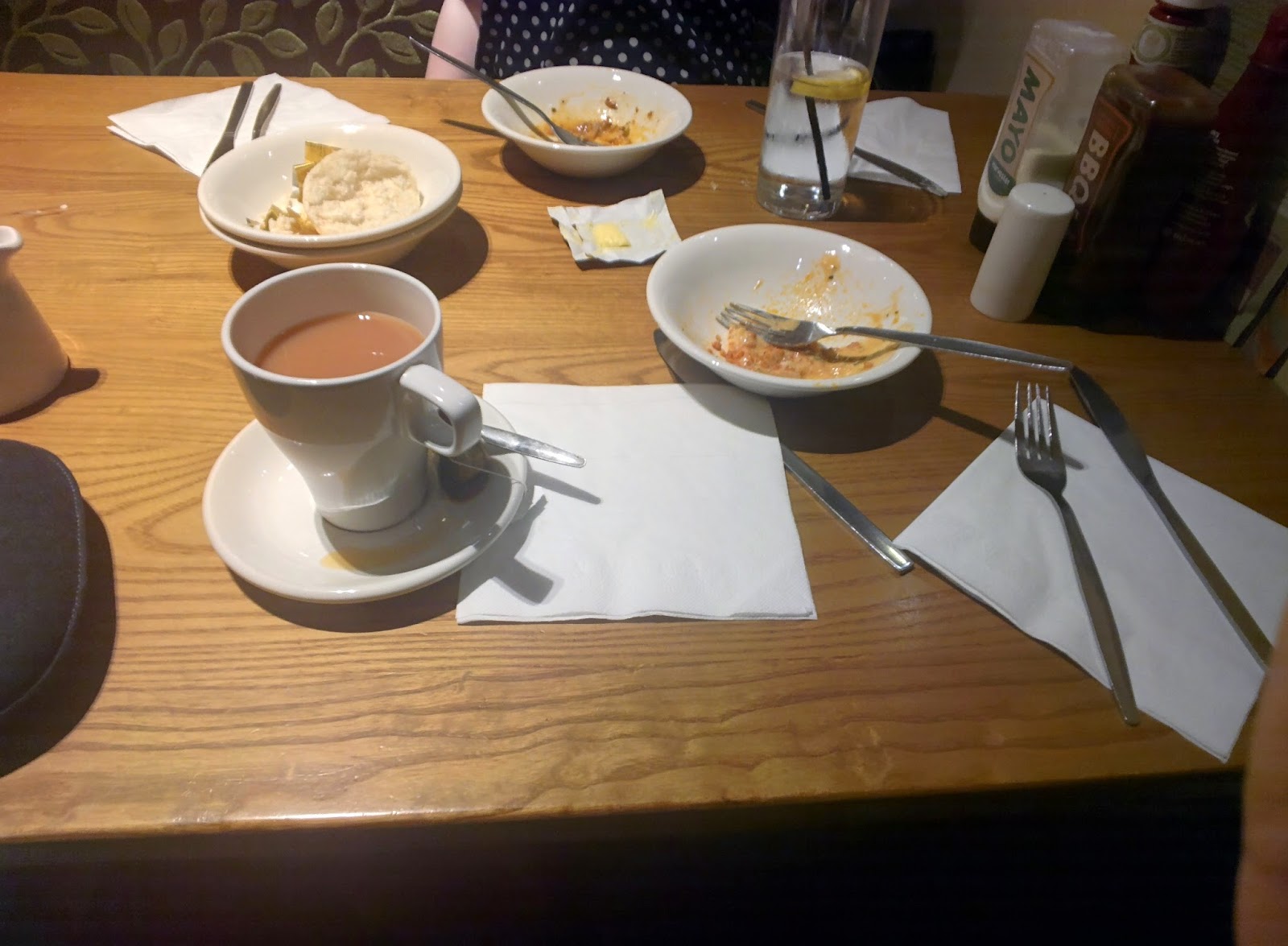 Then there was wrestling talk with the make a wish foundation thing, which they all said about meeting said people. But after I was out changing and taking a piss, I had to get to the bar but didn't order
So the waiter took my order.
1 x beef burger with chips an BBQ sauce - £7.99
1 x pomegranate and elderflower coridal with soda and ice - £1.75
Then I was told to get the salad started so I topped up with rice, onions, onion flakes, bacon bits, bread, sweet corn and thousand island dressing. It was nice I must admit. 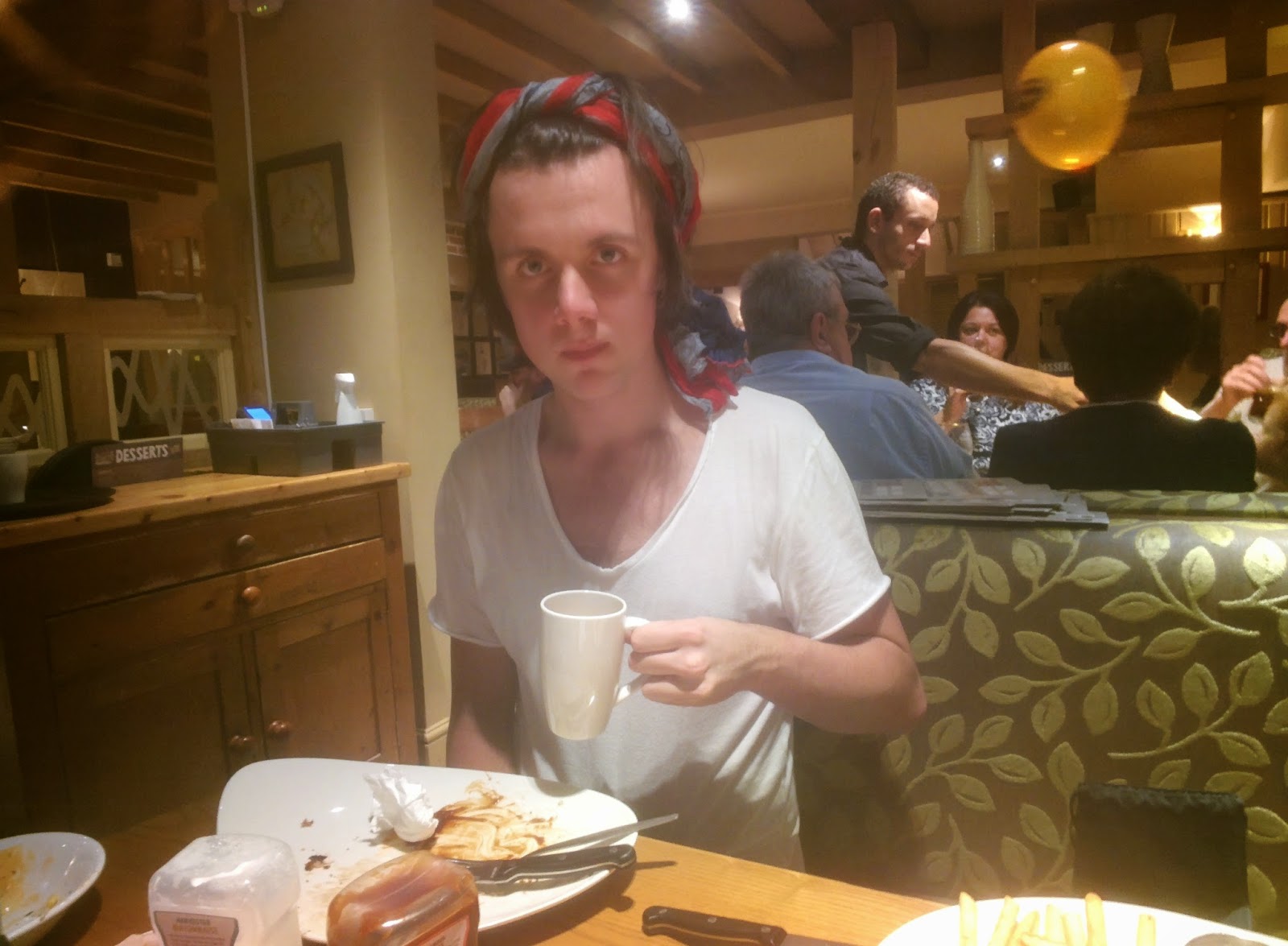 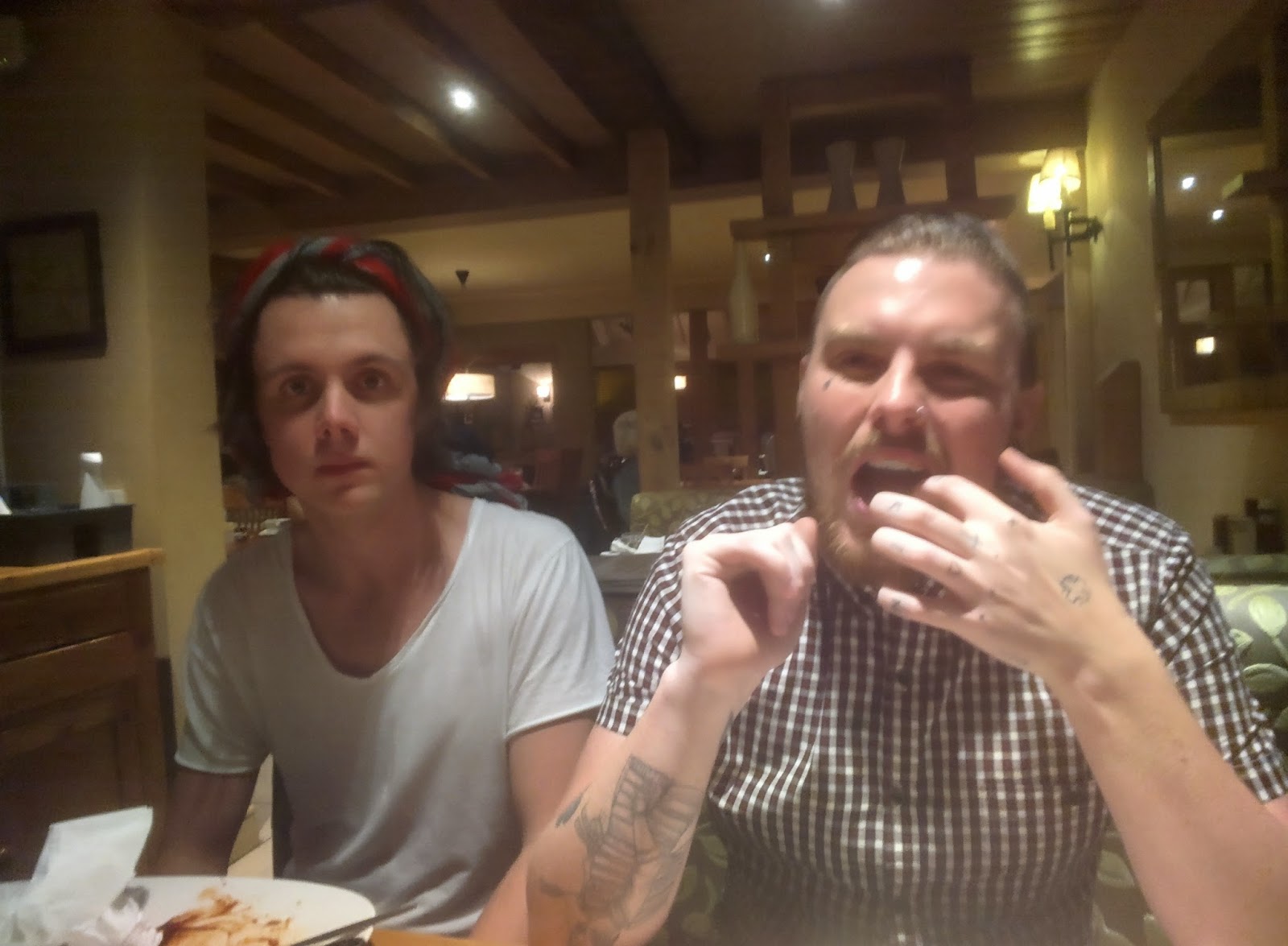 Then it was some glass fun of eating and some type of banter, it was ok, I was a bit worried about staff reactions, since I don't want to be a glasshole this early. Also Pete said I got it quite early, he talked to it soooo posh. The chatting and indulging got on and soon it was about 8:20 and desert was an option, the waiter was a class bey, I think someone mentioned moshpit. I ordered an apple juice for £1.80 and that was for a small, which was plenty to ease down the food especially as I had to find my own way back.

But after the couple had a matchmaker sundae and swaggy had a mint choc sundae, it was time to settle up, we almost all decided to make the calculations, the total for us all (6) was £48.54 and then everyone paid the amounts for their food. Mine came to £11.54 altogether which was reasonable for food and 2 drinks (3 since I drank half a glass of some used j20 so that was free). Then we all left. We started walking back but the house had to get the bus back and I almost tripped before running into town through the embankment road.

The journey almost killed me  by the time I got to town, my legs were almost ready to explode and I was limping or very close. As I strolled around the barbican, it was slightly peaceful and some live music was playing.

Then it was a case of getting a drink from Bronti's work. This might of been a mistake, well I went in, I let a guy order before me. Then a different girl served me and I clearly said "are there any non alcoholic drinks for under £0.50". She said no so I ordered a glass of water, then her manager said there were cordials but by the time I ordered them they were £0.55. This was annoying since I had no change and she said " I see notes". So I ended up having to use a £10 note. Sorry but that is a pisstake. But she said its policy so that was me out just after I gulped it down.

Then I wandered and after getting to the bus stop, I was 45 minutes early, but before that, I was asked by a guy outside the student tescos and I said I don't smoke then he said "I gotta stop doing that" which then he was in a drunken tissy.

As the bus stop was outside the brass monkey, I say JP and then  we caught up, started talking and I let him try glass, he was fascinated by them. Then I met immogen, she was a nice brunette short haired girl with nice eyes and it was nice speaking to her. 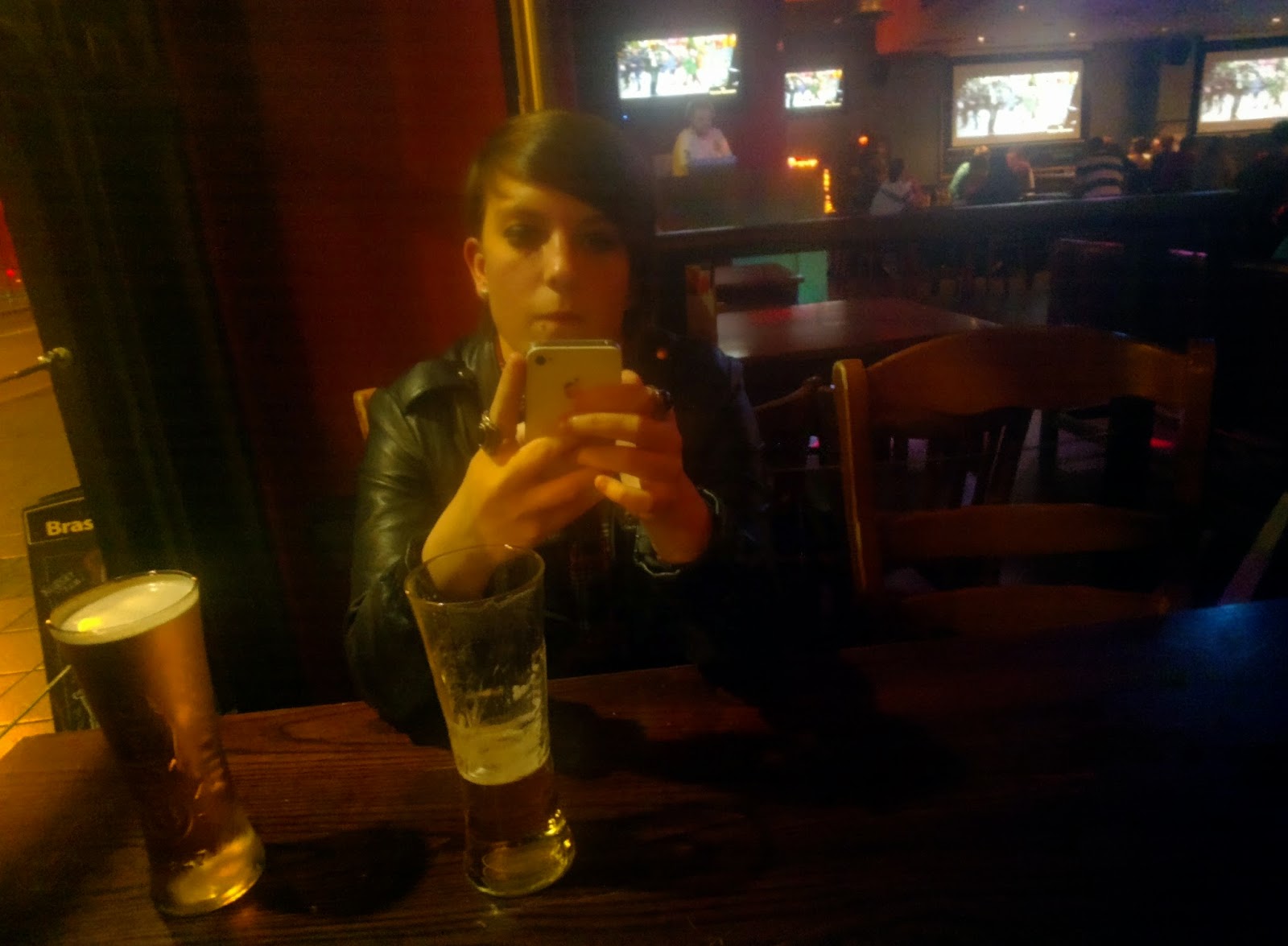 Then he gave me a drunk heart to heart saying or basically "your a nice guy and if anyone upset you, I'll be the first to say Fuck off to them, but you need to think of yourself more often" which I know I agree with but its not easy when you know that that is the only way of making effort that doesn't get ignored or just dusted under the carpet which is sad but it has actually gotten me further than all talk and no proof if how much I care about her.

Then I decided for another glass of water since my thirst was like a guy who can't control his dick that gets pushed and makes a woman fertile. That helped but I was getting slightly tired, nodding my head to some meh beats, then those 2 were shocked when I said I don't drink and even JP put my birthday night out in his Samsung calendar.

By 11:35, I went to wait for the bus and it was empty when it got in at 11:40. I showed the ticket and a relaxing ride to lidl. The bus was quite with only 4 people including myself, then by the final stop in Plymouth,. it was just me and this girl that was sleeping, i got off at lidl then ran or even just limped when trying to listen to music then i got in at 12:50 and crashed out.

That is a first evening out with mates #throughglass and its been not too bad, maybe it was a bit far to get to, but maybe there can always be a shorter friend meal out soon

Email ThisBlogThis!Share to TwitterShare to FacebookShare to Pinterest
Labels: 2014, blog, drinks, food, friends, glass, google glass, Harvester, night, october, omracer, plymouth, Plympton, running, salad, the house, The unicorn, vlog, wet
Location: The Unicorn
Newer Post Older Post Home
Also check out some reviews here
Also something about getting data, texts and phone minutes for nearly nothing (only if you OD on mobile data) and don't mind using the 3 Network is worth a click of FreedomPop