So, after being rushed off my feet at the last moments to get the vlog and blogpost of the daytime up. Even though it Was my fault for procrastinating just as i got in which was a stupid mistake to make. But eventually after hours and nearly getting dark and changing and selfie stick unboxing. I was ready to leave for the night by 7:30. Once i got there, the vlog started with a selfie stick :)


Then i explored and wondered down to the fairground, seeing the sights and the bargains but closer down i got a text from Pete saying he's on his way to Tavi, so he said he made it just as i was walking to the square. But as i got to the atlanta dodgems, I didn't see him, so i rushed down to the main square to find him and the house :). 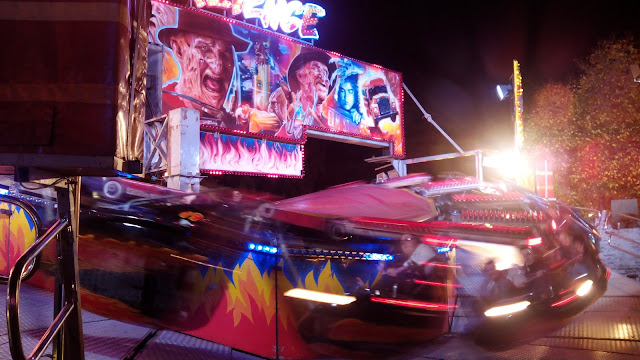 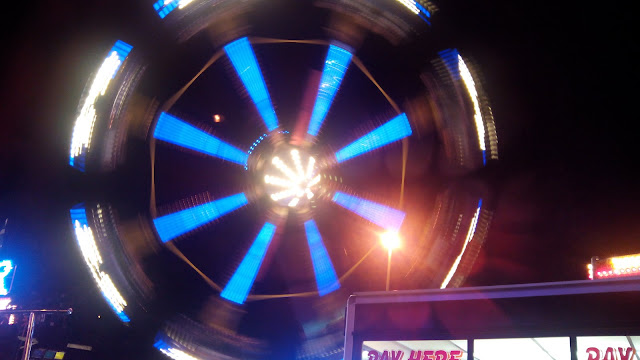 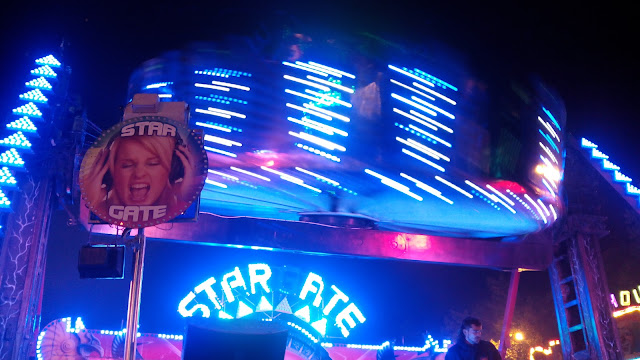 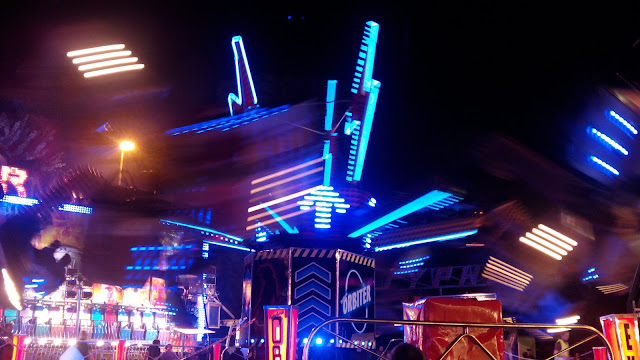 Eventually we greeted and the first thing on his mind was Donuts, so me, him, swaggy, Hayley, Nath and his lover, we all set off up the main street, showing them the sights and to find a donut stand, since he was a desperate lad for them. We eventually got them much further up, maybe near the car park. Then we all went chatting and some bought food and sweets and then hayley bought noodles, We must of lost parts of the house about 5 times, which in crowds were scary for some. 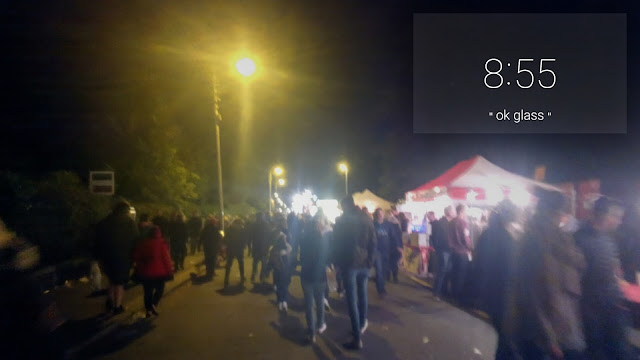 Later we walked back down and then after some marshmellow and Pete buying weed bandanas and was close to a nepal shirt after lending james 50p, They were mostly hyped but then the girls went off to the entrance to the path near meadowlands for a smoke which took almost 20 minutes, eventually we all walked to the booster then walked to the square via the same path via the River. 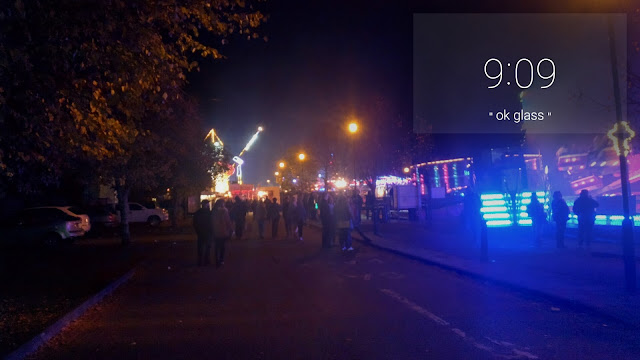 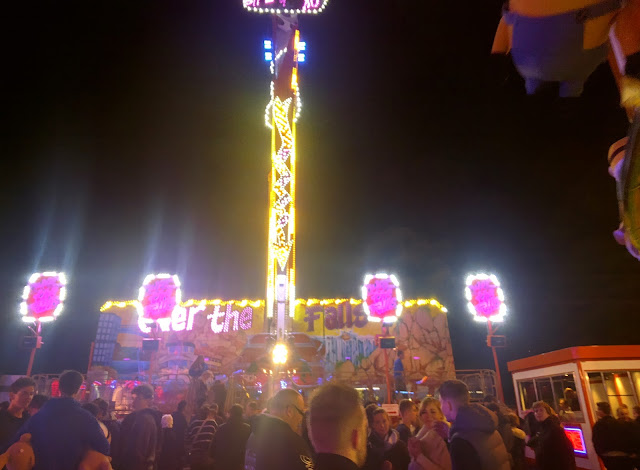 But soon, we walked down since the house suggested i try the PSYCHO Juice and so after a wait of 2 minutes for others, I got the selfie stick, we all decided on what one to try, the guy that served us said how old google glass was which made me a bit grr but none the less some Extreme Ghost Pepper on a plain piece of crisps was the plan. BIG MISTAKE.


At first i did taste the pepper but soon it kicked in and it made me feel like the last time i bawled my eyes out like that was when i argued with Abbey and told her i love her even though there was no chance back then 6 years ago to have a chance with her. But the weird thing is, I was laughing in hysterics type of crying but the nose was really runny and man i really made a mess of myself. So we decided to get some slush, actually i HAD to BUY some slush since deadly sauce.
So i managed to buy a £2 bottle to fill with slush and the guy thought i was really drunk and he said "if you don't drink milk, your fucked" then it gotten to some stories with hot sauce paralysing someone, i filled up and slurped but it frozen really quickly.


Then we wandered back down since it was nearing the 9:40 pm time and pete ended up buying a Digiridoo, no i'm serious, he got one of those bad boys for a Tenner and he tried playing it but struggled with the blowing so he asked the sales guy for help which he did in the right direction.
Then we wandered to the square and had a few selfies. 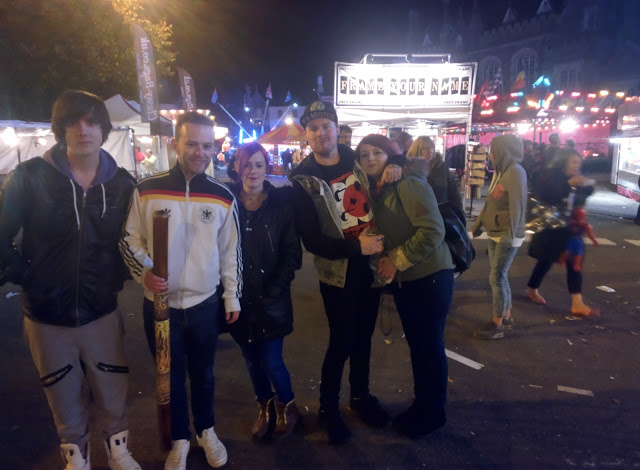 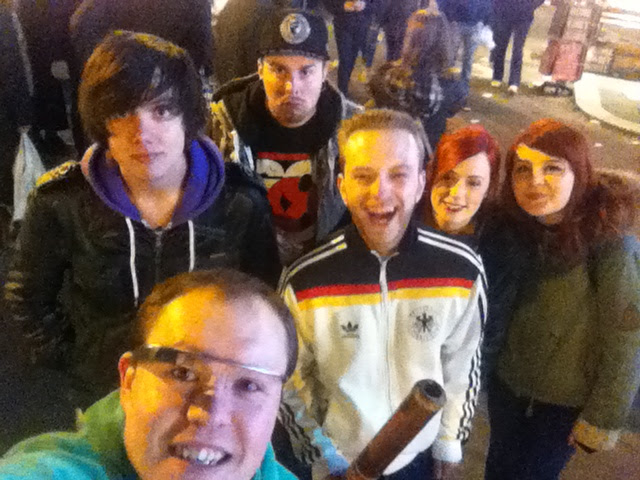 Then it was the walk back to the car for them, while nearly getting a free refill of slush along the way and it was about 10pm, so with my throat still killing a mini bit and hugging hayley as well as possible going frankie's & benny's for her birthday soon, I ran back and made my way back home. With pics and some purchases along the way. Donuts and incense sticks, and i even forgot the slush bottle. Typcial me.


Then a selfie to end it on the way home and the run was nice and i got back home around the 10:40 mark then typing and resident evil while noming on donuts was nice.

And that makes the actual Goose Fair Day done for another year, the next and final vlog of the fair will be Saturday and it will be nice to have a night out in Tavi until i get bored or stared at for drinking water or not drinking, but we will see.