A First Person Half Marathon

This is it, the surprise I've been wanting to tell you for a few months. With glass ready, phone fully charged, iPod dead from the washing machine and even things being said in work which made me decide that things are going to change and games finished, we really have had an interesting April.
THE VLOG IS BELOW:

As i had my shave last night,  had a feabie browse for a quick while, weighed in at 194.6lbs and only with a 5 hour sleep with 1 hour of it deep. I was awake at 6:15 and by 6:20 got up and then got prepared for what this day would have instore. I got my vitamin drink ready since 1 vitamin a day has normally helped and got me energy in a healthy-eqsue way.


Then it was changing into the night out shirt and jeans that were loose. Which helped and the former night out shoes which i had ran in before.
Then got the gear ready for me before going.


Mum and dad were awake so it was time to say goodbye and see them later, mum is shaky since she had a car break in when dogwalking yesterday, fucking white vans. And dad was tired as his Sunday self. I ran at 6:50 to get to lidl.

Now i got to lidl and mike was waiting for me, he was kind to offer me a lift in and I've helped him out as a customer anyway so it's fair but also very nice of him.We got going and chatted about things and how beautiful the moors and Cornwall along with Plymouth is and the co.parasion of age is a real hint but we were both fair about it. But by 7:30 i was in drakes circus which i needed toilet before this run was to happen.


I was typing this up in the toilets white needing to go then I got changed or just add the tag on which was not too bad by 8am, i was ready to run. I walked to the hoe, runners are everywhere and also i was really casually dressed for this. Bug this is fine as far as i know. I managed to get in the starting line after seeing so many views and there were crowds


The ocean city half marathon

Before we start, look HERE for the Map of the Route.

Now we paced ourselves on the road and i might of had a faster pace than i thought to being with since i past the 2:15 pace position. But the sun was out, the sky was clear and the support from crowds at every position was astounding, no need seemed to care that glass was used and to be far it was crowded but plenty of room for overtaking. Which for majority of the run, this was the case. But i tried to pace myself and it was water bottles being placed at various parts which really did put the hold out on being thirsty, I skipped the first one but eventually got to need one by cattle down.


Then it was from cattle own to the range and that was length and maybe the 2nd hardest bit. I really felt it was long and the slight curve you could see was really tricky but then it was tiring left to get to that new town and also Saltram. Which there was the 7 to 8 mile mark.


Then it was tiring left to get to that new town and also Saltram. Which there was the 7 to 8 mile mark. But seriously The place looked Beautiful it was green, the sun was out, the quarry looked proper, the farm smells were there (dung) and so much people cheering me and others on. Passing guys pushing a wheelchair topless and construction work on some of the paths.

But once it was back  via Chelsea meadow which itself felt long but the water stand helped,  it really got to test my endurance, the embankment road is one long chance of hope running on and having it go up halfway and back down was pointless but very testing of my legs which were starting to feel weaker. But so much support and lovely weather and sweat everywhere.

But soon I was running back the way i started which the route says and after the final drinks stand, my pace was slowing down and the 2:15 was catching up to me and boy i was worried.

But my legs didn't want to but had to, but then the final pace when going near the barbican really was hard and the hoe i was at the point that the 2:15 had past me.


But when it came to the last corner and finish line, i pelted it and nearly gave a heart attack. But i crossed the line and mi fit, which had shocking results of GPS accuracy, didn't really record most of the journey. But 2:15:31 it had said. The timer said 2:17:3x and i was proud. The 2:15 was when I actually started to run towards the starting line since when the timer beeped, there was a start and stop.

I got to the tents and picked up the winners goody bags which was pretty good to be fair. I picked up the shirt but did forget the medals and also a special drink to do a mini review on. I eventually picked up those after getting wobbly legs


The results and walk back to town


After this, i made my way to the info booth which mentioned the times my number chip had as well as the time from when the starting gun was shot. And the time on the chip was 2:14:00 and i was impressed. Then i walked my way to town and had a drink of that superjuice and it was ok but has a bad tang in the mouth which i would eventually had cured by Aloevera juice.

Then i walked into town, Poundland near CEX was ok, the tango ice lollies are back in, the queue was short and i popped into CEX which had some deals around. But i made my way to drakes circus to relax my legs and also get changed. By 12:20, i was out and getting those drinks. Which was pretty much a odd one due to the fact that poundland didn't have Aloevera​ juice anymore. But i did notice those ice lollies were back in and also my mum loves oreos so a 24 pack box for £2 was handy. Which was a £4.00 total in all.

Also on my wandering, Maplin had Google home in for £129 but i had to say no since I've spent a bit of money this week. That and game had some deals and hubbox was packed with deliveroo but no India. And then it was time to have 2 bottles of aloevera juice and another wander around before i felt exhausted at 1:45.


I tried to check the Timed for buses but sadly stagecoach have safetynet now,  so i had to get rid of the app and Google maps was pretty accurate on bus times. I ran up to Mutley which only took 8 minutes even with a exhausted body and aching feet. 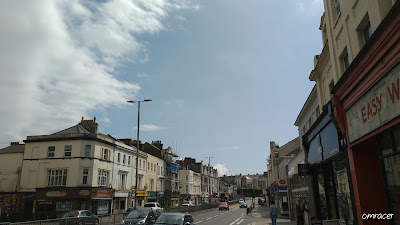 I waited for the bus and paid the fee of £5.00 for a single and it was a relaxing way home. Shame the clouds were forming on the moors and the humid feeling came to be.


Then i got to the bus stop and my journey ended there. Time for one last run home i thought. But at least i can say I've done this now.

I will try to get more videos up but for now, those legs need to rest