omracer's Holiday: The Hot Way up in May (Day 1)

so here we go again, the hope one of many mini holidays away for me this year. but this was maybe the repeat of last year except for more fun and time. Sure I forgot a lot of things and some missing pieces but it was a good hopefully start. the vlog is below


A hectic final day of prep, sure I worked most of it, hard drives failed and also bring more ruthless on how things go. I was making sure things are ready. like glass charged, power banks, money topped up and even voicemail settings sorted out.


Then I got home and it was a case of making business cards up and packing the suitcase and also the dramatic episode of game of thrones. a read she's to my eye which was deep and also there was no need to kill the city. but I did have a nice tea too.


Then I was chatting to S and a new girl that I might be meeting up with on Saturday, only she messaged me on Sunday while in the garden centre and we chatted and said yes to a meal really quickly so that's a bonus, she's not my dream size at all but that isn't important  since I'll have a thick time on Saturday with some lovely madames. Then I had the shave, to get the brows off, beard and even teeth to clean. a few people were in the stream and it turned out nicely too. But then I had Lewis and Elly message me at that was some weird moment of truth for some reason. but that iPhone was sure the way to go. Eventually, I had to sleep after fapping at 2am.


Well, I woke up and started the vlog at 6:10. then a quick fap before up at 6:30 and changed and last minute pack. Then by 7, I was off to get the bus. Then we got there and chatted before the bus arrives at 7:07 and I got out to greet it and chatted to a customer of mine to then chat to a friend of mine after getting up top and paying £5.20 for a single.


Both I and the friend caught up and enjoyed talking and then the bus was slowing down, picking up kids and a very tight squeeze in time to get food and the cable, well if I did I was out of luck to get the coach. but I got there in the end


I scanned the code and got on. they did the luggage and I found a seat. maybe a similar side like last time BUT these coaches didn't have mains in them, that made it a tricky annoyance, to say the least.
Then I went to the toilet and boy it was a bumpy way. I was holding it and still nearly slipped but I got it done and now back to the seat to get editing on a slush puppy review. 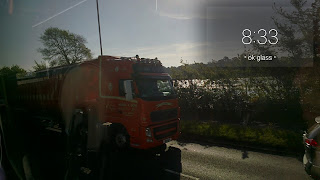 Eventually, I got to Exeter which was nice on the workaround layout, which I made the effort to actually finish the video using the two batteries I had for the laptops. Sure I had to now upload if when I get into the Airbnb. sure I got a message from my host to say if I let her know I can get picked up but I fancy running with glass this time :)


Then the ride continued on, passing forest and Somerset and getting to the big B. Christea was doing okay but had a nightmare day, S was sleeping so couldn't chat to her, both batteries were dying and I did have ONE customer call me so far. And had to call Sony rep for a crash order.


Then by 11:15 I was on the M4, which means it was 3 hours to go until I finally arrive in the Big City. I decided to check on a colleague to see how he was getting on as well.


I text him and then had one more phone call before uploading some of the pics and even a mini live stream, since going to the up made the coach WiFi work, that wax after another quick toilet break and also the chance to have the drivers swap seats at the service station near Chippenham.
Then we carried on and let the phone charge up as well as a power bank since I might need it for glass, although I missed out on the headset piece so I could not get that to let my phone calls. A guy from plym messages me on feabie too, asking which coach I was on. which national express is always good for me.

Time passed and before I knew it, I was at Heathrow by 1:15. that felt progressive and even Heathrow was busy, the sky was hazy from the aeroplanes, the temperature was snuggly and I was feeling awake, only 2 mini spoons of regen kept me going, I was feeling happy.


But I decided to organise my shit together and plan what I need to order. which was the iPhone case and cable which I could NOT leave London without it. Also, I need to pick up the tube money and if burger king had it, a Fanta frozen. But I did the reminder. The phone was nicely happy at 94% and the iPhone was 95% on aeroplane mode. The last leg of the bounty was a tourist route, funnily enough, passing Hyde Park and also passing through tourist places.

I eventually get off at Victoria's, with only minutes before the arrived time and actually what comes up is a mobile shop so the cable and case are paid for, a nice £15 Total. I also ask the guy about OTG cables and he was stumped. but he got there in the end.

I also manage to get done the fun things in life and then got to another phone shop, he sold me a lightning OTG, cable and screen protector for £18 which is a bargain in a way.

Then my EA rep called and well she was going through deals but of course, I'm busy haha. I eventually got my way to Euston via lofts and dragging cases around, that £15 top up should have done the trick and then spent £2.40 for it. The underground is tricky for the suitcase I will admit


Well, I got to editing and upstairs to the main area. then the virgin area and checked tickets, Christ £33 for a return. no fuck that I used the website and got an e-ticket for £24.60 which is a £9 saving. that was fun due to passwords but all done now and paid for.


Then I explored Euston's upstairs before asking about the burger king Fanta Frozen, they were confused except one rep said nope and shook heads. Then I got to the fun of running to platform 2, QR screenshots work so nicely and got to the train but it was PACKED. like I'm standing in the corridor to type this up sadly.


I finally got there by 4:15 and walked out and had to show the rep the screenshot since scanners were playing up, so I was a free man and then had to look for the coach stop, which luckily I had spare time for the coach.

So I popped into z sip and got an amazing deal for £1.39 for egg and bacon Sandwich and a drink. the drink is tasty and we'll I think I was on time since the coach turned up and I got on it. 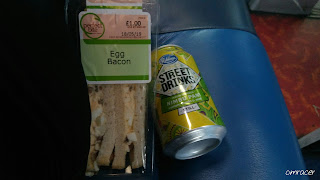 Then I managed to put the suitcase in and paid £6.40 single (up by £0.40 compared to last year. Then I happily sat and let the coach flow.

But then it was a massive Queue on the dual carriageway, which meant some delays but now I have just legs to go. I was not too fussy about that and had a sandwich to eat there as a reward. Eventually, I got to Buckingham by 4:58 or so.


Now things were about to go for the hardest, hot weather once again. And that means running around to the Airbnb, now I know my way this time and it was sure to be a sweat run and a half. But we passed the sights, a subway was in Buckingham too which tempted me and also thinking of that can made me push to run. BUT my colleague gave me catchup which was nice as well. Most of the jobs he had to sort were sorted and sold a few things, but after that, it was the run that would nearly kill glass for me when I didn't realise it. Lovely views though.


So I got to the Airbnb by 6:05 or so and then had to unpack and settle down and was catching up with the lovely host. Since she had the SD card eaten from last year, I gave her another 16GB, considering its costing me £2.50 from the supplier I'm seeing tomorrow, its a here of there gesture so WELL worth the effort and she wants me to have a look at her camera in the wildlife shed too at one point tomorrow.

Then I had to have a shower and sure the guided tour is tomorrow but I struggled on how to use it, it was a nightmare and too hot, too cold and always between too fast and very tricky, the screen is cute on it but will I need to read a manual on how to use a shower. Indeed I will do but there isn't one so google will work.

Then once the shower was done, I had to call the family to let them know I'm safe and facetime was always the nightmare in most cases. But eventually, I got the message across and show parents the room, they liked it and dad was nagging if I had tea yet but I only got in 20 minutes before so they shouldn't rush me. Then I had tea and a few snacks mum put in my luggage and topped up on regen, so the video editing could get done. The sandwich was nice and DID Not have butter inside it which was a nice feeling.

Then minus a buzzing sound and the fact GLASS went all different colours due to overuse was insane, it flickered and then yellow and then moisture on the camera as well which you can tell in a few blind pics I had to take on it too. Luckily it's NOT going to plug-in so that saves me on the issues and has a nice cooldown of being off all day. Also, I did find the headset piece so I CAN take calls too. But minus the wifi being a struggle (which is no fault of the lovely host, that's TalkTalk and Openreach for you), I got the video up and blog post typed up mostly. 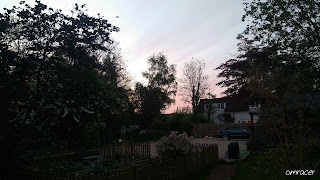 That's all and see you for another hopefully hot plug-in journey.


Labels: #omracersholiday, #throughglass, 2019, akeley, blog, coach, euston, google glass, london, may, omracer, plymouth, silverstone, Travel, tube
Newer Post Older Post Home
Also check out some reviews here
Also something about getting data, texts and phone minutes for nearly nothing (only if you OD on mobile data) and don't mind using the 3 Network is worth a click of FreedomPop