The thrill of a Goose Fair

Well times has caught up and its the end of Goose Fair for Tavistock for yet another year. With that being said, this year has been a good one. Lets start off.

So after a weekend of misery with releasing a gorgeous goddess in my year in Tavi College who i had feelings for or had a cruish on is now pregnant. its just a fucking shame but then again times are heading that way at the moment with various things and the high rate of pregnancy and the media embracing this "Broody" type fucking feelings. I was excited but also nervous on what was going to happen.

But on the sunday, i decided to go for a bike ride to plymouth. Nothing much happened but heres some of the pics of what happened along the way. 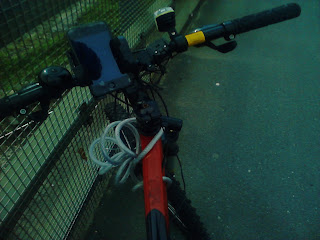 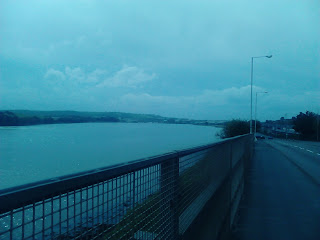 Now the Tuesday was a nice day. For the day i decided to head off to my grandmother's for some lunch and to spend some time with them. It was alright for the most part. Having various chats, teaching my grandad about various things and cleaning up his Documents folder on his laptop. My lunch on that day was my usual Sausages, beans, ketchup but instead of chips it was potatos that tasted the same :)

Then on the evening, after playing some Tokyo Jungle, which acutally is a pretty amazing game and concept and very cute too. Like one of the costumes i outfitted on my alley cat below:
I decided to head out to the fair. Now i wasn't planning on doing a vlog however when i recently bought a new phone (an Sony Erricson Xperia Tipo) it had the blogtv broadcaster app running pretty amazingly on it, so i did a quick vlog of the night which features some mates of mine...i think ?

Below is some of the pics of that night of the rides in action :) 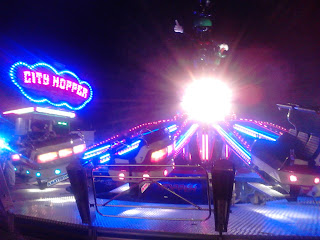 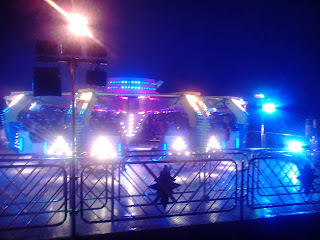 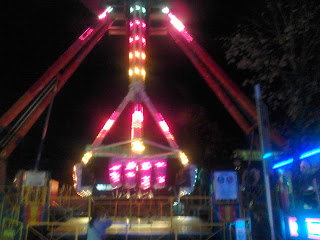 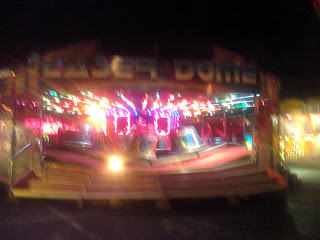 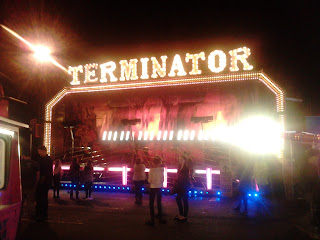 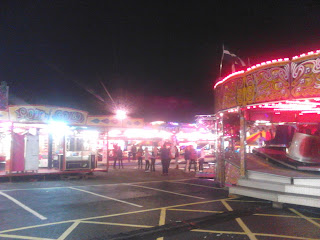 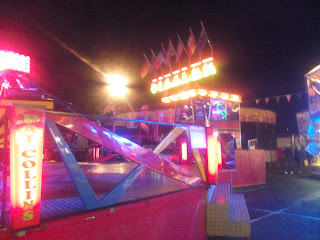 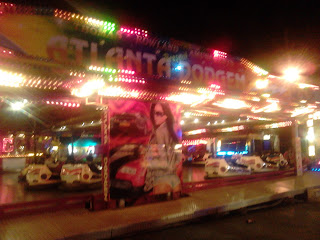 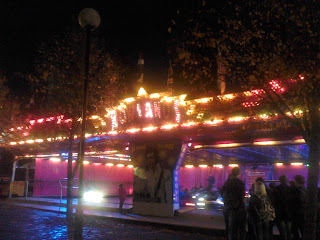 Well then the acutal day happend, its Wednesday the 10th of October. I was awake the usual time of about 9:20am or so and after having a shower, getting chnaged and freshened up as they say, i headed out down to  the town at about 10:50am. Then walking around the stalls on my way down to the square, while popping in to see my mum at her work along the way. Then the vlog was started and that was pretty much the rest of the morning. Here it is below:

Then it was about 1pm. I got home and started video editing all of the footage of the daytime vlog which arrived out at justr over 43 minutes long. The vlog ended up at 39 minutes so alot of trimming was involved, along with cropping. Before i editied the vlog though, i bought my lunch from one of the burger vans nearer Drake's Statue. Along with adding some of my own extras to it such as ham, chocolate biscuits and ketchuip. It cost me 7.00 for the 1/2lb burger and the chips, which is a bit steep but it was tasty :)

After that, it was about 6pm and i headed out down to the fair for the evening. The traders were still going strong and it was much busier than it was during the day. I did take a few more pics of the ride at various times of the evening, you can see them below: 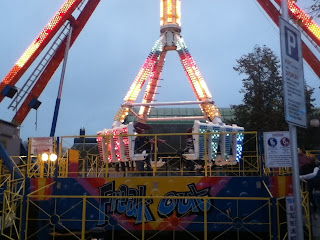 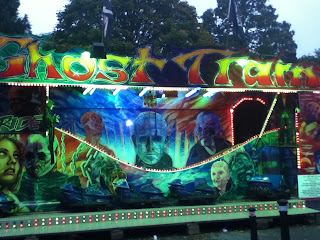 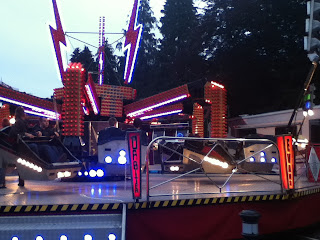 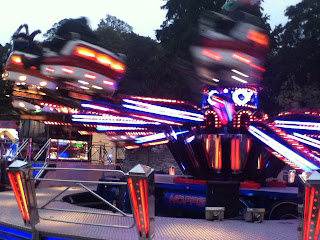 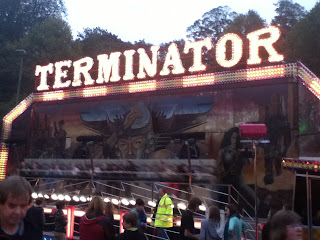 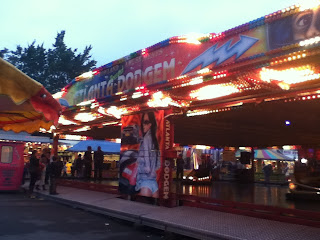 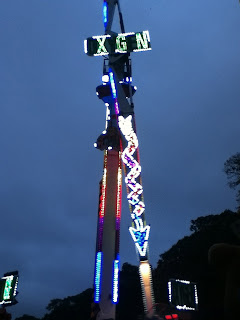 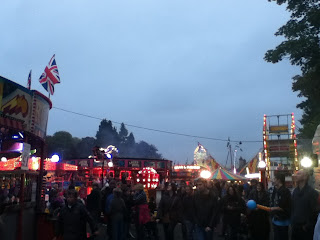 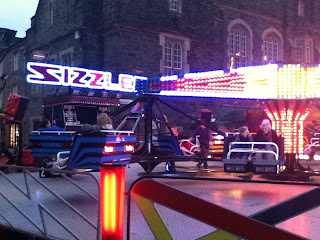 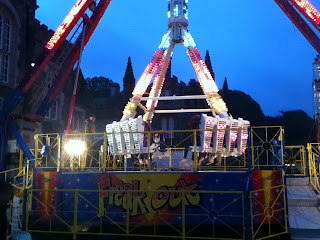 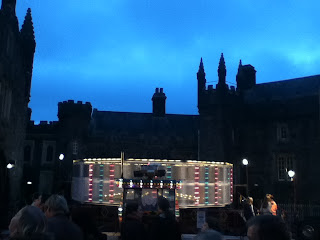 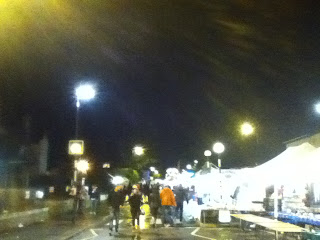 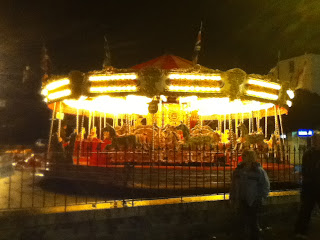 Then while looking for noodles to buy for my tea, i bumped into two girls i met on a Bank Holiday night out, in Plymouth once. Charlotte and Claudia :), so i stuck with them for the most part of the night, including showing them the jacket potato food van and tubs of sweets for £1 along with slush puppies/squishes for £1, which Myself and Char had one. Hers was a red bull. Mine however was a overfill of raspberry and strawberry as seen below, it was very tasty and lasted me an hour or so :) 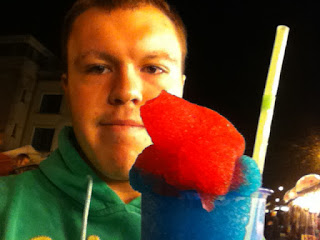 But during parts of hangig out with them along with before, the vlog for the night fills the gap as they say. it includes the slush puppy and you see my tounge go blue. Along with me buying 10 packets of various flavour incenses :) See the vlog below if you haven't already:

Well that was that, i got home about 9:57 and had a bath and then was watching some South Park on Viva while eating my tea i bought earlier that night, a portion of crispy seaweed for only £2.80. Oh and the 10 boxes of incense for £10 is shown below too :)

Now the Thursday and Friday, it was just two busy days at work and also rying to get the vlogs uploaded and editied, well as in upload the daytime vlog which was about 6 hours and while that was happeneing, i was editing the night vlog, i think i got to sleep about 2am on Friday morning when the vlog was finally uploaded and processed. For saturday morning, the night vlog was up at about 0:30am. But it was quite we during the thursday and to dry my soaked socks up. i found a clever way as shown below :D


Now the Satuirday. It was quite a byusy day in work, especially with me and my colleague taking care of the whole shop for Friday AND Saturday, but it was quiet at some points. My lunch for that day was quite later than usual and cost me £0.93, and an hour before i left work to get home, my jeans ripped. that makes it two pairs in less than 6 months :(


Now for the evening. It was quite clear for some of it, i had a bath about 6:30 and headed out at 7:45 but before i went down, i borrowed my dad's DLSR camera to take some long disance views of the fair from a popular viewpoint of Tavi i run past sometimes, you can see some of the shots below, they are not the best since my hands were shakey :( 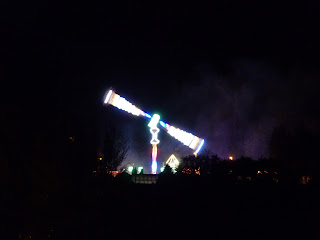 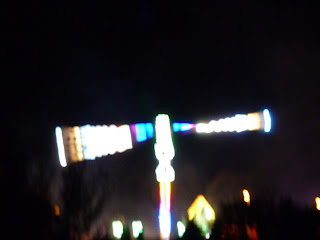 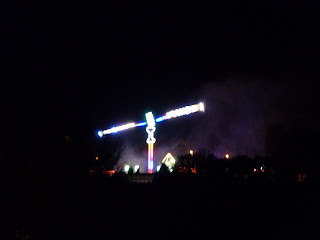 Well after i put the camera back and copied the photos and a short video clip (which i'll use for "Check out other vlogs below" clips at the end of some videos) i headed off down to the fair. Below is coverage of what mostly happened that night:

Then while i headed out to a mates house, i chatted for a bit, while the other chap was smoking some weed. I also tasted some Niknaks which were Scampi and Lemon flavour which tasted quite nice but wasn't a strong flavour. After this i headed off home and made myself a sandwich while watching TV, this was about 11:30pm mind you and there wasn't much good content on TV either :( 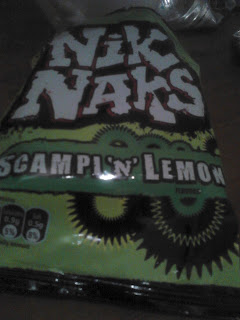 If you want a shoutout, if you like one of my Facebook posts or RT one of my tweets saying "Llike for a shoutout" or PM me on FB or DM me on Twitter for one and i will add you to a list. If you want me to say anything spefific, let me know in a PM or DM so i can added it to your name.


Apart from that, ill see you for the next blog post which maybe a month or so or later. Depends on anything i need to talk about.