Sometimes, things just happen and really, they get to a point of stress and well when life really hits you, not more emotion but more when work feels like, but well, 3 weeks of November feels along time and also it can make things worse with one of the biggest releases of the world this year which work did have a part of that.

But this is where things start. With the day after this typed up, The UK was announcing another lockdown, which was from Thursday (bonfire night is, of course, the way this works), but we have to consider that normally it would be the Sunday off to take, but sadly it was having to cain work for the last 4 days before organizing things and making things prepared for the time of having to make a click and collect work and making it to an office for work. but the past 4 days before it works to be a lockdown. Plus there was an encounter with a catfish which doesn't surprise me.


A late night snack for a ham gherkin and peanut butter sandwich pic.twitter.com/RElbi7F81F


It was planning what i wanted to achieve which then came to Thursday. Which was starting to edge out of walking to the vets for the checkup.

That also lead me to purchase a heat gun for repairs later on as well, which funnily enough, only lasted a week but that is beside the point, also it was coming close to me and mum helping with a bit of bookcase to move in with since well more stock needed.  But it was close to also having to have more snacks and also trying that new old el Passo burrito pocket thingy.

Then it was finally more time to get things organized, which first we check with that emotional feeling of a month of closing on top which did mean cutting things off for a bit, but well that sometimes has to happen. Oh and some work issue meant using a laptop as a till was not going to happen. Which is a waste of £30 a month I need to stop soon.
But then it was the weekend and well actually, I had a review to film, which was on the best page of new earphones, well from Mixx. Which actually have been sold and minus storms later on to cope with, there has been no issue with them at all. All working as they should be and not many ears falling out or even issues with the mic. But more organizing for the shop as well. 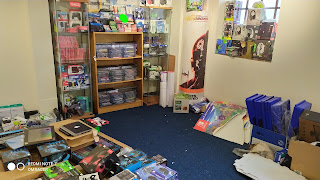 Which for the UK based on they turned out really well and luckily they are in for customers if they want some too.


Which then the day after that was when it was put to the test, since work at a fair amount of visits and well luckily one cancelled halfway so one less to visit, but still, it was not every day that I learned the night was closing in quicker than it had been known to be. From the Rain on remembrance to the face of a busy road was quieter than ever, it felt strange but also soon it would be a remember due to a new challenge to cycle to oke one day, like last year I was close to with this cute girl on Kik and FF but she was down for a holiday, but like my luck, no effort was made.

As that visit ended, Realising it was going to be too late, I was then cycling in almost darkness, but thank lucky I did bring a bright torch with me since my adrenaline was high and well that risk I could die was closer but also lockdown means some less traffic.

Which then it was time to finally have a day off, like incredibly have a day off to not go out or work and well, it felt nice to catch up and especially with the supposed launch of the Xbox next-gen, I should be preparing for that, but that's a different story of 4 weeks of no being able to speak to the reps at work. Which some customers have been pleading for Xbox Series X and Eventually I'll have to chase it down. But soon it was time for my boots to shake and my tension of lockdown to go seriously high. Even with the happiness of the Double Big Mac, I was still on edge. Parents were worried and someone else was a bit worried as well
Which we lead to that day and first it comes to some letters of the government about bills, which is fair and steps get there, but then it was later on like 1 hour and cops arrive to visit me to say "There have been reports you are open" and I explain its click and collect, with the curtains shut, tables boarded off to so no one could easily get further than the way the door opens. But after a discussion, they left and I was waiting to hear feedback but I've not had any so it seems okay but the nerves kicked me in for the rest of the week and well it puts you in a feeling the world is going against me in working wise, well not world, the UK gov.
But it also comes at a price since, with #lockdown2, I decided to get an SSD for the 6 Pro e5100. Which that actually shows a much more performance impact on it with day to day usage. It was great but all great things in an edge come at a cost, one that made me feel lost. But live while we can is the saying, isn't it?  But with this, it was a chance to be some Netflix binging with Daredevil and the rest of the Marvel bits.

Which then it was still time to focus on work and well it was important to shut things off which makes it easier, plus the second job was supposed to do a bonus, but well that was not going as I planned. But sometimes we forget where the time goes and work is work. But that paid a price, Even if it was Saturday when things would hit up a notch. I mean not too bad, but maybe rushing for deliveries at the post office depot and well even more passing in the dark.
Then it was time to really hit the time with another visit again.

But then it was my first Sunday off which was sadly the time to say RIP to the 6pro, since with no shine of light, well minus the Power one that happens when you plug it in, which that made me really lose why I was trying to keep going, okay well a bit it was a waste of a whole day which made things so hard, okay There was also more stress at bay which the Bike had YET ANother flat tire, on the front this time.

Which as more bad things go, it takes it out of control, Since due to the tire, it was a living disaster, so I cycled to the edge of the street and then it was time to really push it, So welcome the 12 hour day of running and visits which it did work out in the end by fuck fuck fuck ow, sweat, and then a WASP STUNG ME during the second run which was 1 hour long like this was on the back road to chillaton and a wasp just lies on my sock and happy, and I'm nearly limping for another 1 hour 20 minutes in near light rain conditions, which then it leads to me having to deal with more of working on that and sadly, that had consequences for my foot.

Now on this night, there was a Post on FB from Channel 4 about naked attraction and it really got to me on how people still think not understanding that it's not easy to be understanding from how opposites make sense and also sex is not just a natural thing to some minds. Maybe this year I've learned that sex isn't something to want even if it makes you feel like the train for your progress in life has left hours or years ago. 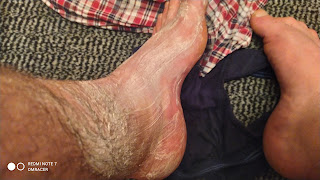 Which then it was the start of the week of the PS5, the big timings, repairs to finalize, and also 3 weeks for a PC to be built due to a case still not arriving. Sure Twitch had some new features I could use in the long run but it was soon to be deliveries for the Crown jewel in gaming right now, and well all 4 sold, 2 of them via Twitter DMs. But the Delivery for them arrived, the Foot was getting into agony from the sting and well more co-op bargains. But the second job was on my mind to really think about how this year might end better, how saving up might be more important for the plans next year.

Also, I and someone was going really well, since me and she had a heart to heart and well it means that my feelings are realizing a lot since this week was the year-ago of that last holiday which we met. And it made me realize how things have been. I mean it made me really feel shakey since this year has been distant, I've felt sometimes a lot of guilt and at the same. But well memories are sometimes there for us.  Also for the first time, I managed to help cook Crispy seaweed after chatting to sugerwater about it when she put it on her IG Story, I mean the recipe is used was similar in the end, but too much Chinese 5 spice and salt for only 200G of Kale.

As the days went on, work was climaxing in some ways, consoles selling, questions answered, Netflix binging and also reminding myself of the past year and knowing how much I've changed in some ways and the same in others. But it was also looking like the final day of me making sure repairs are not offered, well visits only minus sadly some days I had to do since well for me this week didn't feel right being in work and well some things have to be closed up.

Now it was finally the Sunday, after another $100 on the second job and chatting in the morning after a Netflix bit of watching, I finally got up and had a shower which that is normally more of a twice-monthly occurrence. But needed it and a well-done shave, since well getting hairy means bad luck sometimes, and it was also off to have lunch with the family since a support bubble is justified in this and well some people die without support. That and well I was wanting to see grandparents before this but time does not play on my side. But in the rain, we went and it was one lush roast before some issues with Printers and screen mirroring to sort out. But the Foot is all better, minus one little spot on it.


Now then we got home about 4:30 ish and then it was a cold walk with Rosie in the local field, with chatter and things too especially with the last week of national restrictions as well. But goals, well there is no chance of those happening just yet,. But other goals look like there is a chance but we can find out soon enough.
For now, we can try to live and make peace.
omracer

Labels: #lockdown2020, #nationalrestrictions November, 2020, bike, blog, cops, feelings, food, omracer, Review, run, Weather, work
Newer Posts Older Posts Home
Subscribe to: Posts (Atom)
Also check out some reviews here
Also something about getting data, texts and phone minutes for nearly nothing (only if you OD on mobile data) and don't mind using the 3 Network is worth a click of FreedomPop