Well August is halfway there already and let's bee honest
This had been an emotional few weeks of closure and planning special meetups but sadly that has now lost that chance of those. I'll explain later. But for now its the fireworks again so let's enjoy this sun that appears.

Let's explain. Well, I cant since i got a message telling me not to mention anything.
But that and there were meetups which failed before I even knew that amazing girl which sadly the first week in August was just passing by and a promise not kept. That and I didn't realise until later chances with someone was going to get amazing.
Another girl on insta and I got chatting and we were thinking of meeting up but since she was unsure about things she passed up the offer. Even the video calling when eating doughnuts option was not her thing.
The amazing girl had her birthday last weekend and I did get her some Greggs and even a pizza hut cookie dough deal and maybe ill get the chance to meet up with her this year again. Still the first girl I've ever met up with from online feeding.
work had been chaotic and mostly solo but this starts to end up having my possibly only non-Sunday day off in August tomorrow wince it helps get the blog up and also a wedding to dogsit while it happens :)

But now it was time to have the fireworks start.

Well I got up about 9 and I got up and changed before going to work
I did drink regen forced energy and focus today and then got in and things to get going but after customers old bosses and also the girl on insta passing up the unit offers. It was time to leave at 4:45.

I ran from work home. Bubble wrap in the hole of my ripped jeans but sadly it didn't help and still got chib rub. S was a bit worried when I told her it to bless when I squeezed it like a pinch and then chatted when checking mail and posting to Facebook a work page that I will not be in tomorrow and phone screens from twiggtech are delayed. Like its a pain but money can't be blown since bills next week.

Eventually by 5:51 I was running to the bus stop and waited for the bus. The sun was out and felt happy for it. Eventually, the bus turned up and £5.80 for a dayrider plus now. I did drink regen before I left so I have extra energy and 2 teaspoons (well one morning, One now) helped me get the energy and maybe even to edit nicely tomorrow.


Then It was a peaceful ride on top. View of sun and blue sky and also the bus was getting busier by the time we got to Derriford. The redmi 4 was on 80% battery from 100% when I woke up. The glass had powers and cable in case I needed it as well. But hopefully, something good wax to come up.


As I was nearing town. Chirstea text me and we chatted for a bit. Turn an out she was really full from the cookie dough I got her for her birthday and always sleeps but she craves it. Like mauve of makes me realise I think she's the one. Bt she showed me her cute belly hang which I was impressed and had to be said that I helped male that happens
The bit I then got to town

I got into the casino and greeted by the lovely lady at the desk. I swiped on the entrance and walked up. It was quiet and will I was texting her even when I was going toilet but she was shocked in not home but I'm gonna be a dick later 😂. But then I washed hands and went to the roulette table to think about trying my lick but I didn't feel it was the right thing to do but I left there anyway, Then I ran my way to the Barbican

The evening run and barbican


Well, I started just after seeing the messenger still crawling by, I mean my way to the Barbican and it was a nice run. The crowds were not hectic but then again it was all to the hoe as well. But we decided to take a walk to the barbican and then it was lovely.


As I browsed it was crowds, orchestras and good food
Tempted by cap n jaspers was fair but busy so I walked to the hoe.


As I walked near the stand of where the mayflower was and I went to the little plaza and then to the Cafe at the end. This was great buy it was I noticed an empty table with two doughnuts just there, empty table and cups and two sugar doughnuts and then I wondered and soon I "Tidied up" and took the donors. No one batted an eyelid so it just of been just to bin anyway...
Insert Pics here
They were good donuts and I really did feel the size and just left there was so rare. Bit then I walked my way to the hoe


Now time to explore the Fair.


Now the fair was here and not as much as i expected compared go last year. But more of the extreme tall rides like Bungie and Atomosfear.

There was even 2kg chocolate roulette here which tempted me but I then still explored. Glass was feeling better I think. But the wonders of food was still there and even went to wet wok as well. There was tempting but I know I will have a Date there one day. I met some customers on the way there and exploring the area too.

Then I wondered back to different places the fair. Alsmpg eating on chocolate roulette but I decided on if I should try it on the way back home since its a rigged but I also found out the cost of the chocolates later on. By 9 I was heading to my usual viewpoint for the fireworks.


Then typing this up and opening up was a good thing bit 9:30 and the display began.

There was a lot of bangs on that one of was cool bug also apocalyptic feeling as well.

I also had to reboot the phone when doing that since it was playing up and I also snapchatted the local lady e if I could visit and pop by. If that happens then I could break the ice and it would make the effort. 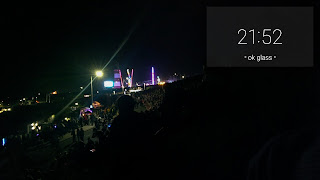 Then the second one

This one started about 9:55 and was a nice middle one of the smiley faces and others and I got a reply which meant I was about to make dreams true. But then it was the third one


A mix of bright and loud and also the anticipation of the meetup and also a special treat for myself when I get home. Bit it was finally nice and actually then time to run.

The run To the dream

So it ended and then I snapchatted the local lady I was on my way and then it was okay with her since she had to wait for some things from a mate. So the run began and the crowds hectic but I made it to hers in about 12 minutes

Then I saw her. Wide black chillout until I walked closer than she invited me to the entrance of the flat and we chatted. She is definitely a dream size and lovely girl as well. We talked about w shakes since she ordered some in (for housemate ) and also she said we can start to do more things now it's broken the ice.

This is a good change and finally something real in the pipeline. Soon I can take more days off go see her. Bit by 10 to I left and we hugged. Well, I could just about hug her. Plus she liked my hair brown bit have I light lighter it or new colour soon.

THE RUN AND DOUG MATE CATCHUP


Well. Running up the hill isn't that bad but it's about 6 minutes up that hill and down to Mutley. Eventual I got to the pizza hut. Now I walked in the wrong door and then got in the right one. I could have collected a free pizza since the rep said ”mat?” I said ”yep but I'mhete to order”. So he put it back and then went to let me order. I asked ”is still 2 for £8 on the cookie dough,” he said yup bit I wasn't hungry so I only offered the white chocolate and caramel cookie dough got £4.45 since he gave me £0.55 change since he was out of £0.01 so bargain.

I waited and then he gave me the ice cream in a tub then cookie dough and I rushed out after thanking them twice. As I blogged my way out of there. I saw Pete and we caught up and chatted while waiting for the bus. Soon one arrived and he made a hand symbol to show other bus was on the way and then by 11:30 another one turned up.


It was good going through the past few months with Pete and he enjoyed his holiday too and did offer me a sofa if the bus never turned up. Then the cookie dough in the hoodie per and then made my way on it. Got upstairs and typed this up as I was on the way home.


It was nice to listen to some cute couple who I think knew me but not sure. Then it was near Yelverton by midnight though I said to myself that it's a good start.
Eventually, I get off the bus and it's time I head home.
Sure I have time to video edit and things and get this mostly typed up ad well but also I have to now save up for what I want to get done and potential being the IRL feeder I was meant to be (if you listen to the music in the vlog you get that reference ).
And then I finally had the cookie dough before I got this up for the typing and go male sure and boy that was so good and even on the bus it was warm too.


Well, hopefully, this means the blog posts will be more now. VBlogs not so much but I can work around this life now. But see you soon
omracer