Well, my energy is pretty stoked and trust me, things have been productive and good karma in my life and work troubles with headsets. Oh such fun, but seriously, it's Goose Fair week already. The vlog is below, very odd it decides to go and have sync issues, maybe the redmi 4 is starting to strain from the needs of my life.

Actually it felt normal, I ran to work late after a a fap over someone I was supposed to be buying food for but since she's hardly on feabie, I gave her my number instead, considering that's thee 4th girl I've given my WhatsApps to and 3rd I've bought food for, this is looking like a long term goals is getting sorted.But after turning down a supplier and also having to negotiate on black ops , actually that's tomorrow due to some new street break, but regardless, it's a good plan and posting 2 boxes off which are returns on headsets and a screen that doesn't fit. Well it went okay. But I did see dodgems as I ran down to work this morning or more of the fair setup.Then it was time to head back home, I decide to head home with mum and walk with her, so I got to hers at 4:55.

The fair was clearly  right setup now, like stalls were really starting to drive in, but well, we walked back up West Street, passing a couple of shops and ordered a dog tag off a nice shop owner I used to have as a customer.

But then we chatted about work and also the sun was hot but glaring very low and we then managed to get home and have a Chit chat with the neighbour about their kerb which was being bulldozed opposite us. But then we got in and I caugjt up on some uploading and chatting to a lady on Kik who's a dream feedee but more in a relationship for the past year this week, she's short and huge but does like being fed but not wanting to gain currently.That and chatting to a new Snapchat buddy who's also gothiccy dream and loves her fat and knows I love it too. Like it's been 2 weeks daily chatter, it's blessed, I will met up with her one day if my other love goals closer to home are a bust.


Now it was some uploading to do and also managed to she a classic ham egg chips for ctea as well, it was nice but might of overdid the picked and also was getting excited for this as well.


Then I was chatting and checking before getting changed to run down to the, fair, I left at 7:10 and it was then time to run in the not as cold as I  though it was going to feel and saw the fair.


I ran down the hill and passing crowds, I got to he meadows and started blogging, deciding it was time to use a install filter too.

I vlogged and caught up about a recent crisis I've and the house helped swaggy out with, say what you like but he's helped my life more than many others have, even if he was blasted on TV about it. But I walked in to see the fair is yet again closed by half, so it's shrinking ever still, a shame but that's the economy for us all 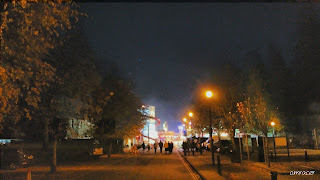 I then explored and saw rides like dangerzone, tagada, typhoon, Freddy's revenge and even a sizzler in the middle, a mixed range to say the least.


More prize stalls this year too, that was nicer and maybe those plushies I could win one day for a girl but we shall see for now. And seeing no one I knew but different shapes and styles everywhere. Then by 7:36, I walked on to the square to see the prep


Times are hard and we'll things are always going to be different with how much goes into seeing how this fair day is achieved, well it's alot of man power to say the least, all genders helping and even bridge lights


Then I walked my way back up the main Street towards the fairground. It was getting pretty packed, auctioneers, donut stalls, Thai, sauces and even the arcade as I past a customer I sold a game too said hi and chatted. I walked on and got to the bus station, now this was interesting when no carousel galloping horses arrived but another sizzler, making it 3 on the day, wow.


Then I explored the fair again and not much different, danger zone was pretty fast and also some kids were esctatic about winning out if a crane, but alas it was time to walk back the small path and on my way back home via all the vans. I walked up the road, so many new stalls from a customer lollipop statue to led candy floss signs, and gypsies alike. But it was going to look more unique with different things towards the top or the Westside of it. Which is where I made my leave to go to spar


Then I made it to spar to have a browse, it was busy but actually no way that busy normally, but some deals like mini Butterfinger cups and other sweets. But alas I made my leave and ran home. I got home by about 8:15 and it was a good show of that was to happen on this busy day of the year. Which I can't wait to show you then