Well, it's the day of the date and also the day the weather is going to port quality. but this time we finally have my 5th date and so much to feed and eat and chat to. the vlog is below

my eye wakes up at 7:00am, the legs were tired and we'll, the body felt shattered but the mind needed gm the bog that stuff is done before this day begins. I finally got up at that time and started to get the trailer made for the previous vlog.  Chatted to swaggy and the house and we'll then it was shower and packing up to make it work.


The shower was nice and good at 39C with little issues to deal with and that good old fact of making sure I was tidy before leaving g. I did text christea as well go say about our plans and later that changed for the better. But then if wax to make the bed and have a good old mini tidy up before getting out of that Airbnb. Chatting to the host and putting the good record in the book is always a  cute way. Also, I got rid of some Asus merch as little gestures  The water bottle that freezes and refills too. But i found out that buzzing sound is from a rare type of BEE which they eventually just move on to place to place. Nothing to worry about there.

Then I had to drink gfuel but had a call from christea to hear some new and that she couldn't do the evening due to the family but could do afternoon which is what I wanted originally. so after talking. she's picking me up from Collingdale at 1ish so I don't have to go anywhere but Euston for it which is amazing tbh.


Then I packed up and wheeled out and said goodbye and picked up the other laptop since I left it outside to get the trailer uploaded which it did not leg me.


This was a painstaking bad run, it took me nearly 40minutss to get to just an estate bear the bus station. cars passing, wheels falling off the suitcase and even colleague ringing up for not pulling the machine.

After another few minutes wait, it was £6.40 for that single and a misty ride to Milton Keynes.


The trespass of delays


I got to Milton Keyes and ran in, scanned the QR code then rushed in the lift to platform 5 to get the train. I eventually got on and well it turns out someone trespassed in the line but didn't die. so it was a case of waiting for a bit.

We got told that we had to switch change and that was a rush to platform 4 and luckily it worked. I had to stand on this carriage to get on but a whole range of lovely people here. I called nan to let her know in on my way to London. Bluetooth headset with glass is actually useful and well it was not that far until we made it into the big E. I did text christea to make sure I was on my way and safe and sound. I was mega excited even if I was annoyed about the hypertec leaking, the wheel falling off the suitcase,  even with the battery life of my phone going down from 92 to 83 in less than 2 hours and well just the mini inconvenience and things.


eventually, I got to Euston by 12:09 and then message the Airbnb rep to say I will be there by 5 or so sense of the date. Euston looked nice and I got out and the lift to the right northern line to see her at Colindale. I text her to say I'm on my way then called her

The loft to the tube was not that bad, a few waits for the Edgware tube and I was set. I did drink the rest of the gfuel and heart was slightly higher than usual. But then  I got on the tube and sat down while hoping to enjoy the fun time with a growing girl. 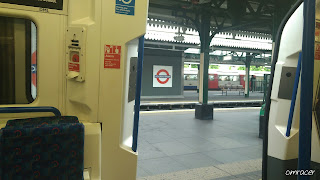 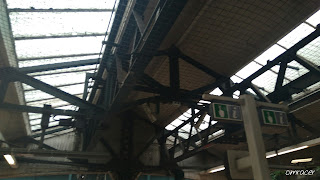 It was only another 15 or so minutes to go. Luckily it's Bank when I get back on the tube to island gardens. Really I did book quite far out but to get this done and save money, it's worth it :)...


So I got there and waited for about half an hour. I did walk to near bang bang and then she called me as well as a customer did, I dragged myself up to. The Taco Bell is soo tempting and smelt so good.


Then she called and told me her car and shortly after, I finally hugged her and she is much more my type than I was expecting, lovely accent, posh car and we definitely chatted and it felt lovely.

So we had to do a diversion after we got in the car. She needs some cigs so Morrisons was perfect for parking up and then Bang Bang it was. it is a peng foosball with buzzers and a nice relaxed feeling.


We firstly looked at dumpling, soft fluffy cakes, mango and so much more. Then we looked and she saw the one she wanted which was prawn in black bean sauce and then the fun begins when I ordered salt and pepper squid. She ordered from another one with spicy vegetable dumplings. it did look nice. It must have been £24 on her so far.


We then are and chatting, I didn't get to feed her but she was starting to feel stuffed and we also tried each other's food.

Then it was nearing 2:45 and we decided to drive to her local creams. That was much easier and what she wanted which creams I've ordered for her on Uber eats several times. The excitement for her was insane and thus was her Second dinner. We chatted about everything, from Chloe stand g me up, her work since we did park up and did some work for her boss via an email and also chatted to Lewis on her car phone, well if it wasn't for him, I would not be here typing this. We chatted over so much, like she was basically an account manager for Coco cola and travels to shops to help with product marketing, has excel spreadsheets to translate but wanted a work laptop. maybe I will one day sort that out. Passing the A4, various bits and pieces and we'll the chance with more things to get into. it felt great with the music and how Siri was working in her car, 3G was a pain for it I could tell.

Soon after, we eventually drive to creams and pared near scooters, that was £1.30 an hour but worth it for making her happy and then to order the food, well that was a fun twist with getting the order done which a case of writing it down. The Chap that took us to table 19 was really good at telling the rowdy kids to keep it down and eventually kicked them out with other families arrive in. The total for both of us was a whopping £24.50.


She enjoyed it and maybe we stuffed her too much with 3 sorbets, late, milk chocolate utopia and she didn't finish much of the cookie dough, the sorbet did taste lush.

We were chatting as we drove to the high Barent underground and learnt loads more about each other. Which then it was time to leave and say goodbye and I kissed her cheek. it was cute and chubby and I wish I did hug her more. Maybe it might happen soon. Then I was a quick wait in the tube until it goes to the bank. The rep was helpful too.

The Tube to Island Gardens.

It was peaceful really, sure cost me £4.70 to get there BUT was a nice relaxing journey until i got to Bank since changing and stairs.


The Walk to the BNB.

Then it was a case of getting to the lift, a chap in the wheelchair liked glass but never used one in real life, I let him try it and it was great for him to enjoy. But alas I walked out into the Rain and it was nice and fresh and Island Gardens is pretty posh I will admit, the Airbnb was a short left away. I chucked the Creams slush in the bin, cup wise.

I walked for 10 minutes, dragging the suitcase out to the place. It was okay until the STEPS which is a pain but I got up and well, made it.

Then I settled down and everything blew up at once with the Wifi being DECENT even though its Relish aka Three broadband so its 4G mixed upload crap. But hey, it works in a way. But then it was time to get to sleep at 2:35 am after uploading.

Tomorrow seems to be a fun flirting day planned in the evening anyway.


Labels: #omracersholiday, 2019, airbnb, bang bang, cloud, coach, colindale, creams, date, dlr, euston, gfuel, island gardens, may, omracer, running, suitcase, train, tube
Newer Post Older Post Home
Also check out some reviews here
Also something about getting data, texts and phone minutes for nearly nothing (only if you OD on mobile data) and don't mind using the 3 Network is worth a click of FreedomPop