A Wet Shopping by Train

Well, this was not expected, but in ways almost drew lames of and overdue but in another way, it's what cost this was to happen. There might or might not be a vlog about it down below but alot of new things ill admit, this was one week later


So this is going to be the killer, things seem fine for the past week, sure what was meant to be fine was but n Saturday 2 friends got a message which was about me and some major shit-stirring but also with a mix of things only myself and them know, which after and during a family meal on Sunday, has undone the best moments of the past year. But what I will give you is something that well actually ended up more insults to me like words I say to make myself sound like an incel and also there were lies about even who she was except I fed her years ago, like 1 to 2 years ago.

But with that and having to rush payouts and also alot of pay pal drama sorted which some person decided to make a fake Gmail with my name and then used a card and address and actually causes me to have debt collector letters. Now since that happened on the 23/12/19 it was almost a month sorting it and the team at pay pal eventually found out and helped me through it. Minus closing work for a shopping 2 hours to get it sorted. But Wescott did do their best and helped me out a fair bit too.

Now that's out of the way it's the day.

The morning for a visit


I was awake, sure the time was 8:40 and I did confirm a tiny bit with the girl I was seeing which actually is the same as whom I saw in August since it's finally our second meeting and things have changed and okay yes invest but next too.

I got up by 8:45 and cleaned the cat's bin and a phone call from my mum who lost her keys but she got them a showed for me and then it was time to rush and get bits, I didn't have time to take a camera but Phones will do the quality anyway. I started running by 9:13 and got there to the bus stop in 2 minutes, like no way it's much easier to run using the band now, a few taps and im doing a workouts


I got on the bus for a return for £4.20 just in case but I wanted to make sure I can see it through in but by 10:40 I got there. Then I rested by the veranda or the marina bit and vlogged before I went to the customer's house and got what needs to be fine.

I finished about 11:20 and got a text saying about tired and wait until next week which I had this feeling but I replied saying im running to get the train and I ran my way I got there 3 minutes early and the station wifi was handy and worked but not that quick enough to hope for a reply.


The train and run


I got on the train and sat on a comfy part of the train and it's nice and posh compared to when I was on this last, must have been years ago but after paying £5.20 for a single to the station I needed, it ass a peaceful wait and feeling a warm journey to the station

Eventually, by 11:55, I was at the station and since I heard no reply I waited out there for a few minutes for the rain be less heavy. We decided to run from the station to town not that long actually,  about 28 minutes, the mi band was doing really well and only some couple was like "you could look where you're going" just as I stopped by a parked car to let then through cheeky shits. But I got to a wet town and we'll a lot has changed since I've not been around town since really August last year.


So my first port of call was drakes circus to get a toilet break. Now it was nice and also I saw HMV disappear as well as Krispy Kreme. But after I walked out of the toilets, past the 3 stores to look for the redmi note 8. But then it was my way to Taco Bell and I saw The Krispy Kreme where the pretzels we originally. Then I went in to game for a quick check and it was a season of sonic sale on too.

Now taco bell did have a nice smell simile to what I felt in Colindale and it was nice the menu sad write responsive and you can remove the cheese from the meals which were nice. Then I walked down to game which had some event on so if was close for the moment on the gaming side but with the retail side had some moments and good deals and all. Then it was to CEX and as I walked in I saw lu the girl I had my 4th ever date with and she was on the phone but smiled with her rounder self, it's so weird since that nearly 2 years ago that happened. I walked in and looked at some GPU's and also some laptops and switches, not too bad prices to be fair. But after that, it was to pond and.

As I went into Poundland it was not to busy but I found cables I needed and snacks that I might want but I skipped that and made my way to Brandmax. As I made my way there, it was wet and then I got up and looked at some good deal jeans, some like 32" w 34 l jeans for £7.99 which is nicer than the Primark ones. I hesitated on them so I walk on down to explore more. Then it was on to the second Poundland and it was time for some Durex, foot soles and 2 x USB type C cables, well normally they are like £6 so £1 each is awesome value 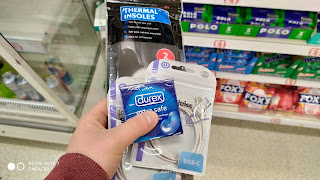 Then I walked my way down to near the market, and one of those repair shops had a screen protector for my note 7 which actually fitted a Huawei P smart 2019, but not for £10 in all honesty. So I walked away and down to wants for the next lot of thing, some GPU's and all. But en I walks out and go to cash converters and some good deals in Xbox one consoles but then I walked my way back up and throw the alleyway by TK max. But as I was here I had a phone call from a customer to cancel the home visit I was meant  have with her on the way back. Then it leads me to the other sidecsbd time to smell the oriental shop and the bags of crispy seaweed were tempting me I will admit. But I walks around and then walked out and upwards to visit the barcode


As I walked out of Primark and down to the steps where the bust station use to be, I walked into an empty carpark well almost empty and ha that new smell with it, it was very odd feeling to walk in there warm sure, but like an abandoned car park, the lift access was quite a way away but I got there and then walked to the gold which was at the bottom right of the place.

I walked in and it was an odd smell but the bad and arcade were closed, so I walked out, I'll do a vlog of that maybe another day. So it was then to explore level 0. I first walked into Cineworld and it felt nice and there was a rep greeting me and helping me with movie choosing or how to use the machine anyway but I then walked out and into Fivd guys, the smell was lush but the value for money was not, my Activision and another publisher rep called me just at the moment and asks if I was in a basketball court, I said no a five guys but then she reminded me of some overdue Tennis order so ill bundle or with some monster trucks game. I walked them to Cosy club which felt nice but the price was steep for brunch parts and more for people that link to drink constantly.

The End of the trip


But alas it was my time for one last l.ook at Taco bell and then Menkind, which had some ideas on things, Like the Megadrive mini, some signs I could use for work and also a kit for vlogging which later on i've managed to get in touch with. But then it was to the Brand max to get some Jeans. Not bad for £7.99.


Then it was a nice walk back up, first off I went to Hosue of Frasier and tried some Dior Sauvage, well it was nice but I don't get the girls chasing down the street meme of it, well not for the £70 Price tag anyway.

I went to the EE store for a little chat about plans then I walked to Royal Parade. Which then was a Sprint for the Bus, and it was then a £5.20 to get back to Tavi. There was still no text at all.


Then I got off the bus to Lidl and it was a Run from there back home. It was dryer but a damp sense in the air. But I got home and then found out since no one has been home, Rosie had messed on the floor, since actually if I just didnt rush to make sure something would happen, I would have been able to walk her and well actually none of what you saw would happen. But this actually has been a shit start to the month but I've got plans to make it work out again. But then it was a nice Beef and Chicken Balti.

Well here we are, I'll try to get more vlogs and videos up and with things to sort out, it will be a delay for that to happen. I'll see you soon.