Well its been a while since i've posted here, although things have been quiet for me, this night was one of the best i've had in a long time and here you can read on many of the details :D.


So this weekend i had the Friday night to myself and this was a chance to get a meal sorted, maybe a date, maybe just with mates. But also there is a new resturant which serves Korean and many other Asian variaties of food like Chinese, Indian, Japanese. Which to be fair are my 3 favourite food cuisines as well as possibly american. Basically i'm talking about SizzAll, which has opened up where Water Dragon use to be. Below is the location of the buffet which has been open for over 2 months now:

Now i left work earlier (about 4:15pm) since i had to do a backup of my Dailymotion Channel which i'm deleting in the next couple of days. So once i started setting that up in jDownloader, i got had a shower, got changed and took all that i needed (phone, ipod, wallet, keys, 2x usb, glasses) and then started to run to the bishopsmead bus stop. I also tried that new Bus app from the First Group  and its ok but needs to be more accessible for customers who don't use internet and/or wifi on their phones. I nearly missed it since my nan called and thought i was having my tea here and i had to rush the call and also i ended up running in front of it, risky but quite a adreneline rush

So i got on the bus, paid £6.20 for a return. Which is quite expensive and also for £0.15 more i could get a day pass which allows unlimited travel, which to be honest its easier to get that than 0.15 less for just a return. Nevertheless i was on the bus, some chavs were opposite and talking about a 3some and buying and smoking weed. Now people i have on FB would use the term "very classy" in a sarcastic manner.


Then i got to Plymouth around 7:15, was quite an amazing journey, well actually it was the same old but beautiful weather, i mean it was a early summer's evening type beautiful weather and it was even warm too. Then i started the vlog.

Now basically i was walking to SizzAll and i noticed that the Apple Store was close to opening. Did you know that if i passed on the interview for a sales rep in Apple then i would be working there soon, but i didn't and got myself a Microsoft certification behind my name instead :D. It also was slightly colder and some stages were being placed by the sundial.


Well i passed them and went to Sizzall. I was only to find that the taxi 7 of the mates that were joining me was waiting for Taxi's and 2 different companies deciding to be annoying and they didn't turn up until 8. So i killed some time in the casino, with playing some rounds of blackjack and not losing money suprisingly, but not winning anything either, after that i waited until their taxi (Starcars 8 seater) arrived

Then we entered, paid £12.60 each. Well this was a good value considering its unlimited refills of various cusines. Drinks however were £1.20 for lime and water, which i think that is expensive compared to even a Nightclub like oceana where that is £0.50. None the less the chinese hostess greeted us and directed us to a table for 8, very kind of her even though Pete said "6 pimps and 2 hoes here" which is quite funny. The vlog carries most of what happened on, and you get to see a glimpse of the food which is just very tasty and not as filling as i would of guessed. Here are both main menus that i ate, i did forget to show the desert except in the vlog. My bad :(.

After that it was some nice fun feeding Muneetha, shes one hot girl and it was fun feeding her nana bread and a pancake, which you can see freshley made in the vlog. Then later on we had a nice peek Eloise feeding her which was i must say, much more fun to watch. You could guess when you hear, "mattie had to stand up, shits going down" :P. That and one of the guys was dared to scoff all on his plate in one spoon, which failed in a funny way haha.
After the meal, we headed outside and we were waiting for Taxis and deciding what to do. It was 10:30pm by this point, so the guys decided to go their seperate ways and i went to another location. But heres a pic of all of us outside SizzAll.

So then it was 10:32, i pelted it to Oceana and got there in 10 minutes, quite good. Then got in and it was not too bad, quite busy in the small WooWoo bar. Met a few girls that knew me, wanted pics with me and i hugged them, some were nice to hug in the curvy sense :) 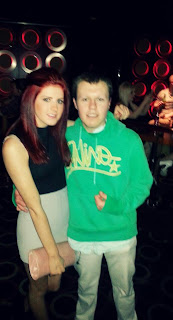 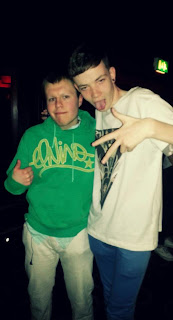 Then it was 11pm and the Dancefloor opened, walking in there and you could smell sweat and maybe tears from a mile away. Quite funny but the music was slightly new and you probably saw the dancing in the vlog. Also i danced with a couple of girls and then a girl i like (charley) texts me asking where i am, then 10 minutes after i meet up with her and hug her and then i danced again then eased off. After that i went to the smoking area to get some air, and also passive smoke, but thats by accident. I chatted to some girls who i danced with and they asked a few things then charley saw me and we chatted and hugged and i even kissed her and she wanted to sort another time out for a meal, maybe just between us :P, but after that, i had to leave and head off to catch the bus.

So after i caught the bus home, i was checking twitter on the way back and then got home about 12:40 and the downloads were nearly done, finished that by one and then getting the vlog clips ready to edit. But for now this is one of the major improvements and another tick checked on things i wanted to get done by the end of the year. Yes the meal wasn't with emma although i did invite her and never got a reply, but for now i can't do anything until the chance arrives or appears of her single, which i do hope is soon.

For now though, i'll leave you with this and i do apologise again for the delay in updating this, i know i should be but i want to post something WORTH reading if that makes anysense :)

See you in the next one
omracer
Labels: 2013, beef, buffet, chinese, clubbing, Dance, feeding, food, friends, fun, girls, indian, mates, night out, oceana, Pancake, plymouth, SizzAll, taxi, vlog
Newer Post Older Post Home
Also check out some reviews here
Also something about getting data, texts and phone minutes for nearly nothing (only if you OD on mobile data) and don't mind using the 3 Network is worth a click of FreedomPop