A Journey Via Rogers Day out

This vlog was one of those stories moments. Okay sure this trio to Plymouth was planned for work since a customer has booked me but it's a change of what happens which really gets things going. Enjoy the vlog below. its probably going to be 2 days late but still an interesting one nonetheless.

I managed to get up pretty early to get ready for this possible long day out. The mist was turning to the sun, I was up earlier and things were raring to go. Eve with a smoothie to gulp down as well.

I eventually get going by 9:55 and it was a bit of a knackering journey to get going and it felt like I was making up a nice bit of time. That was until I got just past the viaduct near magpie at 27 minutes and I felt like I was slowing down. maybe it was diet and old age, but also the chain was looking rusty too.

But I managed to then grind my way up that steep hill before Yelverton and it was then a nice time until someone was calling me and if was hard to answer with the signal between Yelverton and Clearbrook. But with luck on my side and minutes on my actually freedompop, I got to call a customer who I booked for this evening on the way home and a rep talking about a bundle with Farcry 5 but never sent me the list, ah well.

I then got on the main road, the hill was pushing me and lorries were getting busy and then the breezy downhill in Roborough was ready. Knowing me I ended up getting there and missing a turning but it didn't matter at all.

I then made my way towards wool well sbd the George, which then it was queues and roadworks that weren't even here on Sunday, but causing some mayhem along the way. I meant maybe, the queues were getting long, pavements cut off and having to cross as lights were changing and then it was more stressful moments when I just past the Derriford roundabout when I paused and received a text.

The customer said "she doesn't need you today", well that was fucking great. Like I know things can be tricky but I could have gotten a vlog edited up and things so I had to just accept it and it made me decide to go visit somewhere that was said to me from a friend and from the girl I had the fate we from a freebie. Rogers Wholsale Foods . I got maps open on my phone and we went from b&q to here.

The ride to Rogers


New things get fun, I managed to make my way to the pace, with buses behind me and roads to cross, it was not a long long journey but it wasn't a quick 5 minute run like the old me would guess.
After the roundabout passing over the a38, I made it, despite no easy directions to where this place was in the Barrington business park. But I made it and time to have a look.


I got the bike parked and started to look around, deals were instantly showing themselves off like Lucozade zero, dry milk Oreo mint and peanut butter, sifetsives and so much, in a nice aisle that was actually one way as well.

So many deals I looked at such as pear and elderflower cabs for £5 of a 24 pack case, Doritos heat kick, vegetable crisps, curry mango sauce,  burger sauce and even peanut butter, like massive jars which I could use for so many fun things. Indrefisnets were showing off as well and then I saw Aloe vera juice, so well I got some £4. 00 for w case of 12 is a decent value. But I then saw somecchw9mein stock for £3.00 to add in. Even though I didn't see any sign of things can NOT be bought individually, 8 saw others with bits so I thought like a sheep that you can. So I loaded up a few cans of pear and elderflower, fairy milk Oreos, kettle crisps, burger sauce and a few more.


Which all seemed good until just as I was about to pay, the rep with a green hoodie, fair brown hair with a ponytail and nice eyes and slim figure approached me and said that you can only buy in cases in the most polite way. I replied, "okay so I have to our mist of this back since I only gave my rucksack" she was okay and offered to even shelf the things I removed from the case after she helped me load up the bottles from the box into the rucksack for me before paying £6.00. Which there were no accrual bags offered either which means that if you don't have your 9wn or no car, you are fucked.


After loading it up, I decided to cycle home via transitway and then customers near Tavi. But BM stores was the next part, with the road back and then cars driving behind me before turning down a hill and passing a bridge to get to Tesco before then biking via Matlan to bm stores.
Eventually, I managed to park by a fence, dog poo near the bike but missed by a small step. Wiring guarding the Italian border, it was time for me to visit.

This was you typical bm store for the beginning. Deals the fridge, an empty fridge (snow days still causing havoc across the UK) and food food food. It was all good and casual chats happening nearby until I got out the thing to buy which wax a diffuser. Now, this was actually 2 attempts to look for it since it was hidden and also by the electrical aisle, some nice deals and one was an instant buy for work which is cheaper than a TP-link distributor I deal with. So 2 added in, then I looked at screwdriver sets and didn't see iPhone esque tools in there, so I skipped it, but wallpaper and paint were in off her which was a new guess too.

I left and now it was a painful time.


I saw this a lot but it felt it. From having to keep a rhythm to get up the hill past transitway and then the queues back in Derriford before the roadworks that were narrow and more wanting as a dual carriageway was feeling longer than it was. But so much energy was killing me before I just HAD to have a drink and so I used the aloe vera juice. Cucumber and cantaloupe was the full way to go. And bot it feels retrieving and also slightly milky at the same time, sure there was calcium inside but not milk.

Now I got going with an empty bottle by my chest so I don't fly tip and then made my way to Yelverton. Ouch Ouch ouch, it was getting irritating to move and I then stopped off to the toilets.

Now I saw Joe, then went toilet and got myself done up while seeing dirt and puddles on the floors, not ideals bug then it was the Donald route to get to where I needed. Which was fun until the road I needed was CLOSED. Especially with sheep staring at me, i turned back around  then saw a bridleway that led nowhere before a hill which then after turning left and then following the road, another hill that was just steep and painful that i had to WALK up sick if was that bad bug a drink was to reward when I was nest the top of it. Before turning left and down to this customers place which was right down the hill. 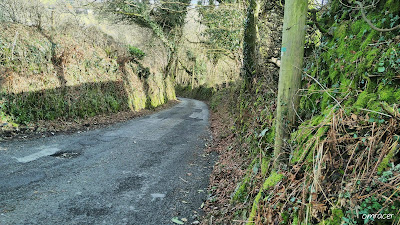 I made it and then helped her out with a lesson and a few fixes before i got out and it was an evening to grind my legs back home, with hills up and down to pass, main roads to briefly use when rush hour was happening and well it was 40 minutes to get home and then it was a nagging of lifting hangs have i Just arrived home and putting the bike away in a shed. Then ask for work tomorrow with a delivery be forec8 had an ice just potato for tea along with some casual extras.


And there you gave it. A busy unproductive ish day and with 2 blogs done this week, this weekend i will try a catchup vlog soon.